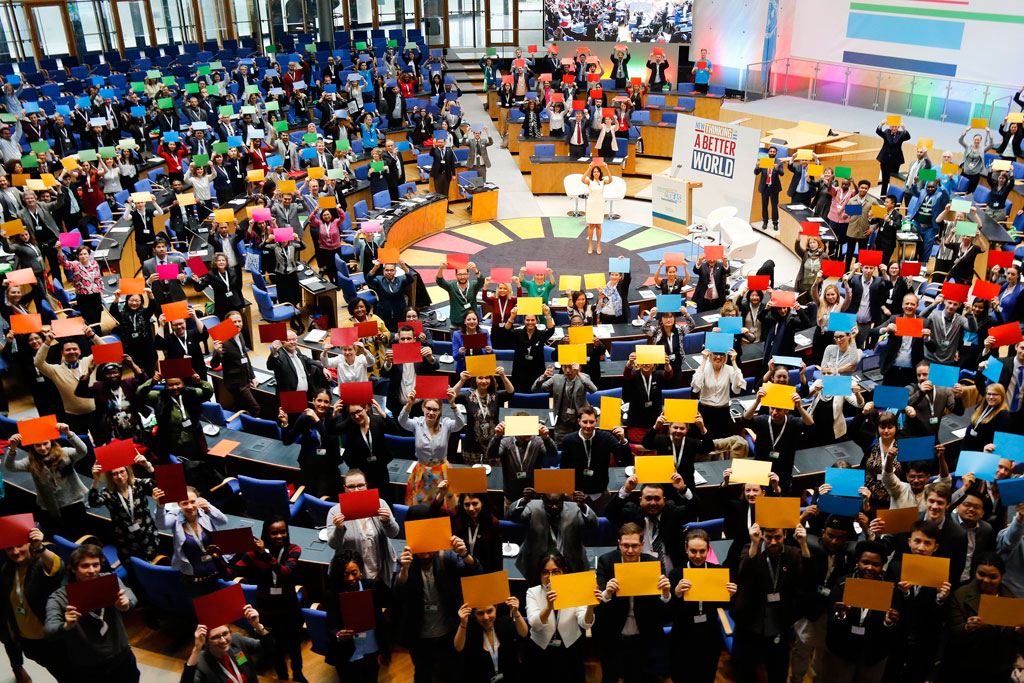 Hands-free gardening for a greener future, video gamers using their skills to help achieve the United Nations-led Sustainable Development Goals (SDGs) – these were just a few of the innovative and forward-looking ideas in the spotlight at the world body’s first ever ‘playable’ policy conference, held in the German city of Bonn.

The Global Festival of Ideas for Sustainable Development, a UN conference that aims to chart a new way of thinking on addressing some of the world’s most complex development challenges, wrapped up today, after three days of intense debates and ‘game-playing.’

Among the technology experts, gamers and activists putting their heads together to figure out how best to help countries implement the UN vision of a more just and equitable world where no one is left behind, was Ryan Hooks, manager of a software company called Huxley, who showed off his ‘hands-free gardening” app.

“It’s an AI (Artificial Intelligence) and augmented reality for plants. Greenhouses that use hydroponics to circulate the water are very complex systems and it’s hard to scale water efficient food solutions. I’ve found that augmented reality and AI can be really useful for reducing labour cost,” he told UN News.

To demonstrate the app’s capabilities, Mr. Hook pointed his phone at a plant on the table and his app identified it as “apple mint.”

“It’s augmented reality, it knows what kind of plant it is, what percentage its health is, when to pick it, pack it, ship it and the environment (around it), so people can have hands-free augmented gardening,” he explained.

The hands-free gardening app, Mr. Hooks continued, makes it more efficient to use hydroponics, a method of growing plants without soil, which also uses 95 per cent less water to grow plants.

Participants at the Festival were also engrossed in the 2030 Hive Mind game, where they played for a hypothetical country, planning policies, and convincing other players to join forces with them.

The Festival organizers say that the game, which focuses on the SDGs and the 2030 Agenda, reveals the tough choices and trade-offs that might have be made along the road to sustainable development for all over the next 13 years.

Tom Juntunen, of the U Begin company, was playing for Goal 9, which focusses on building resilient infrastructure, promoting inclusive and sustainable industrialization and foster innovation.

When Mr. Juntunen is not at his booth in the exhibit, he walked around the conference centre trying to convince other players to support his policies.

“There’s a lot of negotiations, it’s a very robust simulation of real life dynamics with policy negotiation. Everyone has what’s important to them and what’s not important. In playing the game, you experience the parallel of that in a virtual environment. It is challenging as it is in real life,” he said of Hive Mind 2030.

‘Communicating the SDGs’ and the 2030 Agenda

“We have to make the world aware of this […] agenda that is definitely going to transform the planet and that is going to ensure that no one is left behind,” Cristina Gallach, the UN Under-Secretary-General for Communications and Public Information, said yesterday.

“The more we communicate about the SDGs and make people aware of the agenda, the more the governments we will be accountable and will ensure that it is implemented,” she added.

The UN Department of Public Information (DPI), headed by Ms. Gallach, is the Organization’s entity tasked with informing the wider world on the SDGs and ensuring that the 17 goals are known and understood.

To that end, 17 ‘icons’ – each with a designated bright colour, short name phrase and single image – have been created to illustrate each Global Goal.

The icons have also been translated in over 50 languages, from Czech to Bahasa Indonesia, and the number is growing.

The Global Festival of Ideas, the first in a series of annual forums, is hosted by the UN SDG Action Campaign in partnership with the Overseas Development Institute (ODI) with the support of the German Government.