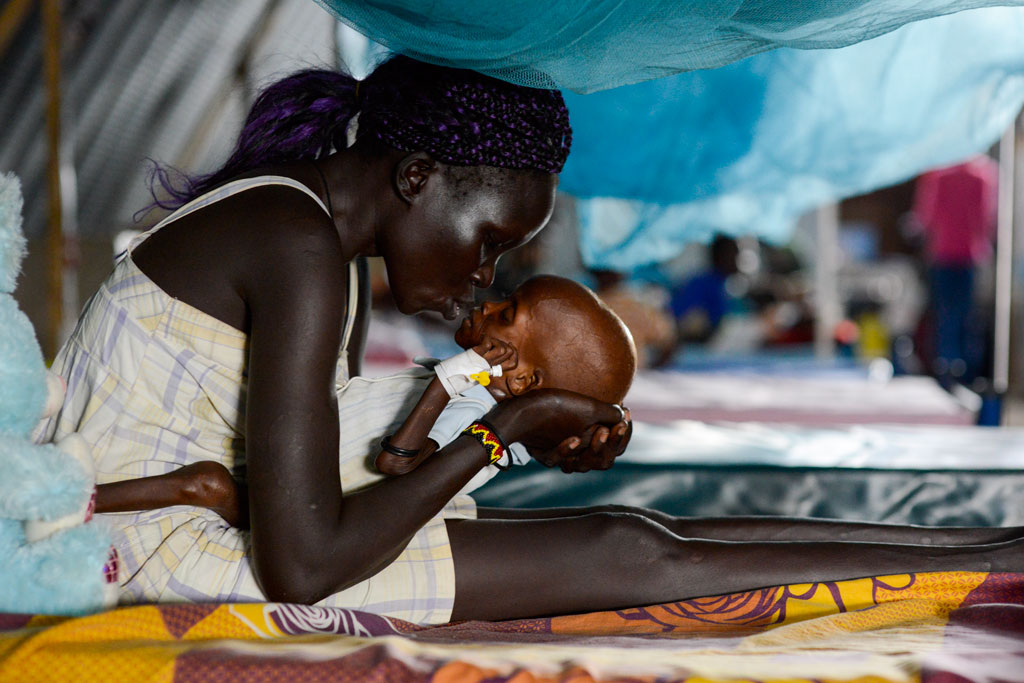 Hundreds of thousands of people in South Sudan will starve unless relief workers gain access to needy populations and more funding is raised, the United Nations Emergency Relief Coordinator warned after meeting malnourished children who fled the raging conflict in the country.

Stephen O’Brien, who is also the Under-Secretary-General for Humanitarian Affairs, travelled to Ganyiel, Southern Unity state, considered one of the most violent areas in the fight for political control of the country.

Among the people he met was a starving boy whose grandmother carried him through waist-high swamp to get away from the fighting. His parents are apparently missing.

“1000s similar. Horrendous,” Mr. O’Brien wrote on social media, posting a number of photos of people who had fled the fighting and sexual violence.

Humanitarian partners, such as the International Red Cross, are setting up clinics directly in the swamps to reach more people, he noted. Some people with nothing to eat survived by chewing on water lilies.

“Millions of people prevented from receiving aid by parties to conflict. Immoral, unlawful and unacceptable. We need access now,” Mr. O’Brien has said.

He is in South Sudan to see first-hand the critical humanitarian situation and the response which his agency, the Office for the Coordination of Humanitarian Affairs (OCHA), is assisting.

The UN declared a famine in parts of South Sudan on 20 February, increasingly blaming the lack of food and the collapsing economy on the rival forces of the Sudan People’s Liberation Army (SPLA) loyal to President Salva Kiir and the SPLA in Opposition backing Riek Machar.

A formal declaration of famine means that people have already started dying of hunger.

About 100,000 people are facing starvation, and an additional one million are on the brink of a famine, according to the UN. The total number of food insecure people is expected to rise to 5.5 million at the height of the lean season in July if nothing is done to curb the severity and spread of the food crisis.

The situation is worsened for the 3.4 million Sudanese, some of whom Mr. O’Brien met, who have been displaced and separated from their families.

Humanitarian organizations have appealed for $1.6 billion to provide life-saving assistance and protection to some 5.8 million people across South Sudan in 2017.

Mr. O’Brien came to South Sudan from Kenya and previously, from Yemen. He is next scheduled to visit Somalia.