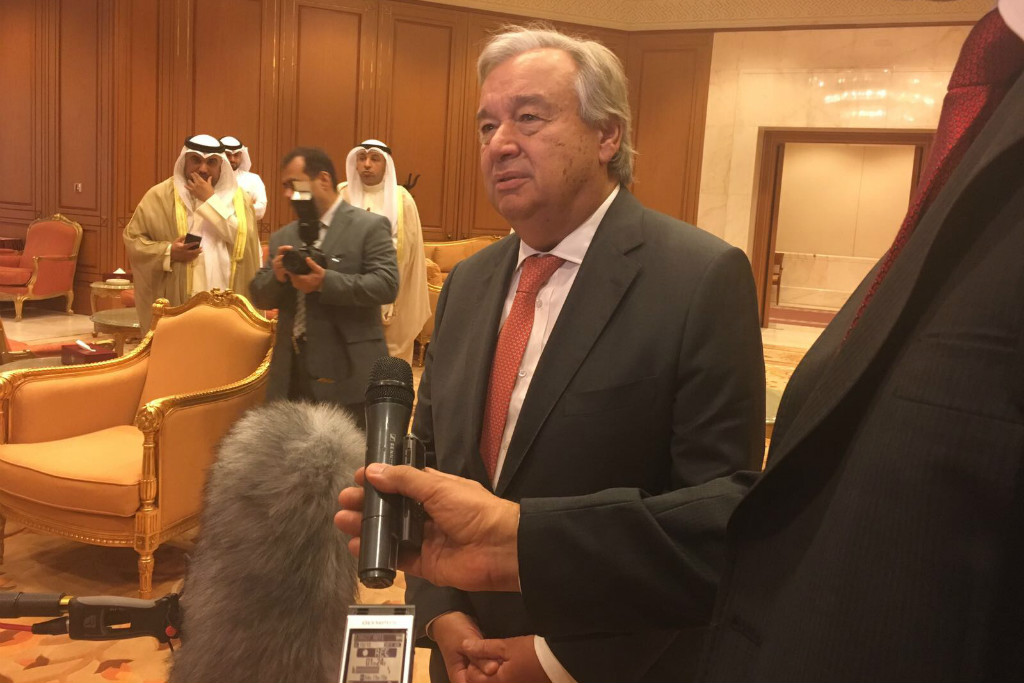 United Nations Secretary-General António Guterres, on an official visit to Kuwait, expressed gratitude to not only the Gulf country’s leadership in humanitarian action, but the “dialogue […] and promotion of understanding Kuwait has shown in relation to all conflicts in the region.”

Speaking to reporters after meetings with the Amir of Kuwait, Sheikh Sabah Al-Ahmad Al-Jaber Al-Sabah, Mr. Guterres recalled that during his tenure as UN High Commissioner for Refugees, the Amir had presided over three conferences to mobilize the international community to support the Syrian people “suffering so much with the war that has been going on and on.”

“But it’s not only the humanitarian leadership of Kuwait, it’s the wisdom, the dialogue, the promotion of understanding that Kuwait has shown in relation to all conflicts in the region,” explained Mr. Guterres, adding: “Kuwait has no agenda. The agenda of Kuwait is peace; is understanding.”

As for the current crisis in the Gulf, the Secretary-General said “the position of the UN is very simple: we are here to support the Kuwaiti mediation.”

Indeed, this visit had been an occasion to express deep appreciation and raise ideas about ways to strengthen the cooperation and dialogue between Kuwait and the UN, “as we believe Kuwait is an extremely reliable partner in our common commitment to peace and security around the world.”

Taking questions from reports, Mr. Guterres said that he and the Amir had discussed all the very difficult situations of the region, including Yemen, Syria, “the drama of the Palestinian people,” Libya, and the need to make sure that Iraq is able to come together in unity after defeating the Islamic State of Iraq and the Levant (ISIL/Da’esh).

“All of these aspects were discussed in a very detailed way. I had the opportunity once again to express my deep appreciation for all the initiatives that Kuwait has had in the relation to the solution to these crises,” stated the UN chief.

Asked about plans to begin negotiations in Kuwait on the crisis in Yemen, the Secretary-General said the UN is doing its best to create the conditions for the present stalemate to be overcome. “Kuwait has been very successful in the first conference that was organized. We will be working very closely with the [parties] to see when and how a new strong initiative will be possible,” he stressed.

To a question on getting aid through Saan’a airport or Hodeida port, Mr. Guterres said that his Special Envoy for Yemen, Ismail Ould Cheikh Ahmed, is pushing to create the conditions for both Hodeida and Saan’a to allow for an effective use, for humanitarian purposes, of these two very important infrastructures.

“I hope it will be possible for an agreement to be achieved between the parties to allow for Hodeida and Saan’a to be fully operational for the humanitarian needs of the Yemeni people who are suffering in such a terrible way. They deserve our solidarity and our commitment,” he stressed.

Prior to the start of his bilateral meetings, the Secretary-General went to UN House to meet with the staff. He thanked them for their hard work and dedication, and encouraged them to continue to strengthen the relationship between the United Nations and Kuwait.

While in Kuwait City, Mr. Guterres also had separate meetings with Sheikh Sabah Khalid Al Hamad Al-Sabah, First Deputy Prime Minister and Minister for Foreign Affairs, and Marzouq Al-Ghanim, Speaker of the Parliament, along with other members of the legislative body.

The Secretary-General left Kuwait for Israel on Sunday evening.