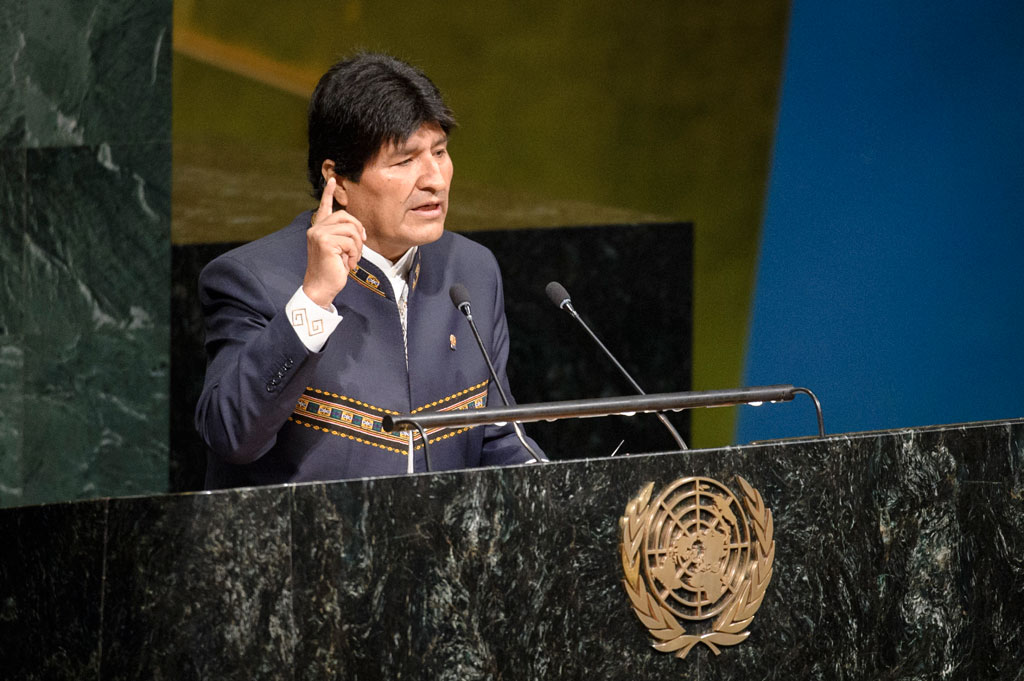 Endorsement of the principles of the United Nations Declaration on the Rights of Indigenous Peoples does not equal implementation, speakers told the UN General Assembly today at a special meeting to celebrate the Declaration’s tenth anniversary and renew commitment to its tenets as a vital solution towards attaining a just and sustainable world.

Since the Declaration’s adoption, global awareness of indigenous peoples had grown. However, progress had been inconsistent within countries and uneven around the world, Durga Prasad Bhattarai, Vice-President of the General Assembly told the High-level event to mark the 10th anniversary of the landmark UN Declaration.

“To fulfil the commitments made under the Declaration,” he said, “stronger partnerships – built on a foundation of trust – must be forged between among Governments, indigenous peoples, the United Nations, civil society, the private sector and other key stakeholders.”

He invited the international community to renew its commitment to indigenous peoples, work collaboratively to achieve the Declaration’s aims and secure a world in which the rights of all indigenous peoples were promoted and protected.

Indigenous peoples ‘can make their own future,’ Bolivian President says

Delivering the keynote address, Evo Morales Ayma, the President of Bolivia, described how the indigenous movement in his country had brought together other sectors of society, including transport workers and the middle class, to build a new Bolivia.

“There are no issues in which indigenous peoples could not or should not be involved,” he said, explaining that for centuries, they had resisted ‘invaders’ who sought to extinguish their identity. Indeed, indigenous people around the world shared the same history.

Describing war as the direct product of capitalism, he pointed out that, for the rich, there is no crisis as they continued to accumulate wealth on the backs of the poor. “Humanity is in danger,” but that is a challenge, not destiny. “Indigenous peoples have shown that we can resist. Brothers and sisters, we can and we must.”

And indeed, indigenous peoples can make their own future. What had been achieved in Bolivia – a country that had gone from a colonial State to a sovereign and plurinational one – demonstrates what could be done at a global level. “Indigenous peoples are the moral compass of humanity, with their own ways of organization and production,” he stressed, adding that their responsibility is to organize a global fight “to save humanity and the world.”

rights of Indigenous peoples, several tools should be used, including the three relevant United Nations mechanisms — the Permanent Forum, the Special Rapporteur and the Expert Mechanism. In addition, the UN system-wide action plan and ongoing consultations could also be used to help to amplify indigenous voices in the Organization’s processes.

While hailing the progress made this far, Andrew Gilmour, the Assistant Secretary-General for Human Rights said: “The struggle is far from over. Although the Declaration was approved 10 years ago, many of the obstacles that led to its enactment are still present today. Endorsement of its fine principles, alas, does not equal implementation.”

So once again, the indigenous movement – with its diverse voices, including those of indigenous women, youth, and persons with disabilities – is “rising to meet the challenge of making the Declaration a reality,” he said pointing, to the ‘water protectors’ in Standing Rock, South Dakota, in the United States, as well as those speaking up for their rights, from Nepal to Mexico, who are insisting that their informed consent must be sought.

Yet, extractive industries continued to destroy their land, seeing the indigenous populations on them not as a vital element, but as an obstacle. Human rights defenders were being killed. The Office for the UN High Commissioner for Human Rights (OHCHR) has called for follow up on enforcing indigenous peoples’ rights.

The private sector must be aware of the Declaration’s principles, he stressed, adding that information about the rights of indigenous peoples should be part of the business schools’ curriculums. To foster progress at the country level, his Office is working towards building national action plans.

Also addressing the meeting, Mariam Wallet Aboubakrine, Chair of the Permanent Forum on Indigenous Issues, said the Declaration reflects a global consensus, with some countries such as Canada taking leadership positions after having had initially voted against the instrument in the General Assembly.

“The Declaration outlines a range of rights,” including with regard to land, education, health and to freely determine political status, she said, adding that the principles of free, prior and informed consent are a critical factor in the Declaration. However, while implementation progress continued, the situation on the ground is “grim,” with indigenous peoples living shorter lives and having limited political participation.

Advocating for the Declaration’s principles to be realized on the ground, she said political will is needed. More than 200 frontline defenders, half of whom had been defending land, had been killed in 2016. Those and other situations must be addressed and remedied.

For her part, Victoria Tauli-Corpuz, Special Rapporteur on the rights of indigenous peoples, said her first report had pointed to two challenges to implementing the Declaration: a lack of awareness and understanding about the human rights instruments; and States’ difficulties for States to translating them into practical steps.

On promoting awareness and understanding, the results of her predecessor’s work had seen the reversal of position by the four countries – Australia, Canada, New Zealand and the United States –that which had originally voted against the Declaration in the Assembly.

“The Declaration is an essential tool for reconciliation, a much much-needed process in countries where indigenous peoples continue to suffer gross human rights violations,” she stated, but stressed: “The most fitting way to mark the Declaration’s anniversary is to honestly identify and confront the obstacles it faces for effective implementation at all levels.”