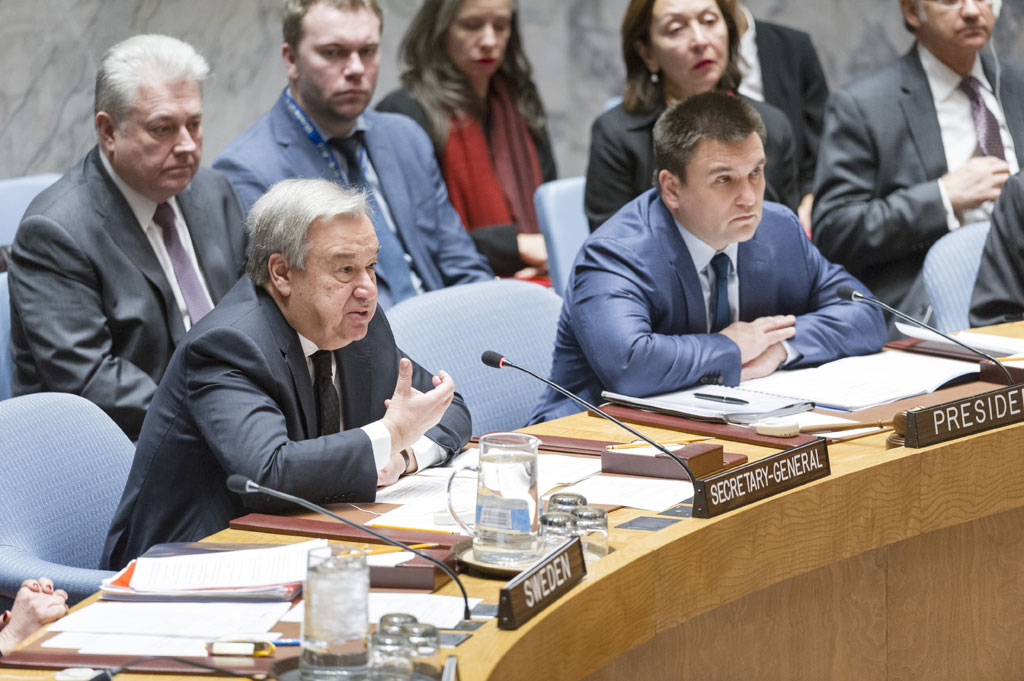 Noting that recent crises in Europe show that the continent remains at risk from new outbreaks of conflict, United Nations Secretary-General called for reinforcing mutual trust and respect to strengthen stability and cooperation both within Europe and beyond.

The Security Council meeting at which the UN chief delivered this message started with a moment of silence in memory of the Permanent Representative of Russia to the United Nations, Vitaly Churkin, who passed away yesterday.

“I think [the Ambassador’s] passing represents a deep loss for all of us in the UN, including in this Council, where his distinctive voice was ever-present for the past decade, and where, I think, we will all miss that voice in the sessions to come,” said Mr. Guterres in his tribute.

“Conflict in Europe is not only a tragedy for those directly involved: those killed, injured, displaced, who have lost loved ones, who may be unable to access healthcare and are missing vital years of their education,” Mr. Guterres said, adding: “It is also reversing development gains and preventing communities and societies from achieving their full potential and contributing to regional and global prosperity.”

Noting that no single factor is responsible for the emergence and continuation of conflicts, he said that in many cases, peace agreements were “simply not being implemented.”

Other factors included challenges to democratic governance and the rule of law, and the manipulation of ethnic, economic, religious and communal tensions for personal or political gain.

“Whatever the causes may be, the inability of regional and international institutions, including our own, to prevent and resolve conflicts is seriously undermining their credibility and making it more difficult for them to succeed in future,” added the UN chief.

Speaking specifically on the conflict in Ukraine, Mr. Guterres said the UN remains committed to supporting a peaceful resolution, in a manner that fully upholds the sovereignty, territorial integrity and independence of Ukraine, and in accordance with relevant Security Council and General Assembly resolutions.

He also noted that the UN fully supported the efforts within the Normandy Four, the Trilateral Contact Group, and the OSCE Special Monitoring Mission, and that it has repeatedly called for the full implementation by all sides of all of their commitments under the Minsk Process, both in letter and in spirit.

“I urge all stakeholders to avoid unilateral steps or attempts to create facts on the ground, which further complicate and endanger efforts to find negotiated settlements. This is especially relevant in view of the latest actions taken in relation to the conflicts in eastern Ukraine and the South Caucasus,” he highlighted, urging all sides to give the highest priority to protecting civilians.

In his remarks, Mr. Guterres also spoke of challenges to peace in other parts of Europe, such as in the Balkans, Cyprus, Georgia, Moldova and South Caucasus, as well as on the long-standing name issue between Greece and the former Yugoslav Republic of Macedonia.

He also noted new challenges and threats such as the phenomenon of populism, nationalism, xenophobia and violent extremism were both causes and effects of conflict.

“I encourage Member States, this Council, regional mechanisms and all stakeholders to intensify their efforts to define a peace and security agenda to address today’s complex challenges,” urged Secretary-General Guterres.

“The status quo is not sustainable.”