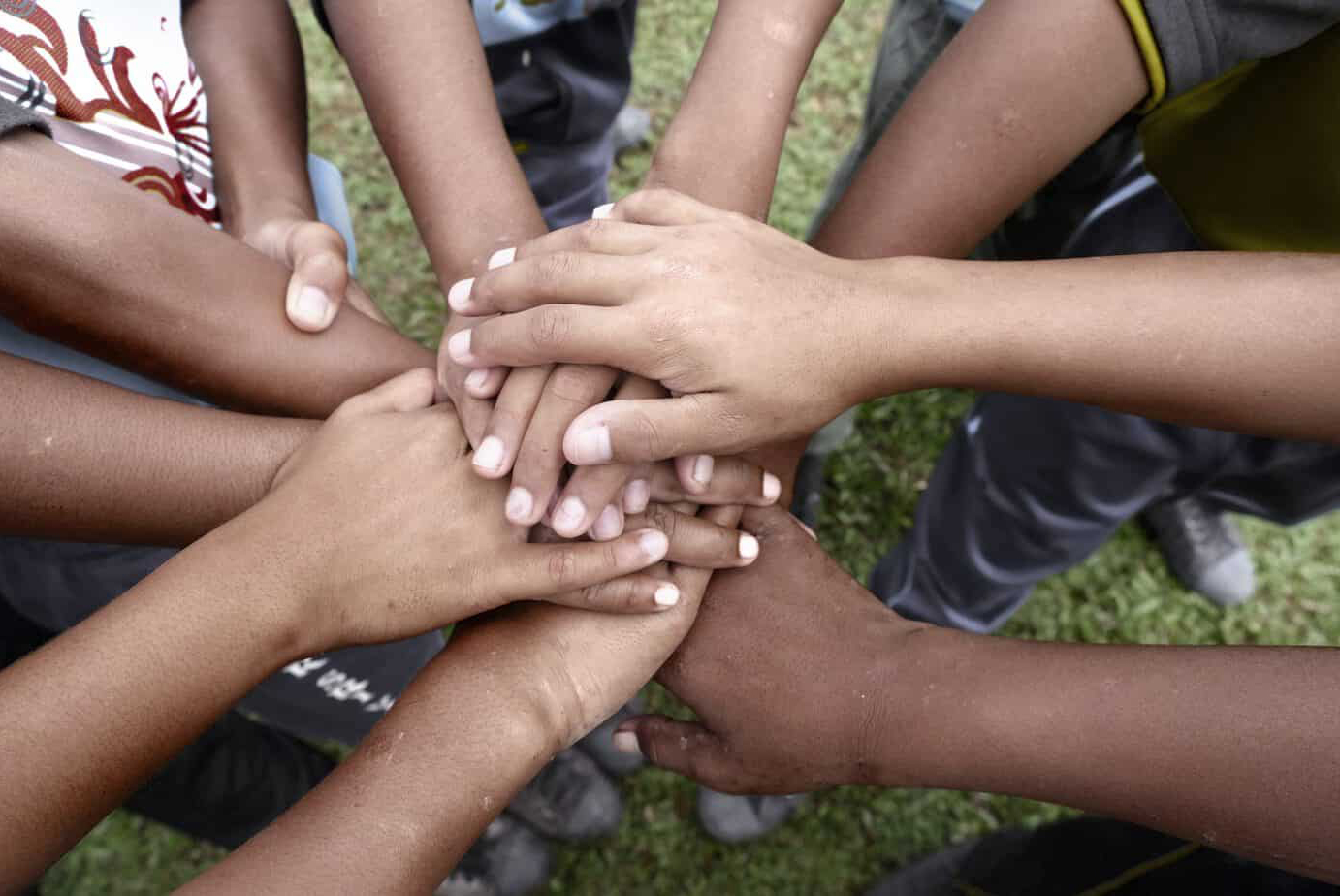 In 2020, a wave of Black Lives Matter movements unfolded across the globe. These movements re-focused a spotlight on Australia’s fraught relationship with its First Peoples. In particular, the movements increased community awareness of the disturbing reality that Aboriginal and Torres Strait Islander peoples (which I will refer to as First Nations peoples) are the most incarcerated peoples on the planet.

Former Prime Minister Kevin Rudd described this phenomenon as an ‘Indigenous incarceration epidemic’. In the midst of the COVID-19 pandemic, this description is a timely reminder of the life-threatening and destructive impact of epidemics and pandemics alike.

Distressingly, the rate at which First Nations peoples are incarcerated continues to climb each year.

In 2020, the statistics are staggering:

A First Nations teenage boy is more likely to go to jail than go to university.

This increasingly worse situation presents a real barrier to Australia’s advancement of its UN commitment to reduce inequality under UN Sustainable Development Goal 10.

The rate at which First Nations peoples die in custody is significantly higher than that of non-Aboriginal prisoners, a reality fundamentally at odds with the Australian spirit of a ‘fair go for all’.

I sat down to discuss this issue with Patrick Mercer, a Wadawurrung man, and Neerim Callope a Kirraewhurrong and Gkuthaarn man. Patrick is currently working with Indigenous and culturally diverse communities at Diabetes Victoria and has an academic background in ancient history and Indigenous studies. Neerim works in the Indigenous justice policy space, namely with the Victorian Aboriginal Justice Agreement, to deepen the dialogue between First Nations communities and the Victorian Government to improve justice outcomes for Aboriginal Victorians.

Patrick and Neerim explained that the high rates of incarceration today are the result of the historic and persisting exercise of power and control over First Nations peoples.

As a complicated and sensitive issue, I have done my best to communicate the key messages that Patrick and Neerim raised in our conversations. Given that pre- and post-colonial policies affecting First Nations peoples were, and are, similar across Australia, many of the causes of overrepresentation can be explained by common threads. This article does not intend to oversimplify this issue or paint a pan-Aboriginal experience with history or the present moment.

1. Origins of overrepresentation: a history of dispossession, disruption and disempowerment

The Royal Commission into Aboriginal Deaths in Custody found that the most significant contributing factor bringing First Nations people into conflict with the criminal justice system was their disadvantaged and unequal position in wider society.

I began by asking Patrick and Neerim about how First Nations peoples arrived at this position in society. Patrick and Neerim started by speaking about some of the most devastating impacts on Aboriginal self-determination and sovereignty during the British colonial era.

A fundamentally destructive impact on Aboriginal self-determination and territorial sovereignty was the British declaration that Australia was terra nullius (vacant land) and thereby property of the British crown. This declaration was made on the basis that First Nations peoples were not human beings and therefore unable to be sovereign over their lands.

Patrick explained that this British colonial relationship of power, exclusion and control over First Nations bodies was codified under Australia’s federation in 1901. For example, until 1967, under the Australian Constitution First Nations peoples were considered as ‘flora and fauna’ instead of human beings. This constitutional characterisation, among many other policies, prevented First Nations peoples from being independent political agents, denying the ability to engage politically in society.

Patrick explained that in parallel, colonial paternalistic policies denied First Nations peoples the ability to act as independent economic agents. For instance, Neerim explained that up until as recently as the 1970s, First Nations peoples were placed on government-run missions which removed the possibility of independently or meaningfully engaging in the workforce or economy. Patrick stated that:

“When you start to break down a person in this way you remove the fundamental tenets of what defines them as a human being.”

Neerim and Patrick emphasised that over 200 years of dispossession, disruption and disempowerment has been deeply formative in shaping the significant social and economic inequalities that First Nations peoples face today. Neerim explained that this painful history continues to manifest itself in the hearts and minds of First Nations peoples as intergenerational trauma.

2. The present as a product of the past

I asked Neerim about how colonial and post-colonial experiences have impacted First Nations peoples’ disproportionate engagement with the criminal justice system today.

“That’s the past but we are products of the past.”

Neerim poignantly asked: how can we expect First Nations peoples and communities, within such a short period of time, to be on par with the rest of society following generations of disempowerment, micromanagement and the inability to engage politically or economically in society?

Neerim spoke about how once First Nations peoples were removed from the missions, many struggled to engage in the everyday society that they had long been excluded from. Neerim explained that the agency to take control of their lives that had been taken away generation after generation and in many cases inevitably led to a dependency upon government welfare.

Neerim noted that the underlying causes of increased contact with the criminal justice system are well known. These causes include: disengaging from school, unemployment, involvement in child protection or out-of-home care systems, poor mental health, social exclusion due to racism, substance abuse, cognitive impairment, being a victim of family or sexual abuse, and substandard or inadequate housing.

Neerim recognises the benefits of conducting further quantitative research into which of the underlying factors outlined above are the key predictors of First Nations peoples coming into contact with the criminal justice system.

Addressing the root causes of overrepresentation will require more than just a reform of Australia’s criminal justice system. It is recognised that one of the most powerful ways to address overincarceration is to empower First Nations peoples and communities by restoring self-determination and sovereignty. This will allow for a recalibration of the power imbalance that has long existed between First Nations peoples and wider Australia.

I asked Patrick and Neerim about the Aboriginal-led ‘Voice, Treaty, Truth’ framework (part of the Uluru Statement from the Heart) and other key initiatives as part of a broader path forward to reconfiguring this relationship and addressing overincarceration .

Patrick spoke about how a voice to parliament through which First Nations peoples would have a say on the laws which affect them would be a critical piece of infrastructure in empowering Aboriginal communities to take control of their future. In this context, Neerim emphasised the importance of the First Nations voice being the driving voice in policy discussions about legislation that affects them. There are also currently Aboriginal-led discussions about enshrining this voice to parliament into the Australian Constitution.

Neerim explained the importance of reflecting the principle of self-determination into the justice system and spoke about his work on the Victorian Aboriginal Justice Agreement. This agreement established a dialogue between First Nations communities and the Victorian Government with the aim of improving Aboriginal justice outcomes and reducing incarceration rates.

Another key example is justice reinvestment, whereby funding earmarked to be spent on imprisonment is redirected into community-led projects aimed prevent offending in the first instance.

First Nations peoples have been on the Australian continent for at least 65,000 years (if not 120,00+). First Nations peoples have the world’s oldest living cultures and at one time had over 250 language groups and over 500 sovereign nations. However, for more than 200 years, Australia denied the existence of Aboriginal sovereignty. As noted above, this denial was based upon the doctrine of terra nullius which assumed that First Nations peoples were incapable of being sovereign over their lands. This doctrine was overturned in the High Court case of Mabo in 1992 which recognised that Aboriginal peoples had land rights long before the British arrived and that those rights could still exist today.

Patrick and Neerim explained how the establishment of a formal treaty between First Nations peoples and settler Australia would legitimise a relationship of respect between two sovereign peoples, Indigenous and settler. A treaty would assist in transforming the relationship between settler-coloniser and colonised, based on force, into an equal relationship of host and guest. As the guests, settler Australia would have a number of rights and responsibilities as to how it would come onto, share and access the land of which the First Nations’ host owns.

In Victoria, there are currently treaty negotiations underway. Patrick emphasised that given the difficulties in establishing Aboriginal heritage, and therefore treaty recognition, negotiations must be undertaken meaningfully, in good faith and must not be rushed. Patrick also noted the importance of normalising discussions around a treaty, in particular dispelling uninformed fears about First Nations peoples taking large swathes of Australian land from private ownership (fears voiced during the Lands Rights movements of the past).

Patrick explained that the trauma experienced by First Nations peoples has left deep and intergenerational wounds that remain unresolved. This fraught relationship requires healing and reconciliation. Patrick explained that a truth-telling commission or ‘Makarrata’ (A Yolgnu word  meaning ‘coming together after hostilities’) is essential in reconfiguring our relationship and our understanding of one another. It is recognised that this process must facilitate an honest and considered understanding of colonisation and the trauma and dispossession that First Nations peoples suffered in the years after. It is also recognised that these historical wrongs need to be openly addressed in order to move the nation forward. Recently, Victoria has launched a truth commission into ongoing effect of violent colonisation on Aboriginal people.

Patrick noted that truth telling is the easiest aspect of the healing process to implement, as it doesn’t require legal change, but it could also be the most difficult to execute as parties will need to meaningfully engage in the process. Patrick spoke about how:

As part of a broader truth-telling process, both Patrick and Neerim spoke about need to reform school curriculum to reflect an accurate, honest, and culturally contextualised account of Australian history.

Patrick and Neerim spoke about the importance of reforming a number of laws in addressing overincarceration, including:

A broader approach must also be taken to addressing and rooting out systemic racism within the justice system. For example, in Western Australia a First Nations person is almost 20 times more likely to be fined for a seatbelt offence than a non-First Nations person.

“The criminal law must be used as a tool of last resort, and that efforts must be taken to keep people, especially young people, out of the criminal justice system.”

This approach will have a significant effect on reducing perpetual cycles of institutionalisation and recidivism.

Resolving the trauma that lies at the core of Aboriginal overincarceration requires the whole of Australia to come together. This can take many forms and every person has a part to play. We are all living in Australia and we must choose action over apathy.

Patrick and Neerim spoke about contributions that non-First Nations peoples can make, including:

Now is the moment, as an Australian community, to come together to listen and to learn from First Nations peoples. Now is the moment to properly address the injustices of the past and to recontextualise our understanding of one another. For not only will this reduce the rate at which First Nations peoples are incarcerated, it will also allow us to move forward as one community grounded in mutual respect, equality and understanding.