Unsplash/Aalok Atreya Countries must “double-down” on their efforts to stop the spread of COVID-19 coronavirus, the UN health agency said on Wednesday, after announcing that the global emergency can now be described as a pandemic. UN Secretary-General António Guterres described the declaration as “a call to action – for everyone, everywhere.”

Speaking in Geneva, World Health Organization (WHO) Director-General Tedros Adhanom Ghebreyesus insisted that the fact that the term was being used did not mean that the virus had the upper hand.

Latest data indicates more than 118,000 cases of infection in 114 countries, and 4,291 deaths – a 13-fold increase outside China in the past two weeks, and a threefold rise in the number of affected countries.

With thousands more “fighting for their lives” in hospitals, Tedros noted that the toll was likely to climb in coming days and weeks.

Despite this bleak forecast, the WHO Director-General pointed out the vast majority of countries were still relatively untouched by COVID-19, which first surfaced in central China last December.

Around 90 per cent of cases were in just four countries and China and South Korea had seen “significantly declining” numbers of cases, he added.

Show solidarity with the most vulnerable : Guterres

The UN chief said in a message released late on Wednesday, that the new pandemic phase in the fight, was “a call for responsibility and solidarity – as nations united, and as people united.”

“As we fight the virus, we cannot let fear go viral”, he added, noting that “together, we can still change the course of this pandemic – but that means addressing inaction.”

“The best science tells us, if countries detect, test, treat, isolate, trace and mobilize their people in the response, we can go a long way to mitigating transmission.”

He called on every government to step up and scale up their efforts, adding that “as we mourn all those who have lost their lives and the many families who are suffering, we must show solidarity with the most vulnerable – the elderly, the sick, those without reliable healthcare, and those on the edge of poverty.

81 nations still with no reported cases

In addition, 81 countries have not reported any cases “so they should do everything to not import cases”.

Another 57 countries have reported 10 cases or less, the WHO top official said, “so they can cut it from the bud”.

Briefing journalists at WHO headquarters in Geneva, Tedros insisted that it would be “a mistake” for countries to abandon efforts to contain the virus.

“The best way forward is the blended comprehensive approach which puts containment as a major pillar,” he said, noting that some countries were “struggling with a lack of resources”, while others were battling with their resolve.

For many countries, tackling the virus involved making enormous sacrifices, Tedros added, before underscoring his gratitude to Iran “and others for taking measures which are taking a heavy toll on societies and economies.”

“The best way forward is the blended comprehensive approach which puts containment as a major pillar,” he said, noting that while some countries were “struggling with a lack of resources”, others were battling with resolve.

Asked about whether countries should close their schools, borders and airports as a precautionary measure, Dr. Mike Ryan, head of the WHO’s health emergencies response, said that this was decision for national governments.

Their action was based on their assessment of the level of risk and the acceptability of the measure, he explained, before reiterating the effectiveness of “chasing” down the virus.

“Reducing social distance can certainly slow down the disease, but it’s a poor substitute in countries with a lower number of cases,” he explained. “It’s a much more cost-effective measure to identify those who are infected and isolate them.” 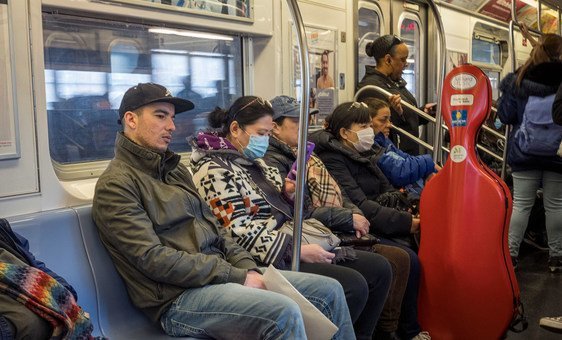 On Iran, where the situation is still “very serious” amid shortages of equipment, Dr Ryan appealed for greater support clinical care within the country and from the international community.

In Iran and Italy – where there are nearly 900 people in intensive care – Dr Ryan underscored the intense stress placed on health workers and the need to show solidarity and support for these countries, rather than apportion blame.

While these countries were currently “in the frontline” of the emergency and “suffering”, “but I guarantee other countries will be in that situation very soon.”

He added: “The caseload, the demand on the health workers, and the dangers that come with fatigue and potentially shortage of people, we must all move quickly.”

“We must move quickly…we can get into the game of whether countries are doing enough…but we have health workers who need help, hospitals who need our support. ”

While WHO’s advice to countries has not changed, the hope is that the announcement of a pandemic will focus Governments to adopt sufficiently stringent measures immediately.

In particular, Tedros said, countries should push ahead in four key areas: prepare and be ready, protect and treat, reduce transmission and innovate and learn.