Ms. Bachelet, taking part in a panel discussion, held at the UN Human Rights Council on Tuesday, said that the Beijing Declaration should be celebrated but noted that the Plan of Action agreed at the event is still unfinished.

According to Ms. Bachelet, the risks of setbacks to women’s rights are real, and growing. The rights chief noted that, whilst the Beijing conference is recognized as a demonstration of strong collective commitment to human rights, the scenario 25 years later is quite different.

We must resist all challenges to the hard-won affirmation of what we know: women’s rights ARE human rights, and they are not negotiable. Human dignity cannot be dissected, compartmentalized, compromised – nor can it be a privilege of few.#IStandWithHer#Beijing25 https://twitter.com/UNHumanRights/status/1232376578501414915 …

The Beijing Platform for Action was nothing short of revolutionary. We should always celebrate it, but we must remind ourselves that the Beijing agenda is unfinished. The risks of setbacks are real & growing – @mbachelet: http://ow.ly/pFrq50yvJZY  #HRC43#IStandWithHer#Beijing25 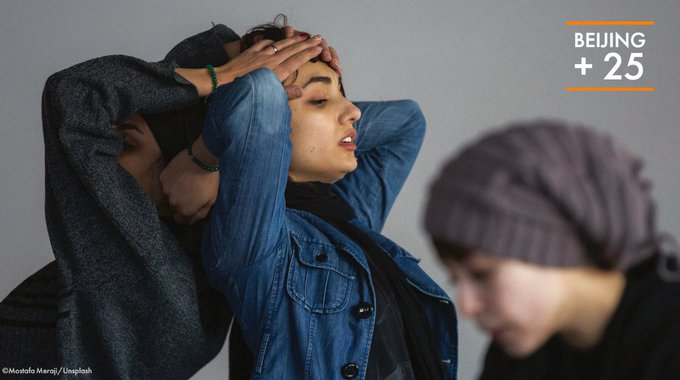 “Women’s rights are threatened and attacked” on many fronts, she warned, adding that there over this period there has been “a backlash and the resurgence of gender inequality narratives based on age-old discrimination”.

However, for the UN human rights chief, women’s rights are not negotiable: “they cannot be an optional policy, subject to the changing winds of politics,” she warned. According to Ms. Bachelet, the women’s rights agenda must not be torn apart by the establishment of a hierarchy between what is acceptable and what is deemed “too sensitive”.

Ms. Bachelet called on the international community to “resist any challenge to a hard-won affirmation, namely that women’s rights are human rights. “Human dignity cannot be dissected, compartmentalized, negotiated, nor be the privilege of the few,” she said.

However, Ms. Bachelet declared that the gains made since the 1995 declaration were nothing less than revolutionary: “although we are still far from parity, the number of women national parliamentarians has almost doubled. More than 150 countries now have laws on sexual harassment. The number of child marriages has decreased worldwide”.

The High Commissioner highlighted the progress noted in the recording of data on violence against women worldwide. In addition, the percentage of women in gainful employment has increased, and more than 140 countries guarantee gender equality in their constitution.

As part of his Call to Action for human rights, Mr. Guterres called on every country to “support policies and legislation that promote gender equality, to repeal discriminatory laws, to end violence against women and girls and to strive for equal representation and participation of women in all areas”.

In his speech, Mr. Guterres also worried about “setbacks to women’s rights, alarming levels of feminicide, attacks on women’s rights defenders, and the persistence of laws and policies that perpetuate submission and exclusion”.

“Violence against women and girls”, he said, “is the most widespread human rights violation”.

Ms. Bachelet affirmed that the Beijing agreement was neither a coincidence nor an accident, but rather the result of deliberate action by governments, civil society and other partners.

“Over the past 25 years, we have built up good practices and are well equipped to speed up progress even more,” she said, asking stakeholders to rediscover the “unity and vision, as well as the purpose and determination that prevailed in Beijing”.

Phumzile Mlambo-Ngcuka, the Executive Director of UN-Women reported “slow and uneven progress” on women’s rights, including the gap in the labour market.

“Although the employment rate has decreased in recent years, many women are employed and doing unpaid domestic work”.

Violence against women and girls persists, and remains a globally endemic crisis, she said, adding that more measures must be adopted, and Member States must reaffirm forcefully the commitments made in the Beijing Platform for Action.