The UN agency devoted to ending AIDS as a public health threat is calling on top politicians and governments across the world to ensure the right to quality healthcare is upheld, and not just a privilege to be enjoyed by the wealthy.

In a press release issued as the World Economic Forum gets fully underway in Davos, Switzerland, on Tuesday, UNAIDS Executive Director Winnie Byanyima said that the right to health “is eluding the poor and people trying to lift themselves out of poverty are being crushed by the unacceptably high costs of health care”, with at least half the world’s population unable to access essential health services.

Every year 100 million people are pushed into extreme #poverty paying for health care. That’s three people every second. Health cannot be a privilege of the rich. It is a human right that belongs to all. #HealthForAll #WEF2020 #WEF20 #Davos2020 #SDGs #UHC #FightInequality 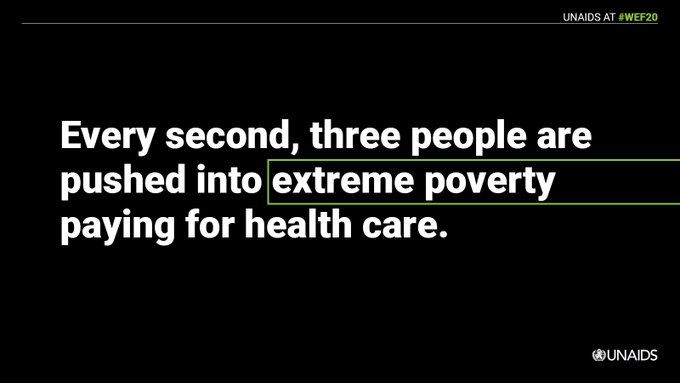 “The richest one per cent benefit from cutting-edge science while the poor struggle to get even basic health care,” she added.

The independent international Forum (WEF) in Davos is an annual gathering, committed to improving the state of the world by engaging business, political, academic and other leaders in reshaping the economic agenda.

Every two minutes a woman dies while giving birth, said the agency, with vulnerable women, adolescents, people living with HIV, gay men and other men who have sex with men, sex workers, people who inject drugs, transgender people, migrants, refugees and the poor, among the billions being left behind.

Nearly 100 million people are pushed into extreme poverty (defined as living on $1.90 or less a day) because they have to pay for health care, and more than 930 million people – around 12% of the world’s population – spend at least 10% of their household budgets on health care, said UNAIDS.

In many countries, people are denied health care or receive poor quality health care because of unaffordable user fees. Stigma and discrimination denies poor and vulnerable people, especially women, their right to health.

Women and girls most vulnerable

Every week, 6,000 young women around the world continue to become infected with HIV. In sub-Saharan Africa alone, four out of five new HIV infections among adolescents are recorded among girls, and AIDS-related illnesses are the biggest killer of women of reproductive age in the region. Despite significant progress in reducing AIDS-related deaths and new HIV infections, there were 1.7 million new HIV infections in 2018 and nearly 15 million people are still waiting to receive HIV treatment.

“Publicly financed health care is the greatest equalizer in society” said Ms Byanyima. “When health spending is cut or inadequate, it is poor people and people on the margins of society, especially women and girls, who lose their right to health first, and they have to bear the burden of caring for their families.”

Governments must do better

Delivering health care for all is a political choice that too many governments are not making, said the agency. For example, Thailand has managed to reduced mortality rates for children under the age of five, to 9.1 per 1000 live births, while in the United States of America the rate is 6.3 per 1000 live births, even though Thailand’s gross domestic product per capita is about one tenth of that of the United States.

That success can be attributed to Thailand’s publicly financed health-care system that entitles every Thai citizen essential health services at all life stages and leaves no one behind, UNAIDS maintains.

South Africa had just 90 people on antiretroviral therapy in 2000, but in 2019 had more than 5 million on HIV treatment. The country now has the largest HIV treatment programme in the world.

And tax avoidance on the part of the top one per cent, and the wealth that they control, continues to deny resources to healthcare the world over, the agency maintains.

“It is unacceptable that rich people and big companies are avoiding taxes and ordinary people are paying through their ill health” said the UNAIDS chief. “Big companies must pay their fair share of taxes, protect employee rights, provide equal pay for equal work and provide safe working conditions for all, especially women.”

According to the International Monetary Fund, as of April 2019 half of low-income countries in Africa were either in debt distress or at a high risk of being so. Beyond low-income countries, in Zambia there was a 27% drop in health-care investments and an increase of debt servicing by 790% between 2015 and 2018. Similar trends were seen in Kenya, where debt servicing increased by 176% and health investments declined by 9% between 2015 and 2018.

In at least 65 countries, a same-sex sexual relationship is a crime, with a knock-on effect in formal legal rights to healthcare, including hospital and insurance access. In recent years in some countries, crackdowns and restrictions on lesbian, gay, bisexual, transgender and intersex people have increased. Sex work remains a criminal offence in 98 countries, notes the agency.

Progress can be made