The UN Deputy Secretary-General has called for gender equality, women’s empowerment and women’s rights to be integrated at the heart of global efforts to achieve a sustainable future for all.

Amina Mohammed was speaking on Monday in Nairobi, where countries are meeting this week to mark 25 years since the International Conference on Population and Development (ICPD).

The landmark gathering held in Cairo concluded with a Programme of Action “that placed individual dignity and human rights, including the right to plan one’s family, at the very heart of development”, according to the UN Population Fund (UNFPA).

Child marriage is a #humanrights violation that threatens the health and lives of girls around the world. 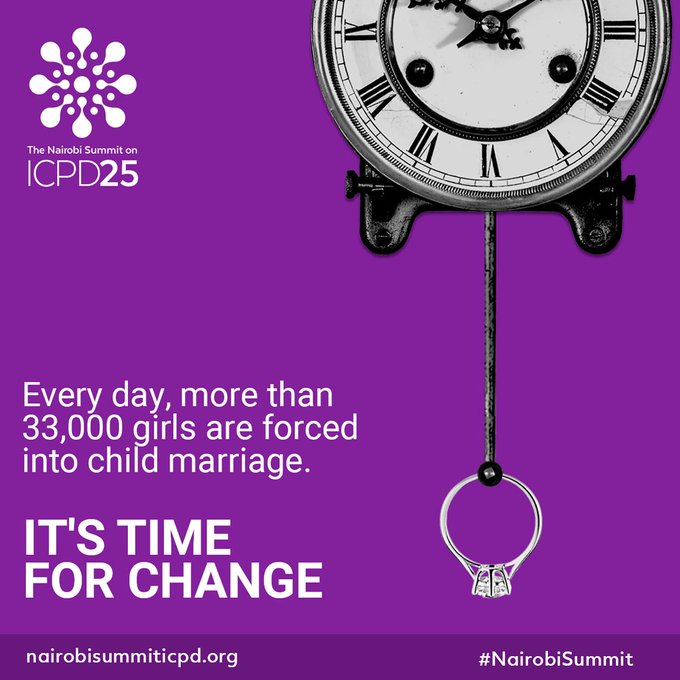 Ms. Mohammed acknowledged that although “significant gains” have been made since its adoption, progress is fragile and millions are being left behind.

“The world is still a difficult, and often dangerous, place for hundreds of millions of women and girls,” she stated.

“To make it even more complex, leaders across constituencies are reneging the promise of Cairo, the promise to secure a just future for our youth especially our girls.”

The UN deputy chief outlined some of the tragedies that befall women and girls across the world, including dying during childbirth and being forced into early marriage.

At the same time, five million pregnant women displaced by conflict or disaster require medical care, while more than 230 million women worldwide cannot prevent pregnancy because “they do not have access to the contraceptives they need and have a right to.”

Ms. Mohammed said the Programme of Action “has never been more relevant” in the current era of urbanization, increased migration, and rising population.

“We urgently need to mobilize political and financial momentum to advance the ICPD agenda, particularly around harnessing the demographic dividend, reducing preventable maternal and child mortality and the unmet need for family planning, and eliminating violence and harmful practices against women and girls,” she said.

Twenty-four independent UN human rights experts are also pressing countries to reaffirm their commitments and “fulfil the ambitious commitments” made in Cairo.

“The push back against women’s rights from religious fundamentalists and political conservatives that oppose women’s rights are particularly acute in the area of sexual and reproductive health and rights,” they said in a statement.

“Despite States’ clear human rights obligations in these areas, the strong opposition discourse seeks to retreat from the ambitions of the ICPD agenda, challenging women’s right to equality and relegating a woman’s role to only the family and procreation”.

Four years ago, world leaders meeting at the UN adopted the Sustainable Development Goals (SDGs) to create a more equitable and just world by 2030.

This will only be possible when the promise made to millions of women and girls 25 years ago is fulfilled, according to Ms. Mohammed.

“So, as we enter a Decade of Action for the delivery of the SDGs, let us seize this opportunity to build momentum and firmly integrate gender equality, women’s empowerment and women’s rights at the heart of our efforts to implement the 2030 Agenda,” she said.