As Australia’s “catastrophic” and deadly wildfire emergency continues, UN weather experts on Tuesday echoed Government warnings for people to remain vigilant in the face of the fast-moving threat and tinderbox conditions.

In Geneva, the World Meteorological Organization (WMO) noted that dozens of fires are raging, affecting around six million in eastern New South Wales state, and southeast Queensland, amid reports that three people lost their lives in the fires at the weekend.

“Apart from the immediate physical threat…when authorities issue a message of catastrophic fire danger, the message there is basically, “Get out, get away,’” Clare Nullis, spokesperson for the World Meteorological Organization (WMO), told journalists.

Citing Australia’s Bureau of Meteorology description of the situation as “evolving and dangerous”, Ms. Nullis said that conditions were likely to remain dry, with little to no rain forecast. 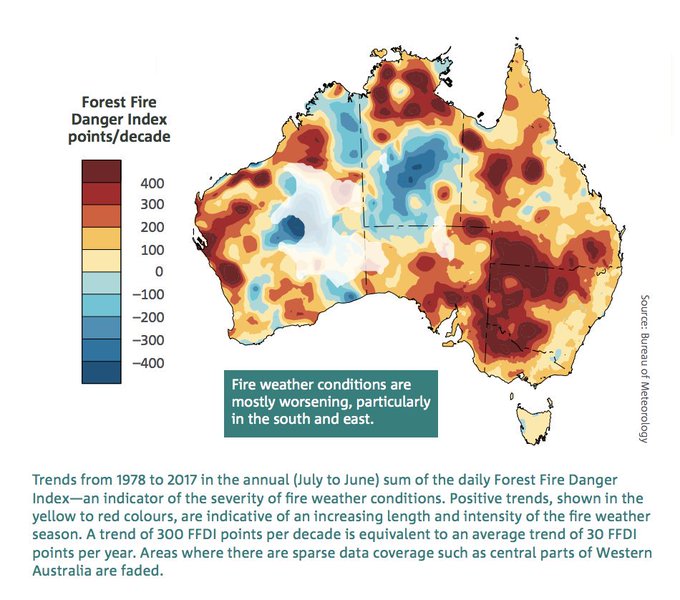 “The fires are due to a combination of factors including low soil moisture, heat and importantly, wind direction and wind speed,” she explained.

New South Wales has declared a state of emergency as parts of the state – including the Greater Sydney area and Queensland – face a “catastrophic” fire danger, which is the highest level of warning.

Although bush and grassfires are common in Australia, the emergency is linked to increasingly warm temperatures over the course of the last century.

“According to the Bureau of Meteorology of Australia, it’s been the second warmest January to October on record for Australia as a whole, and these are records going back 110 years,” Ms. Nullis said, adding that the number of days falling into the category of “fire weather days” has increased.

“The most extreme 10 per cent of fire weather days – which is how they measure the fire index – has increased in recent decades across many regions…There has been an associated increase in the length of the fire weather season and climate change including increasing temperatures, is contributing to these changes.”

According to WMO, many at-risk communities face winds of 60 to 80 kilometres per hour (37 to 50 miles per hour) and temperatures in the mid to high 30s Celsius (around 95 Fahrenheit).

Although a cool weather front that is forecast may ease fire dangers, “a combination of dry and gusty winds and a shift in wind direction will mean people in the impacted areas will need to remain vigilant”, Ms. Nullis insisted.

Between 1967 and 2013, major Australian bushfires resulted in over 8,000 injuries and 433 deaths, close to 50 per cent of all fatalities from major Australian natural disasters, excluding heatwaves, Australian Government figures show.