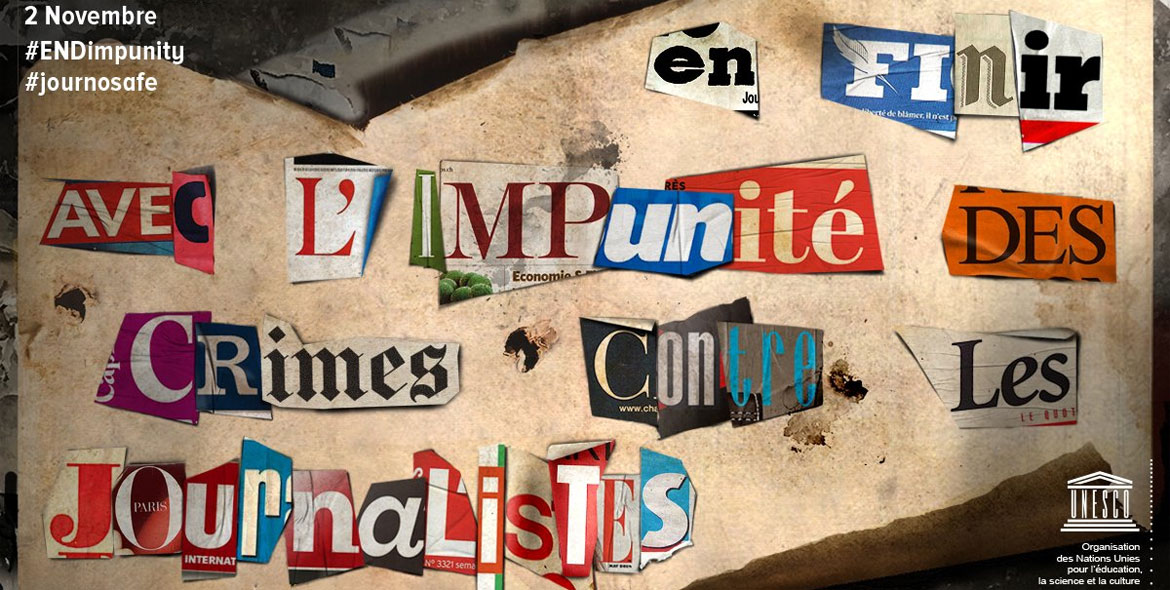 © UNESCO
International Day to End Impunity for Crimes against Journalists.

“Without journalists able to do their jobs in safety, we face the prospect of a world of confusion and disinformation”, UN Secretary-General António Guterres has warned in a statement released ahead of the International Day to End Impunity Against Journalists, which falls on 2 November.

“When journalists are targeted, societies as a whole pay a price”, added the UN chief. “Without the ability to protect journalists, our ability to remain informed and contribute to decision-making, is severely hampered”.

Killings and attacks on the rise

A new study from the UN Educational, Scientific and Cultural Organization, UNESCO, underscores the risks that journalists face, showing that almost 90 per cent of those found responsible for the deaths of more than 1,100 of them, between 2006 and 2018, have not been convicted.

The report, “Intensified Attacks, New Defences”, also notes that killings of journalists have risen by some 18 per cent in the past five years (2014-2018), compared to the previous five-year period.

The deadliest countries for journalists, according to the statistics, are Arab States, where almost a third of the killings took place. The Latin American and Caribbean region (26 per cent), and Asian and Pacific States (24 per cent) are the next most dangerous.

Journalists are ofen murdered for their reporting on politics, crime and corruption, and this is reflected in the study, which reveals that, in the past two years (2017-2018), more than half of journalist fatalities were in non-conflict zones.

In his statement, the Secretary-General noted the rise in the scale and number of attacks on journalists and media workers, as well as incidents that make their work much harder, including “threats of prosecution, arrest, imprisonment, denial of journalistic access and failures to investigate and prosecute crimes against them”.

A high-profile example is the murder of Maltese journalist Daphne Caruana Galizia in 2017. The case is being followed by independent UN human rights expert Agnès Callamard, among others, who has suggested that too little has been done by the Maltese authorities to investigate the killing.

On Friday, as Haiti continued to face a protracted, violent crisis that has led to the deaths of some 42 people, and 86 injured, UN human rights chief Michelle Bachelet called on all of those involved in the violence to refrain from targeting journalists, and respect the freedom of the media to do its job: at least one journalist is among those killed, and nine other reporters have been injured, according to Ms. Bachelet’s Office (OHCHR).

This year UNESCO has launched the #KeepTruthAlive social media campaign, which draws attention to the dangers faced by journalists close to their homes, highlighting the fact that 93% of those killed work locally, and featuring an interactive map created for the campaign, which provides a vivid demonstration of the scale and breadth of the dangers faced by journalists worldwide.

The Day is being commemorated with a flagship event in Mexico City next week on 7 November – an international seminar entitled “Strengthening regional cooperation to end impunity for crimes and attacks against journalists in Latin America” – and events are also taking place in 15 other countries, including an exhibition of press cartoons, under the headline: “Draw so as not to write them off”, at UN HQ in New York, which honours the memories of French journalists Ghislaine Dupont and Claude Verlon, murdered in Mali on 2 November 2013.