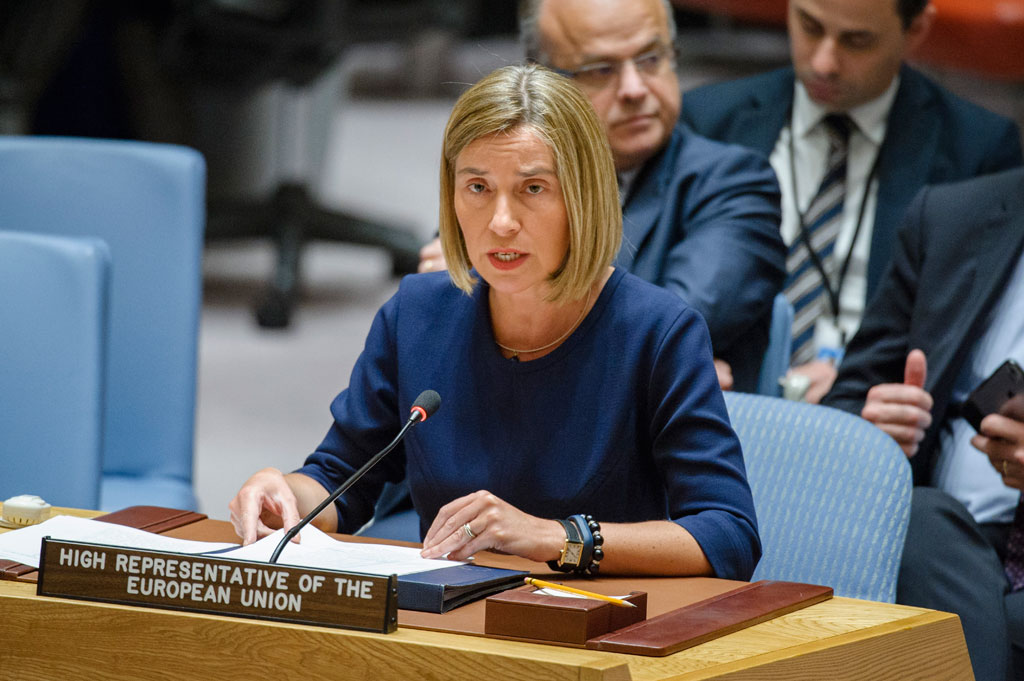 The European Union (EU) has become over the past 60 years of its existence, a “superpower for peace” focused not only on regional stability and security but also on sustainable development for all, which “explains why all our actions, all our initiatives are always taken in full coordination and partnership with the United Nations,” the EU’s senior most diplomat told the Security Council today.

“The European way is also the United Nations’ way. And we believe in the UN because we believe in the same principles, in the same values, and our communities are built upon the same fundamental ideals,” Federica Mogherini, High Representative of the EU for Foreign Affairs and Security Policy, told the Council today in her annual briefing on EU-UN cooperation.

Recalling that the European Union is marking its sixtieth anniversary “of choosing cooperation over confrontation,” she said the bloc has become not only the most successful peace project in the world, but also an indispensable partner to move beyond the current disorder, and to try to build together a more cooperative world order.

In recent months, some had thought that this anniversary would mark the decline of the European Union. “Our British friends have decided to leave us – which is very sad for all of us – but life goes on and so does the European Union,” Ms. Mogherini said, adding that since the UK Referendum last year, Europeans had recommitted to being “the strong and united power that our citizens and our partners need and deserve.”

The European Union is and will continue to be the reliable partner, she continued, stressing that “beyond our continent, we are the indispensable partner of a more cooperative, multilateral and peaceful world […] we are becoming a more reliable partner for our neighbours and friends, starting with the UN and NATO.” She offered a series of examples to illustrate the EU’s commitment, especially in the Balkans and in Africa.

EU member States contribute nearly 40 per cent of the UN budget for peacekeeping operations. Through its voluntary contributions, the EU also covers half the budget of UN funds and agencies, such as the World Food Program (WFP), the UN Children’s Fund (UNICEF) and the Office of the High Commissioner for Refugees (UNHCR).

So we will always return to this centre of gravity, this pivot of a rules-based international system. The European vision is the United Nations’ vision

“So let me be very clear, and speak directly to our American friends. It is essential for us that we all keep investing in these UN agencies. They are as important to global peace and security as defence spending – and sometimes even more. And we, Europeans, consider this support to the UN system as a crucial investment in our own security,” Ms. Mogherini stated.

She went on to praise the merits of a world order based on rules agreed upon and respected by all. It is for this reason that the European Union refuses to recognize the “illegal annexation of Crimea by Russia. It is for this reason also that the perpetrators of the chemical gas attack in Syria will be held accountable,” she said.

Ms. Mogherini said the greatest divide in today’s world “is between those who believe that international politics are a zero-sum game, and those who work to build win-win solutions and common ground.” She noted that the “European way” is in a constant search for win-win solutions to all international issues from climate change to peace and security, adding that the UN “represents a space where compromise can always prevail over confrontation.”

“So we will always return to this centre of gravity, this pivot of a rules-based international system. The European vision is the United Nations’ vision,” said Ms. Mogherini, adding that whoever wants to invest in this system, will find in the European Union a partner and a friend, a reliable, constructive, cooperative partner.