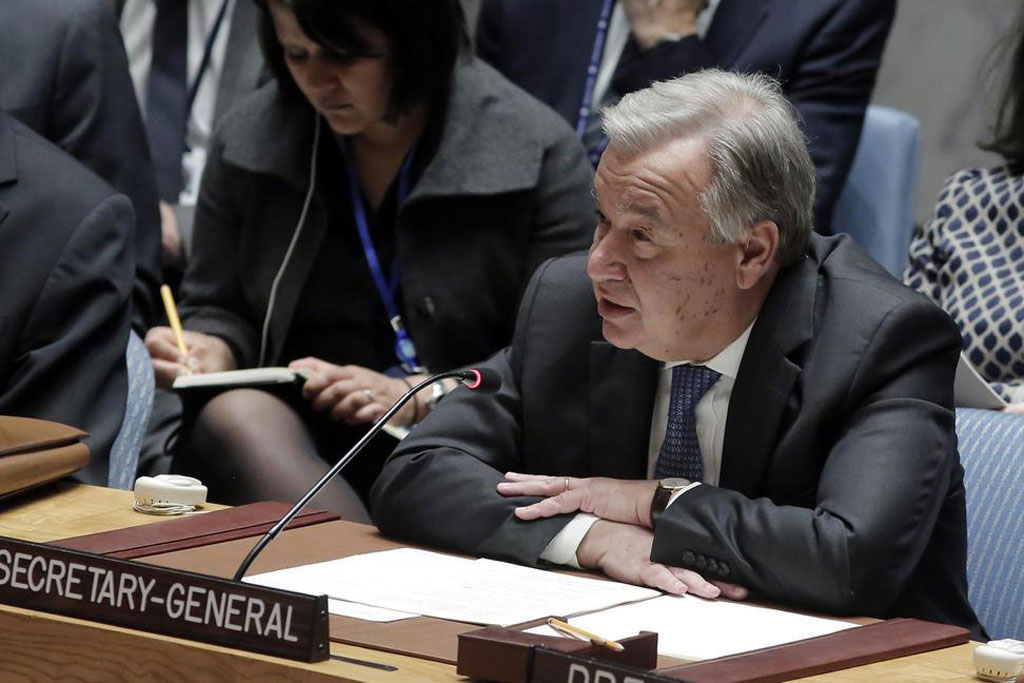 “Article 24 of the UN Charter is clear: the primary responsibility for the maintenance of international peace and security rests with this Council ‘in order to ensure prompt and effective action’,” said Mr. Guterres, speaking on the theme of Human Rights and the Prevention of Armed Conflict.

“We must collectively draw strength from the letter and spirit of the Charter to better prevent armed conflict and sustain peace through development [by] ensuring effective protection of all human rights – civil, political, economic, social and cultural,” he added.

Noting that peace, security, sustainable development and human rights are mutually reinforcing, the UN chief underscored that peace must be “relentlessly pursued” along the gamut of prevention, conflict resolution and peacekeeping to peacebuilding and long-term development.

He further stressed that close cooperation between the Office of the UN High Commissioner for Human Rights (OHCHR) and all relevant UN bodies, including the Security Council, is vital given that human rights concerns are fundamental to maintaining peace and security as well as essential to informing Security Council deliberations and decision-making.

Mr. Guterres also underscored the importance of unity within the Security Council and called on its members to “spare no effort to put an end to the intolerable suffering of the Syrian people”. “The failure to do so is a tragedy that shames us all,” he stressed.

Speaking on initiatives already taken by the Security Council, such as incorporating a human rights component in the mandate of UN peace missions, the UN chief noted that the systematic monitoring and reporting of human rights violations not only gave “a voice” to victims but also helped the fight against impunity.

That work also contributed to the protection of civilians under threat, helped build capacities and, in some circumstances, preserved democratic space.

“[However] despite all these efforts, millions of people still need to be protected from crises and far more time and resources continue to be spent responding to crises rather than preventing them,” noted the Secretary-General, underscoring that preventative efforts needed to be prioritized and root causes of conflict had to be addressed.

“That is the lesson of so many conflicts.”

He also stressed that ensuring improved and less politicised action on human rights is also vital for progressing on the Sustainable Development Goals (SDGs).

Concluding his briefing, the UN chief informed the Security Council that he has set in motion various reforms of the Secretariat which will enable it to play its role better and in keeping with the mandates and trust the UN Member States have place in it.

“The resolutions on sustaining peace and the 2030 Agenda for Sustainable Development are cause for hope,” he said, noting: “Progress on human rights aspects would further complement these advances.”