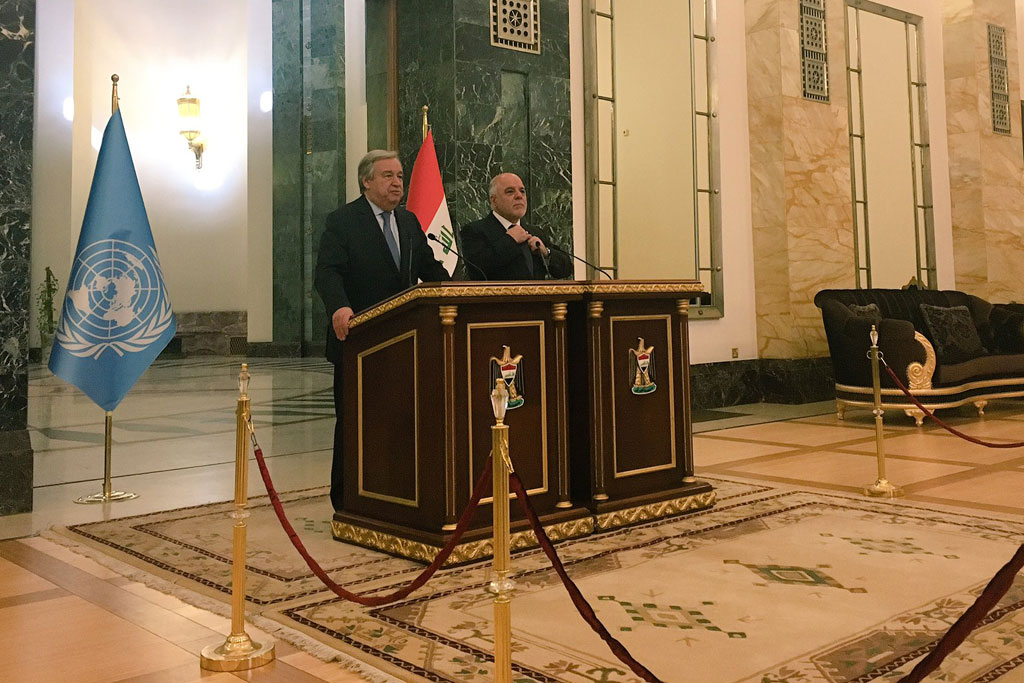 On what he called a “visit of solidarity” with Iraq, Secretary-General António Guterres today welcomed the commitment of the country’s leaders to civilian protection and national dialogue, and pledged the ongoing support of the United Nations as the Government seeks to bolster aid delivery to needy populations and rebuild Iraq institutions.

Noting that Iraq is in the final stages of its fight against terrorism, Mr. Guterres said the UN is “strongly hopeful” that the liberation of Mosul form the Islamic State of Iraq and the Levant (ISIL/D’aesh) will soon be complete.

“At the same time, I was extremely encouraged by the commitment expressed by the Prime Minister, both in relation to the protection of civilians, in the conduct of the operations and the full respect of international humanitarian law,” said the UN chief.

He said he was also encouraged by the Iraqi leader’s commitment to a national dialogue and an effective process of reconciliation. This, he said, would allow after the liberation of Mosul for Iraq to progressively create the conditions for, “a normal life of a State; a State in which all communities can feel they belong; a State in which all communities respect each other and reconciliation becomes something natural.”

Secretary-General António Guterres receives a bouquet of flowers on his arrival in Erbil, Iraq. UN Photo

Mr. Guterres went on to express the total support of the UN to the Iraqi Government’s efforts in humanitarian aid to the populations that have been affected by terrorism. At the same time, he appealed to the international community to support Iraq both in relation to the relief to the victims but also in relation to the stabilization, reconstruction and build-up of national institutions.

As for his talks with the Prime Minister, the Secretary-General said the two felt it was important that the Da’esh is held accountable for the crimes committed by the terrorist group.

“Those crimes need to be well known, need to be punished,” he said, stressing that it is important that the international community is fully of the terrible sacrifices of all the populations of Iraq –Sunni and Shia, Muslims and Christians ¬– that were victims of the cruelty of Da’esh. “This is something that needs to be known and that needs to find the adequate mechanism of effective accountability.”

The UN chief said the world’s young people must understand that “terrorism is not the way to express their anger […] even if in some moments they might be angry or anxious in relation to the events that take place.” Indeed, the fight against terrorism must be accompanied by the fight to tackle its root causes, and by making it very clear the horrendous nature of the crimes committed by organizations like Da’esh.

Finally, the Secretary-General expressed to the Prime Minister, his “total solidarity, and our total commitment to work together with your Government.” Iraq’s leaders have a very important task ahead with the full liberation of the country and with the full reconciliation of Iraqis “for a future of democracy and prosperity.”

While in Baghdad, he also met with the Iraqi President, Foreign Minister and Speaker of the Parliament, before heading later in the day to Erbil. Mr. Guterres has been in the region since Monday, when he began his visit in Jordan. Yesterday, he addressed the Summit of the League of Arab States.