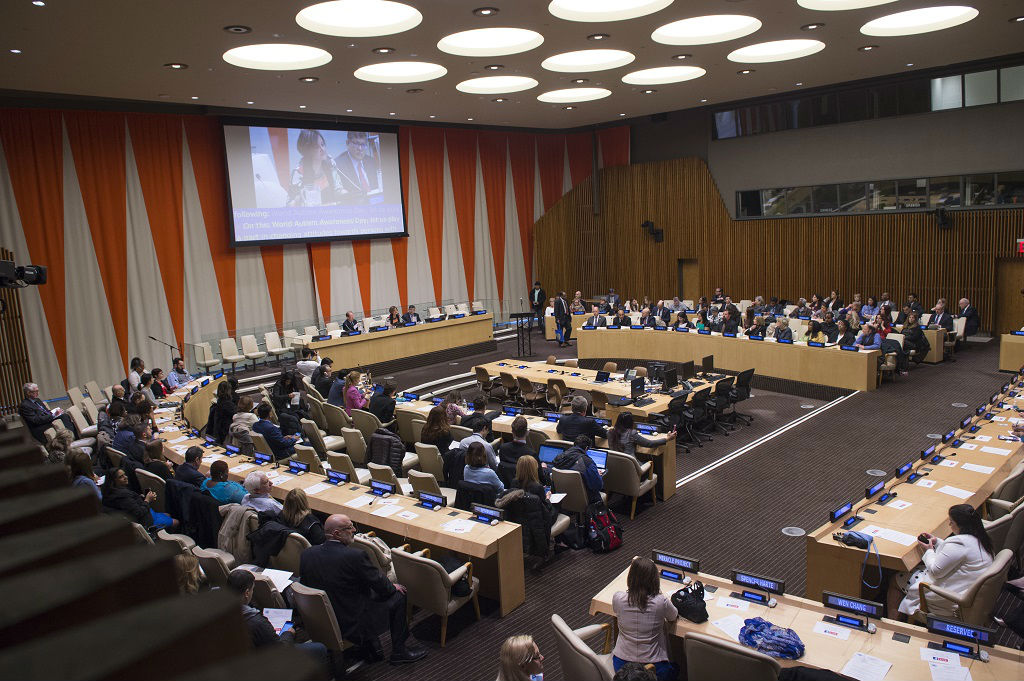 Ahead of World Autism Awareness Day, the United Nations called for recognizing the rights of people with the spectrum neurological condition, which is believed to affect 70 million people around the world.

“Let us ensure that we make available the necessary accommodations and support to persons with autism,” Secretary-General António Guterres said in his message for the Day.”

“With access to the support they need and choose, they will be empowered to face the key milestones in every person’s life,” he added, making decisions such as where and with whom to live, what type of work to pursue and how to manage their personal finances.

One in 160 children has an autism spectrum disorder, according to estimates by the UN World Health Organization (WHO). Around the world, one per cent of the entire population – possibly two per cent – is on the spectrum.

In a special event in New York ahead of the Day, marked annually on 2 April, the UN and the international community gathered to renew their commitment to raising awareness about autism and the need for people with the disorder to have equal opportunity and full participation in society on equal basis with other citizens.

Cristina Gallach, the Under-Secretary-General for Public Information, which co-organized the event along with the UN Department of Economic and Social Affairs, said in her opening remarks that to achieve an inclusive society, “we must ensure that the fundamental rights enshrined in the Convention on the Rights of Persons with Disabilities are known and respected.”

The Convention entered into force in 2008, to promote, protect and ensure the full and equal enjoyment of all human rights and fundamental freedoms by people with disabilities, and to promote their dignity.

In his statement, the President of the General Assembly, Peter Thomson said that awareness events, such as the one being held today, are important to helping people and their families lead more enjoyable lives.

“A lack of understanding of the causes, symptoms and effects of autism has in many cases led to a proliferation of misinformation, anxiety and confusion,” Mr. Thomson said in a statement delivered by Masud Bin Momen, Assembly Vice-President.

He called for early intervention programmes, health programmes and support services to ensure that people with autism can access education, training and jobs. “So that ultimately autism does not define them,” Mr. Thomson said, and they are seen “as who they are, people with ideas, capacities and contributions to make.”

The stigmatization and discrimination associated with neurological differences remain substantial obstacles to diagnosis and therapies.

“Autonomy and self-determination for people with autism cannot be separated from a discussion of their human rights,” said Simon Baron-Cohen, Director of the Autism Research Center at the University of Cambridge, in his keynote address.

Having studied autism for decades, Dr. Baron-Cohen said that many people on the spectrum have excellent attention to detail and the ability to spot patterns, for example, but need safeguarding because they trust people’s words as facts and have a hard time fitting in socially.

Referencing statistics, such as that half of people with autism are too afraid to leave their homes for fear that they will be taken advantage of, Dr. Baron-Cohen chided the international community.

“On the first human right, the right to dignity, as civilized nations, we are failing to protect the rights of people with autism.”

He defined autism as “an example of neurodiversity”, saying that “differently wired brains lead to different profiles of strengths and challenges, and should not be judges as better or worse. They’re just different. People with autism are asking for acceptance and respect.”

AUDIO: In terms of civil liberties for people with autism, the international community overall is living in “the Dark Ages,” Professor Simon Baron-Cohen, the Director of the Autism Research Centre at the University of Cambridge told a special event at UN Headquarters.