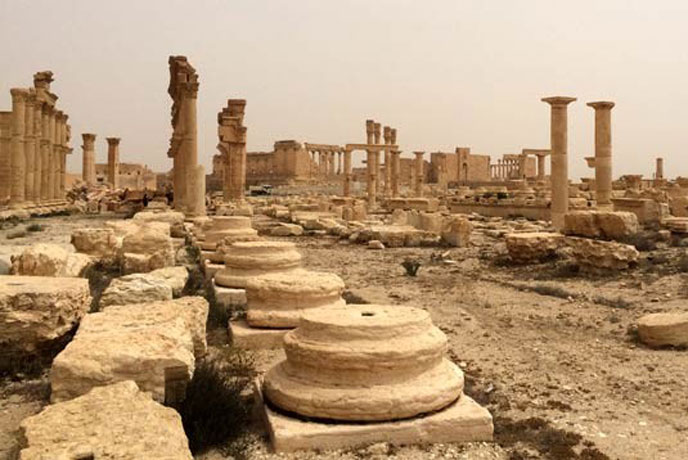 Amid the destruction of cultural heritage in Syria, including that of the famed tetrapylon and parts of the Roman theatre in Palmyra by the Islamic State in Iraq and the Levant (ISIL/Da’esh), the United Nations Security Council has reiterated that the terrorist group must be defeated and that the intolerance, violence, and hatred it espouses must be stamped out.

In a statement today, the 15-member Council also expressed alarm at reports of executions in the historic theater of Palmyra and expressed deep concern for the safety of thousands of residents inside the city as well as for the protection of the World Heritage site of Palmyra.

It also expressed concern that ISIL and other entities associated with Al-Qaida “have generated income from engaging directly or indirectly in the looting and smuggling of cultural heritage items from archaeological sites, museums, libraries, archives, and other sites in Syria, which is being used to support their recruitment efforts and to strengthen their operational capability to organize and carry out terrorist attacks.”

The Security Council also underlined the need to bring perpetrators of these acts to justice.

Earlier today, UN Educational, Scientific and Cultural Organization (UNESCO) had also condemned the destruction in the Syrian city and called on the international community to “stand united against cultural cleansing.”

The agency along with the Operational Satellite Programme (UNOSAT) at the United Nations Institute for Training and Research (UNITAR) had confirmed the destruction.

An oasis in the Syrian desert, northeast of Damascus, Palmyra contains monumental ruins of a great city that was one of the most important cultural centers of the ancient world. From the 1st to the 2nd century, the art and architecture of Palmyra, standing at the crossroads of several civilizations, married Greco-Roman techniques with local traditions and Persian influences.

Palmyra, however, has been on the list of World Heritage in Danger since 2013.

Calling the destruction “a new war crime and an immense loss for the Syrian people and for humanity,” UNESCO Director-General Irina Bokova underlined that “the protection of heritage is inseparable from the protection of human lives, and we must all unite to put this at the center of all efforts to build peace.”

“This new blow against cultural heritage, just a few hours after […] reports of mass executions in the theatre, shows that cultural cleansing led by violent extremists is seeking to destroy both human lives and historical monuments in order to deprive the Syrian people of its past and its future,” she added.

The tetrapylon was a monument marking a major road intersection along the colonnaded street of Palmyra. According to the UN cultural agency, it was a testimony to the grandeur of the era around 270 AD, during which Queen Zenobia had reached the height of her power.

Recalling its significance, Ms. Bokova said “the tetrapylon was an architectural symbol of the spirit of the encounter and openness of Palmyra – and this is also one of the reasons why it has been destroyed. Its position and shape are unique in ancient architecture and testified to the specificity of Palmyrene identity, as a source of pride and dignity for all Syrians today.”

UNESCO further noted that according to satellite images, Palmyra’s theatre – dating from the 2nd century AD and built in the center of a semicircular colonnaded piazza, to the southwest of the main colonnaded street – also suffered damage at its formerly well-preserved proscenium wall, decorated with ten curved and nine rectangular niches placed alternately.

In 2015, condemning the destruction and smuggling of cultural heritage in Syria and Iraq by ISIL and the Al-Nusrah Front, Security Council adopted a resolution that, among others, banned all trade in looted antiquities from those countries. It also encouraged steps to ensure such items are returned to their homelands, and called on UNESCO, Interpol, and other international organizations to assist in such efforts.