Philippine Red Cross
Students volunteer at a Red Cross logistics centre to pack relief goods for victims of the Taal volcano in the Philippines. The UN is concerned over warnings issued by Philippines’ authorities that volcanic eruptions on the country’s most populous island could last “days, months or even years”.

In explosive eruptions last Sunday, the Taal Volcano, located on the island of Luzon, some 70 kilometres south of the capital city of Manila, began to violently spew magma, which has led to the evacuation of more than 38,000 people to 198 evacuation centres so far, the UN Office for the Coordination of Humanitarian Affairs (OCHA) tweeted on Wednesday.

A time-lapse video of Taal Volcano, located in Batangas province, taken on 12 January when volcanic activity intensified and generated a tall steam-laden column of up to 15 km with volcanic lightning and wet ashfall that reached Metro Manila. (Video credit: I. Brinas-Pamintuan) 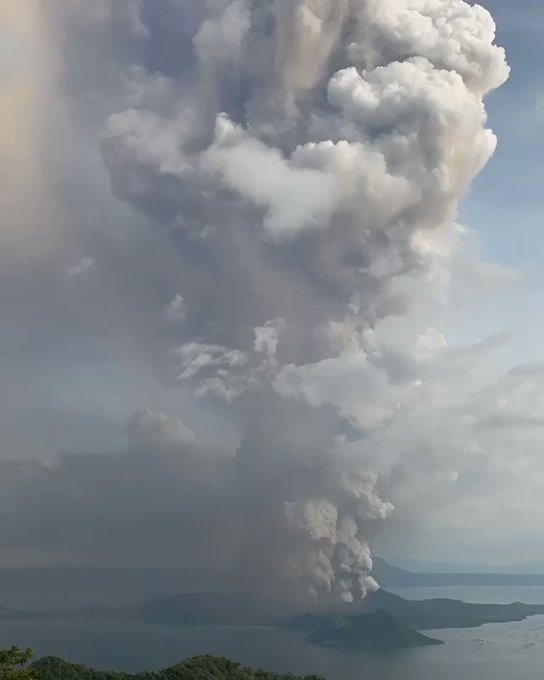 Within hours, the volcano shot a mile-high plume of ash and triggered multiple earthquakes.

Taal has had at least 35 reported eruptions since records began, most recently in 1977.

Mr. Dujarric said that OCHA and International Organization for Migration (IOM) teams were on the ground near the volcano.

The country of 105 million sits on the Pacific Ocean’s “ring of fire”, where seismic activity is frequent.

Although eruptions had eased by Wednesday, Taal remains on level four of a five-step alert level, signaling the possibility of a flare-up within hours or days that still threatens the lives of hundreds of thousands of people.

The earthquakes that followed the earlier eruption caused large fissures in the ground, demonstrating Taal’s intense energy and hinting at an imminent explosion, according to scientists.

In parts of Manila and surrounding provinces school has been suspended since Monday. And while emergency crews have restored some power and electricity, a large part of the region remains in the dark.

Before the coast guard began barring people from returning, some residents ventured back through thick mud to their destroyed homes to salvage what they could, according to news reports from the scene.