Training gender advisors and focal points in the Central African Republic (CAR) has earned a Brazilian United Nations peacekeeper a special gender advocate award, it was announced on Tuesday.

Secretary-General António Guterres will bestow naval officer, Lieutenant Commander Marcia Andrade Braga, with the UN Military Gender Advocate of the Year Award during the 2019 Peacekeeping Ministerial conference due to be held at UN Headquarters in New York this Friday.

“I am so proud to be selected”, she said, upon receiving news of her award, also expressing gratitude to her colleagues in the UN Stabilization Mission in the Central African Republic (MINUSCA). 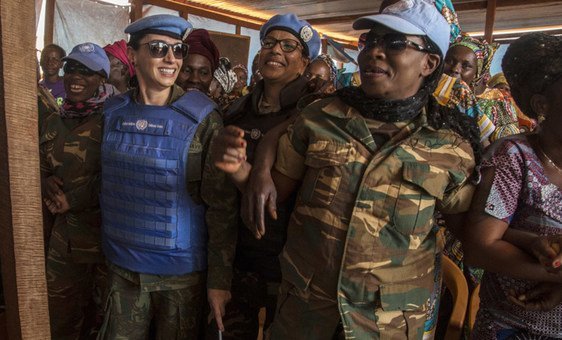 Serving as the Military Gender Advisor at MINUSCA Headquarters since April 2018, Lt. Cdr. Braga has helped to build a network of trained gender advisors and focal points among the Mission’s military units and promoted mixed teams of men and women to conduct community-based patrols around the country.

These “Engagement Teams” were able to gather critical information to help the Mission understand the unique protection needs of men, women, boys and girls, which in turn helped develop community projects to support vulnerable communities.

Projects include the installation of water pumps close to villages, solar-powered lighting and the development of community gardens to cut down the distances women have to travel, to tend their crops.

Lt. Cdr. Braga is also a driving force behind MINUSCA leadership’s engagement with local women leaders, making sure that the voice of Central African women is heard throughout the ongoing peace process.

Moreover, as a former teacher she has also helped train and raise awareness among her peers on gender dynamics within the Mission.

Jean-Pierre Lacroix, who heads the UN Department of Peace Operations, spelled out: “Marcia Andrade Braga is a stellar example of why we need more women in peacekeeping: Peacekeeping works effectively when women play meaningful roles and when women in the host communities are directly engaged”.

Created in 2016, the UN award recognizes the dedication and effort of an individual peacekeeper in promoting the principles of UN Security Resolution 1325 (UNSCR 1325) on women, peace and security, which underscores the “3 Ps”, to prevent conflict; protect women and their rights during and after conflict; and to increase the numbers of women participating in all mechanisms, to prevent and resolve conflict.