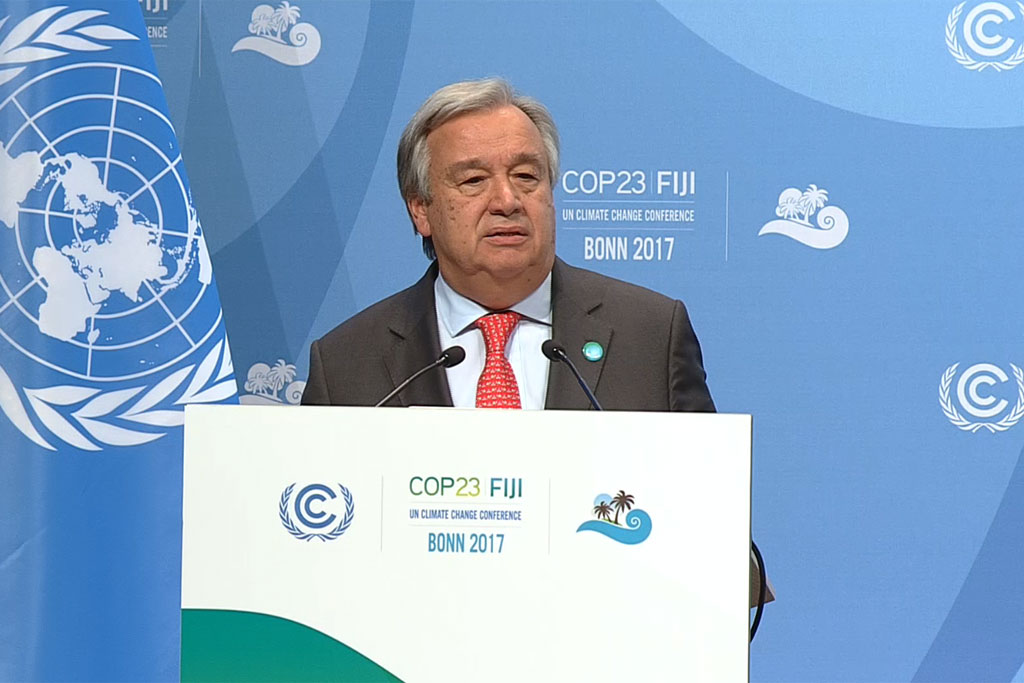 “Our duty – to each other and to future generations – is to raise ambition,” said Mr. Guterres at the opening of the high-level segment of COP23, which was also attended by Heads of State and Government, including President of Germany Frank-Walter Steinmeier, German Chancellor Angela Merkel, French President Emmanuel Macron, and Prime Minister of Fiji, Frank Bainimarana, who is also the President of COP23.

“We need to do more on five ambition action areas: emissions, adaptation, finance, partnerships and leadership,” the Secretary-General added.

The Bonn Conference, which opened on 6 November 2017, is taking place one year after the entry into force of the Paris Climate Agreement.

The Agreement, which was adopted by the 196 Parties to the United Nations Framework Convention on Climate Change (UNFCCC) in December 2015, calls on countries to combat climate change by limiting the rise of global temperature below 2 degrees Celsius and strive not to exceed 1.5 degrees Celsius. Today, 170 Parties have ratified the treaty.

Regarding emissions reductions, the UN chief urged countries “to use the 2020 revision of the Nationally Determined Contributions (NDCs) to close the 2030 emissions gap.”

He also stressed how essential climate mitigation is, calling for adaptation measures and strengthening resilience. The Green Climate Fund can play a catalytic role in this regard. He appealed to its members, especially donor nations, to reinvigorate engagement with that vital finance mechanism.

The world should adopt a simple rule: If big infrastructure projects aren’t green, they shouldn’t be given the green light. Otherwise we will be locked into bad choices for decades to comeUN chief Guterres

As greater ambition on emissions, adaptation and resilience “is inextricably linked to funding,” the Secretary-General stressed the need “to mobilize the agreed $100 billion annually for developing countries.”

“We must stop making bets on an unsustainable future that will place savings and societies at risk,” he added, stressing that “if we add the economic benefits of avoiding the devastation of climate change impacts, gross domestic product (GDP) in 2050 would soar by 5 per cent.”

“The world should adopt a simple rule: If big infrastructure projects aren’t green, they shouldn’t be given the green light. Otherwise we will be locked into bad choices for decades to come. Investing in climate-friendly development is where the smart money is needed,” Mr. Guterres said.

The Secretary-General stressed that more ambition required action coalitions across all key sectors and by all actors. “We must engage all actors – national, regional and local governments, philanthropists and investors and consumers – in the transformation to a low-emission economy,” he said.

As for political leadership, Mr. Guterres encouraged countries to be bold in their deliberations and decisions in Bonn and at home. “Show wisdom in investing in the opportunities of the future. Show compassion in caring what kind of world we build for our children,” he stated.

Also addressing the COP23 High-Level segment, the President of the UN General Assembly, Miroslav Lajčák, reminded participants that “the decisions we make today will affect not only us – but also those who come after.”

He added: “If we hand over a planet with an uncertain future, history will not forgive us.”

For his part, Mr. Guterres welcomed a series of summits and conferences on climate change which are scheduled ahead of the UN Climate Summit in September 2019, including the ‘One Planet summit’ to be convened by France next month and focusing on financing, a gathering in California, bringing together non-State actors, and the COP24 in Katowice, Poland, in December 2018.