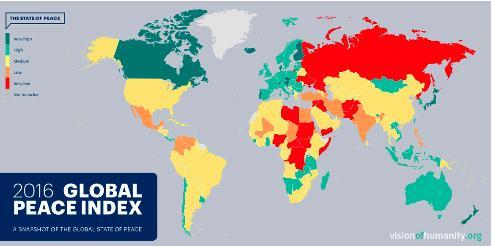 The 2016 GPI report provides a comprehensive update on the state of peace. It shows that amidst the global deterioration the world continues to spend enormous resources on creating and containing violence but very little on peace. The key to reversing the decline in peace is through building Positive Peace – a holistic framework of the key attitudes, institutions and structures which build peace in the long term. The UN’s Sustainable Development Goal 16, which focuses on peace, justice and strong institutions is critical to focusing the international community on the goal of attaining a more peaceful world. But measuring it and developing the data to know if countries are improving is a serious challenge that needs greater investment and levels of cooperation. The 2016 GPI report shows:

While the world became less peaceful in 2015, many countries also improved. In fact, slightly more countries improved, 81 – than deteriorated, 79.  As the size of the deteriorations was larger than the improvements, there was a decline in the global average. This shows the complex picture of global peace and underscores that while there has been an emergence of concerning negative trends, they are not uniform globally and positives can be drawn from the data.

The majority of the global deterioration is due to the developments in the Middle East and Africa (MENA), already the least peaceful region in the world.  So intense is the current concentration of violence and conflict in MENA that, when considered separately, the rest of the world’s average peace levels improved. Three of the five biggest country declines in peace occurred in the region: Yemen, Libya and Bahrain. 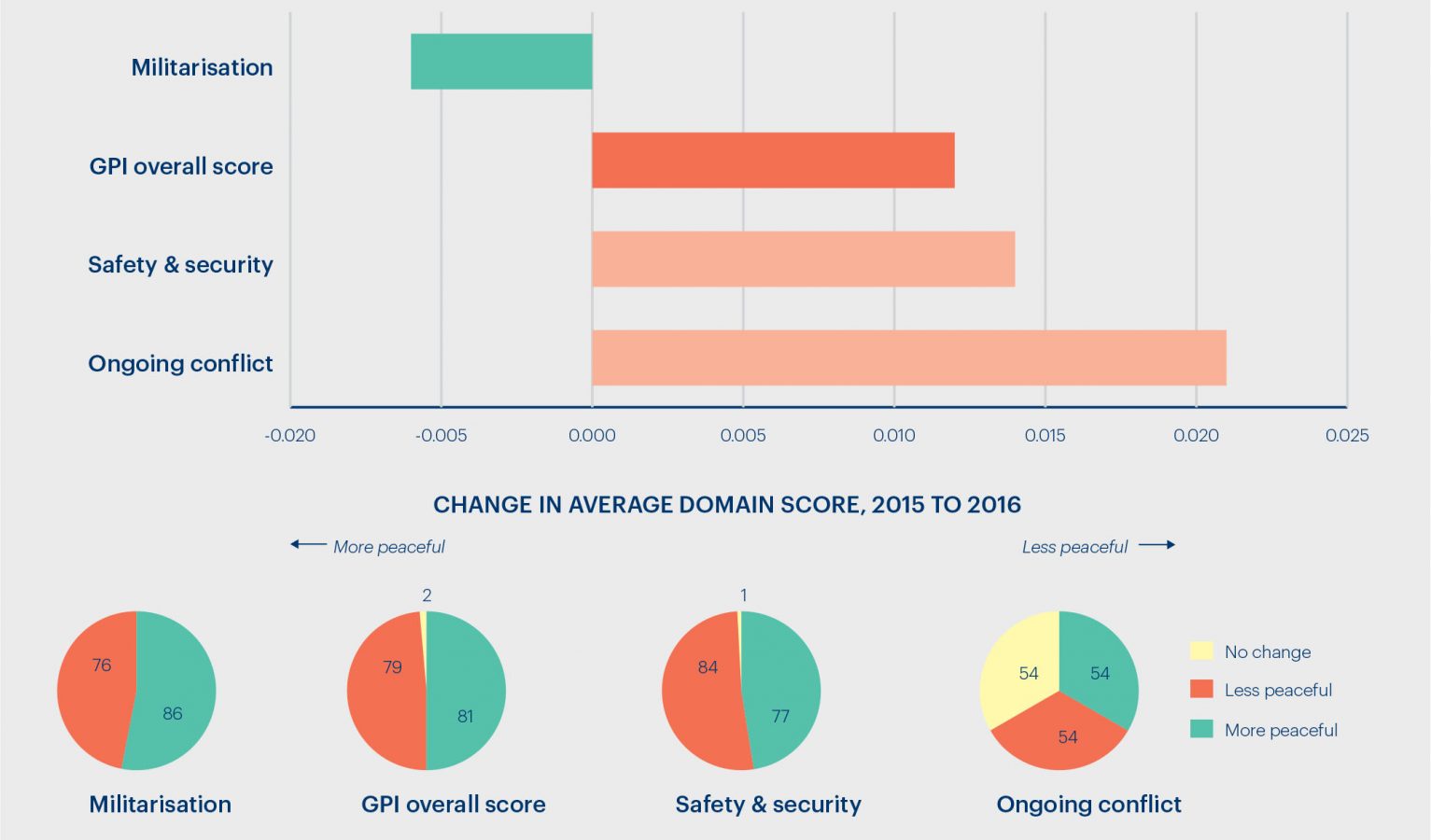 The indicators with the largest yearly deterioration were the impact of terrorism and political instability. Deaths from terrorism increased by 80 per cent from last year’s report with only 69 countries not recording a terrorist incident. The intensity of terrorism also increased with the number of countries suffering more than 500 deaths from terrorist acts more than doubling, up from 5 to 11. The rise in political instability was globally distributed with large changes within many countries spread across many regions. Among the countries with the largest deteriorations were Djibouti, Guinea-Bissau, Poland, Burundi, Kazakhstan and Brazil.

However, there were positives. The indicator with the largest improvement is UN peacekeeping funding. This underscores the increasing commitment of the international community to maintaining adequate funding for peacekeeping operations. The second largest improvement was recorded in the security officers and police rate indicator, with the number of countries that have high levels of police and internal security officers decreasing. These are promising developments that counter the fall in overall global peace.

The last decade has seen an historic decline in world peace. This interrupts the long term improvements that have taken place since the end of World War II.

The historic ten-year deterioration in peace has largely been driven by the intensifying conflicts in the MENA region. Terrorism is also at an all-time high, battle deaths from conflict are at a 25 year high, and the number of refugees and displaced people are at a level not seen in sixty years. Notably, the sources for these three dynamics are intertwined and driven by a small number of countries, demonstrating the global repercussions of breakdowns in peacefulness.

Over the past decade, the average country score deteriorated by 2.44 per cent with 77 countries improving while 85 countries deteriorated, highlighting the global complexities of peace and its uneven distribution.

The past decade has seen a continuation of longer term trends in peacefulness away from external conflicts between states and towards internal conflicts within states. Although it is too early to state whether the decrease in peacefulness represents a reversal of the ‘long peace’ that started at the end of World War II, there are a number of worrying signs that suggest conflict could escalate.

Terrorism at an all-time high

The terrorism impact indicator had the greatest overall deterioration, with all but two regions recording an increase over the past decade. While still accounting for a small percentage of the total number of violent deaths, terrorism has grown steadily over the past decade. The number of yearly incidents has almost tripled since 2011 and the number of deaths has increased to over 30,000.

The majority of terrorist activity is highly concentrated in five countries: Iraq, Nigeria, Afghanistan, Pakistan and Syria. Between them these countries accounted for 78 per cent of deaths from terrorism in 2014. However, there are signs that terrorism is becoming more common across the globe, with almost every region having an increase in its terrorism impact score from 2008 to 2016.