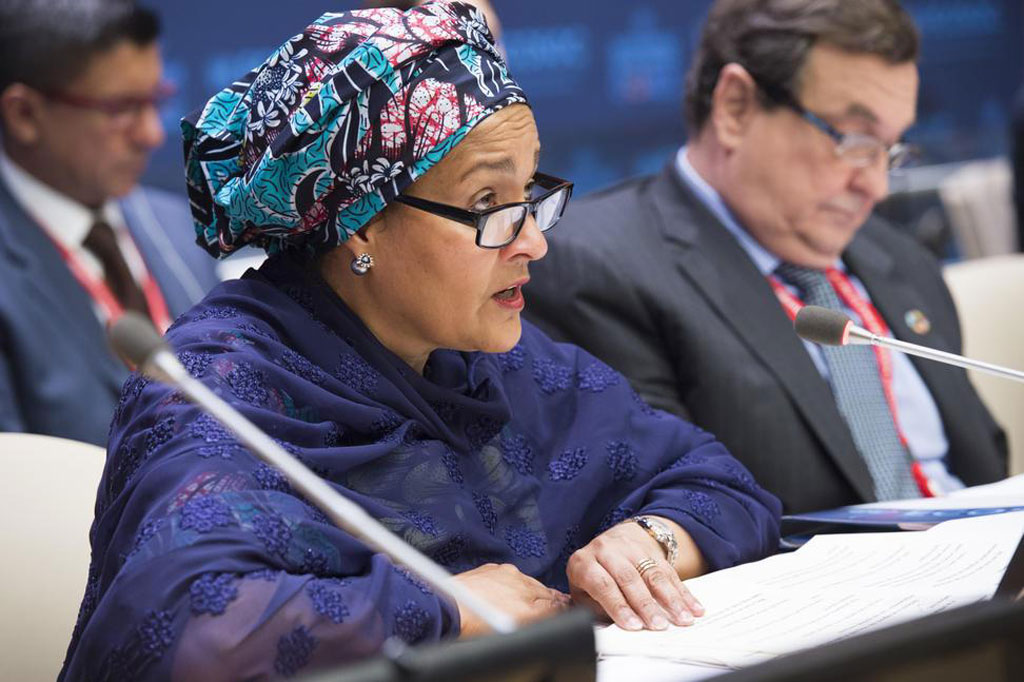 Delivering her first address as the United Nations Deputy Secretary-General, Amina Mohammed underlined that Sustainable Development Goals (SDGs) are essential for a safe and secure future that brings prosperity, opportunity and human rights for all.

“Around the world, success in achieving the SDGs will ease global anxieties, provide a better life for women and men and build a firm foundation for stability and peace in all societies, everywhere,” said Ms. Mohammed at the opening of the 2017 Economic and Social Council segment on Operational Activities for Development.

Ms. Mohammed, earlier today, was administered the oath of office by Secretary-General António Guterres at a ceremony at the UN Headquarters in New York.

“Success will require a bolder approach to financing and partnerships. Nothing will be achieved without engaging all actors,” she added, urging all countries to rethink systems, approaches, redefine traditional planning, delivery and monitoring.

She also said that the UN too needed to be “fit for purpose” to help its Member States implement 2030 Agenda for Sustainable Development.

“We must innovate, and revamp our approach to partnership and financing, with a focus on the long haul. We must empower youth to participate in and shape the political and economic lives of their countries and communities; to be the agents of peace and development,” she noted.

Further in her remarks, the deputy UN chief also highlighted that despite much progress, Africa continued to remain vulnerable, and therefore needs to be a UN priority.

Opening of the 2017 Economic and Social Council segment on Operational Activities for Development. UN Photo/Eskinder Debebe

Noting that efforts should be stepped to support the least developed, landlocked and small island developing states to reduce vulnerability and build resilience, she added that “It is critical that, across the world, we focus on those furthest behind first. Because in all regions, the rising tide of optimism and empowerment, has not yet reached everyone.”

She also underlined the need to address growing inequalities around the globe as well as combat gender discrimination which continues to limit the opportunities and potential of women and girls in all countries.

Looking ahead, Ms. Mohammed said that focus would be based on broadly three principles: strengthening impartial leadership of the UN development system for coherence and integration at all levels; addressing the trust deficit to entail accountability and transparency at all levels; and being responsive to national priorities.

“Solutions from the past will not, alone, meet the challenges of the future,” she underlined.

The UN Deputy Secretary-General also spoke of the Quadrennial Comprehensive Policy Review (QCPR) process that established a sequenced approach to the review of the UN development system as well as on the empowerment of Resident Coordinators and implementation of standard operating procedures for UN Country Teams.

Noting that the world has a unique, once-in-a-generation opportunity to deliver a better future for all humanity, she stressed: “The task ahead is challenging, but nothing is impossible when we work together.”

Opening the segment, ECOSOC Vice-President Cristián Barros said the Council would contribute to the implementation of the QCPR in three ways: by laying the foundation for its work after the receipt of comprehensive proposals requested from the Secretary-General in the QCPR; by discussing concrete steps that the UN development system can initiate immediately to enhance system-wide coherence and efficiency; by reflecting on adjustments needed to improve impact of support provided to different groups of countries to deliver on the 2030 Agenda.

As a result of the deliberations in the general Assembly on the QCPR, Mr. Barros said there is now growing recognition among Member States that the UN development system is at a “critical juncture” where important decisions will need to be made for the Organization to effectively support delivery of the 2030 Agenda.

This is why the new QCPR resolution of the General Assembly requested the Secretary-General to prepare proposals for their consideration in the course of this year on the system’s functions and capacities.

“These options will enable Member States to make decisions on the changes required at different levels for the kind of transformation we need to bring the UN development system up to speed with the level of ambition of the 2030 Agenda,” he said.