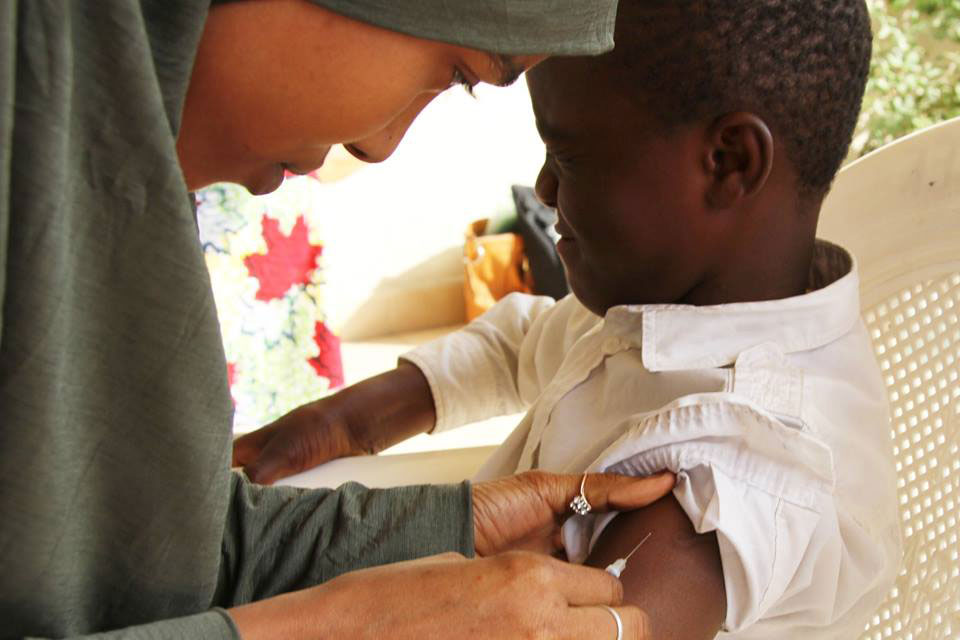 A child is vaccinated during a measles campaign targeting 4.7 million children in Adamawa, Borno and Yobe in northeast Nigeria. Photo: UNICEF Nigeria

26 January 2017 – A major vaccination campaign against a measles outbreak in northeast Nigeria is reaching 4.7 million children, according to the United Nations Children’s Fund (UNICEF).

“Security has improved in some areas so we have acted quickly to access places we could not previously reach and protect children from the spread of a very dangerous disease,” said Mohamed Fall, UNICEF Representative in Nigeria, in a news release.

The campaign, concluding this week, is covering the three states most affected by the Boko Haram conflict – Adamawa, Borno and Yobe – where insecurity has limited vaccination efforts. “We are still extremely concerned about children living in large areas of Borno state that are not yet accessible,” said Mr. Fall.

In 2016, there were approximately 25,000 cases of measles among children in Nigeria; 97 per cent of the cases were in children under the age of ten and at least a hundred children died.

Measles infections tend to increase during the first half of the year because of higher temperatures. Measles vaccination coverage across Nigeria remains low, with a little over 50 per cent of children reached, but in areas affected by conflict, children are particularly vulnerable.

The risks for malnourished children who have weakened immunity are further heightened.

The vaccination campaign, conducted in partnership with the Nigerian Government, the World Health Organization (WHO), and several non-governmental organizations, also includes a vitamin A supplement for children under five to boost their immunity, as well as de-worming tablets.

The emergency in northeast Nigeria remains acute with more than 1.6 million people displaced because of the conflict.

Of the $115 million called for in 2016, only $51 million was received. In 2017, UNICEF is seeking $150 million to respond to the urgent humanitarian needs in northeast Nigeria.