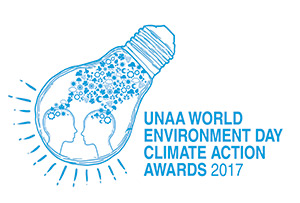 Winners of the 2017 UNAA World Environment Day Climate Action Awards were announced on Wednesday June 7, at the inaugural Climate Collaboration Forum in Melbourne.

In response to the United Nations 2015 Paris Climate Agreement, the UNAA is promoting the development of a national, inclusive climate management framework.

To coincide with World Environment Day 2017, the UNAA held the inaugural Climate Collaboration forum – a full day event designed to provide representatives from all climate stakeholders with an opportunity to:

◊◊ Have their leadership and innovation acknowledged through the presentation – over lunch – of the 2017 World Environment Day Awards which, in 2017, will all be linked to climate

The Awards were incorporated into the UNAA Climate Collaboration forum and included a new focus on climate management and action.  The awards will highlight work being done by organisations and individuals that will enable Australia to adapt most effectively to expected changes in climate; mitigate the effects of such climate change and help move Australia to net zero emissions by the second half of this century.