The response to Tuesday’s explosion in Beirut requires global support in order to “surmount the devastating impact” of the crisis facing the Lebanese people, the UN Deputy Special Coordinator for the country said on Thursday.

“With the emergence of new challenges due to the latest devastating event, UN in Lebanon and partners are mobilized to provide immediate humanitarian assistance to the Lebanese people in support of the government’s response to this tragedy”, she said.

Saying that she has been deeply moved by the peoples’ solidarity and spontaneous acts of kindness, she spelled out: “We are in this together, and we are committed to support Lebanon in this very difficult time”.

This will include expanding and establishing additional Intensive Care Units (ICUs) where needed, and provide trauma kits, ventilators, medical supplies and medicine.

Almost 80,000 children are among the 300,000 people displaced by the Beirut explosions, according to UN Children’s Fund (UNICEF) estimates, with affected families in desperate need of support.

While the number of child casualties is unclear, thousands of children’s lives have been turned upside down, with many traumatized and in shock.

“Over the past 24 hours, UNICEF continued to coordinate closely with authorities and partners on the ground to respond to the urgent needs of families affected, focusing on health, water and the wellbeing of children,” said Violet Speek-Warnery, UNICEF Deputy Representative in Lebanon.

According to the World Health Organization (WHO), the blast has rendered three hospitals inoperable.

At the same time, two other facilities sustained substantial damage, and the equivalent of 500 hospital beds have been lost.

UN Deputy Spokesperson Farhan Haq told journalists that in coordination with the Lebanese Ministry of Health, further assessments are underway to “identify available capacity, material needs and operational gaps in the health sector”.

As health organizations start to procure medical equipment and supplies, WHO is helping to cover 1,000 trauma and 1,000 surgical interventions for people suffering from burns and wounds caused by glass and other debris from the blast.

Meanwhile, according to the Office for the Coordination of Humanitarian Affairs (OCHA), medical facilities in Beirut remain inundated with trauma and burn victims, with many providing treatment on sidewalks and in carparks.

And many intensive care units were already near capacity with COVID-19 patients, and the nation’s outbreak worsens.

OCHA is deploying surge teams to assist with the emergency response, including experts from the UN Disaster Assessment and Coordination (UNDAC) team, and International Search and Rescue Advisory Group.

© UNOCHA/Farid Assad – The UN is working closely with the authorities in Lebanon to support ongoing response in the aftermath of the massive deadly explosion that rocked Beirut on Tuesday, destroying large swathes of the capital.

While Beirut International Airport remains open for passenger and cargo flights, the port of Beirut – where the explosion took place – is destroyed.

The port was the main lifeline of the country as both an economic hub and the main entry point for many essential medicines and supplies.

“With the Beirut Port inoperable, the UN and its partners are looking to adjust logistic networks to ensure sustained operations”, said Mr. Haq.

He flagged that humanitarian materials would likely be redirected through the Tripoli Port while flagging that because it has a lower capacity than the Beirut Port some supply chains may be adversely affected.

Meanwhile, the UN Interim Force in Lebanon (UNIFIL) reported that it continues to assess the damage to one of its Maritime Task Force ships, struck during the blast.

Mission leadership visited both the vessel at the Beirut Port as well as injured peacekeepers from Bangladesh recovering in hospitals, in the capital and in Saida.

“In the aftermath of the explosions, a total of 23 UNIFIL peacekeepers from Bangladesh had been admitted to hospitals, of whom 18 have been discharged. Two peacekeepers remain in critical but stable condition”, said the UN spokesperson.

The UN Mission continues to engage with and offer support to the authorities and people of Lebanon in dealing with the aftermath. 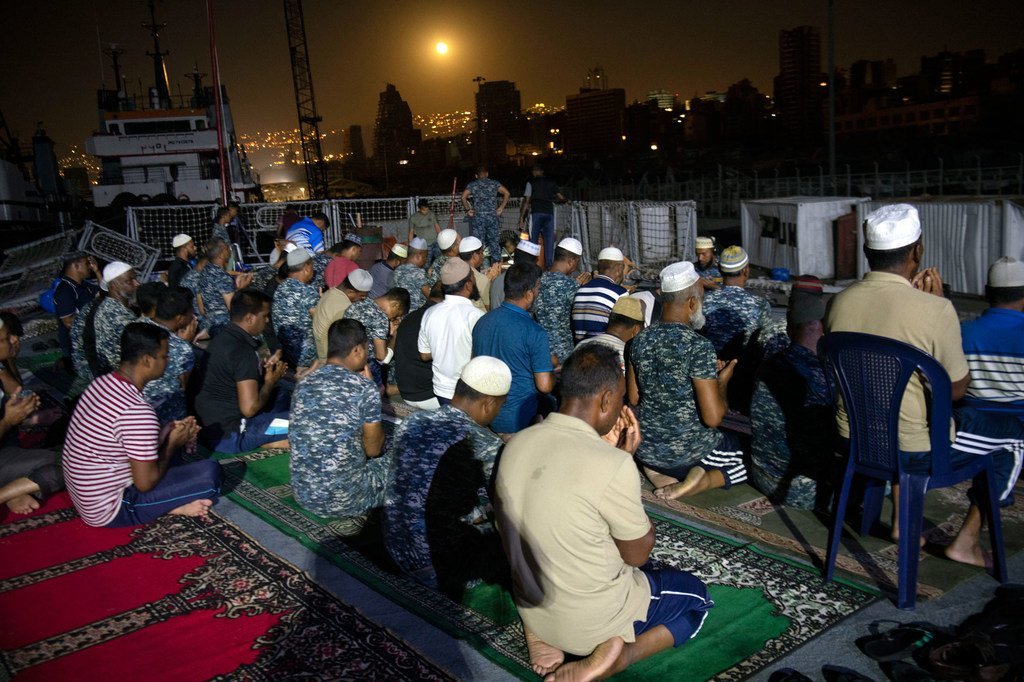 UN/Pasqual Gorriz – Evening prayers aboard UNIFIL’s Maritime Task Force corvette “BNS Bijoy” after assessing the damages it withstood during the devastating explosions in the Beirut Port.