© UNICEF/Helene Sandbu RyengOn 26 May 2020 in Juba, South Sudan, children released from armed forces are seated on the ground while negotiations for their reintegration take place.

Boys and girls used and abused in armed conflict have had their childhoods replaced by “pain, brutality and fear while the world watches”, the UN Special Representative of the Secretary-General for Children and Armed Conflict, said on Monday.

Launching the Secretary-General’s Annual Report on Children and Armed Conflict, Virginia Gamba maintained that parties to conflict often “neglect to protect children in the conduct of hostilities and deny them the vital aid they desperately need”.

The tragedy children face continued unabated throughout 2019, the report highlighted, disclosing that the UN had verified over 25,000 grave violations against children.ChildrenArmedConflict✔@childreninwar

The overall number of grave violations, which remains similar to 2018, translates into some 70 recorded abuses per day.

“By violating the rules of war, parties endanger their own children”, she spelled out.

Citing 4,400 verified incidents, the report revealed a shocking 400 per cent jump in the denial of humanitarian access to children last year, which Ms. Gamba called “by far most worrisome trend in 2019”.

It also painted a picture of frequent violence against humanitarian workers, along with aggressions to impede their work in providing basic assistance to children, such as looting supplies and restricting movements, among many other disruptions.

The document spotlighted Yemen, Mali, the Central African Republic (CAR), Syria, Israel and Palestine as the most worrying situations.

Disrespect shown to fundamental rights within schools and hospitals is also extremely concerning, particularly in in Afghanistan, Israel, Palestine and Syria where some 927 verified incidents of attacks were reported.

As a direct result of attacks, or closures for military use, millions of children during 2019 were deprived of both an education and effective healthcare.

“I call on all parties to conflict to immediately prioritize humanitarian access to children and vulnerable populations in situations of armed conflict, and to allow child protection experts and humanitarians to do their work”, said the Special Representative.

Throughout 2019, boys and girls continued to endure sexual violence and although 735 cases had been verified, according to the brief, these violations are vastly underreported.

Factors, such as impunity for perpetrators, and lack of access to justice; fear of stigma and lack of services for survivors; are largely the cause of under-reporting.

The largest verified incidents are occurring in the Democratic Republic of the Congo (DRC), Somalia and CAR.

“I commend the courage and dedication of these humanitarian professionals and call on all Member States to support the work of child protection actors in the field”, said Ms. Gamba.

The cross-border nature of conflict is also greatly disturbing, including in the Sahel and Lake Chad Basin regions.

To address the plight and vulnerability of girls and boys in Burkina Faso – where terrorist-related and inter-communal violence is rising fast – and Cameroon, the Secretary-General will include both, for the first time, as situations of concern in his upcoming report.

The Special Representative expressed the readiness of her office in continuing to support children throughout the regions.

Another cause for alarm is that 2,500 children are detained for their actual or alleged association with armed groups, including possible associations with those designated by the UN as terrorists.

The Special Representative reminded that children must be treated primarily as victims; that detention is used only for the shortest period and as a measure of last resort; and that alternatives to incarceration are actively sought. 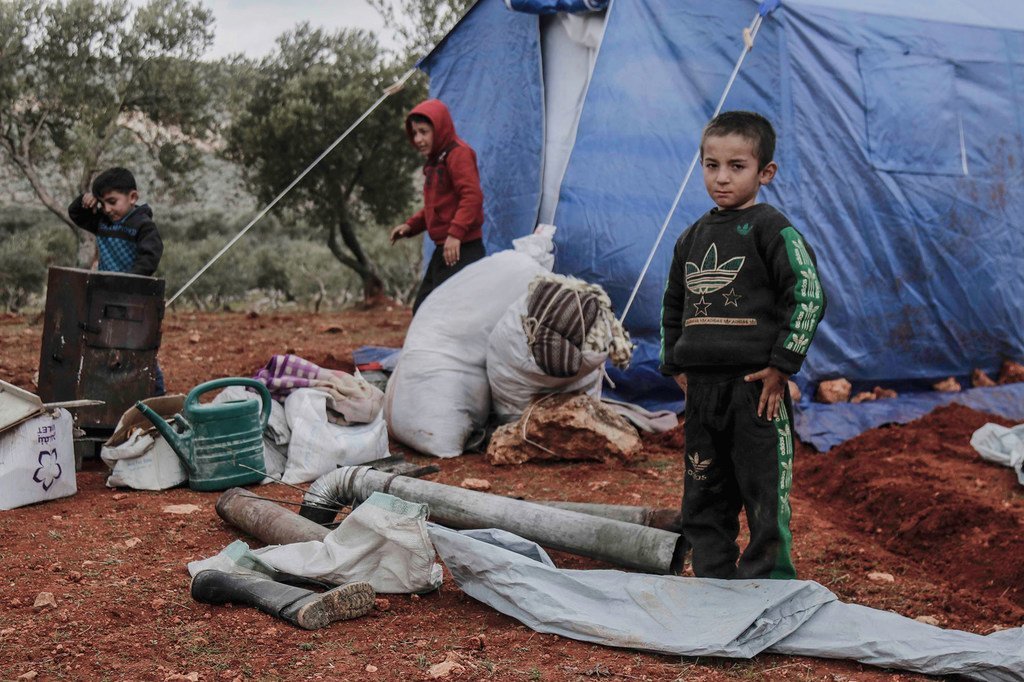 UNOCHA Children play outside a tent in a camp for displaced people in Idlib, Syria.