UN Photo/Milton Grant
The UN Secretary-General Javier Perez de Cuellar visits Katatura, a black township of Windhoek, Namibia in July 1989. Javier Pérez  de Cuéllar, the fifth United Nations Secretary-General, praised for his ability to foster dialogue and for leading the Organization through a turbulent decade, has passed away at the age of 100.

A veteran Peruvian diplomat, lawyer and professor, he is the first and only Latin American to hold the top UN job so far.

In a statement Wednesday evening, current UN Secretary-General António Guterres said that he was profoundly saddened at Mr. Pérez de Cuéllar’s passing and praised the former UN chief as “an accomplished statesman, a committed diplomat and a personal inspiration who left a profound impact on the United Nations and our world.”

Born in Lima, Peru, on 19 January 1920, he was appointed to lead the UN after 42 years of diplomatic service.

“Mr. Pérez de Cuéllar’s life spanned not only a century but also the entire history of the United Nations, dating back to his participation in the first meeting of the General Assembly in 1946,” said Mr. Guterres.

Over the course of his career, in addition to being his country’s Ambassador to Switzerland – as well as the then Soviet Union, Poland and Venezuela – Mr. Pérez de Cuéllar held many high level positions in Peru’s Ministry of Foreign Affairs, including Permanent Representative to the United Nations in 1971.

During his month presiding over the UN Security Council, in July 1974, he ably-managed the crisis in Cyprus. A year later, he was appointed as the Secretary-General’s Special Representative in Cyprus for two years, then went on to become the UN chief of Political Affairs and Representative of the UN in Afghanistan.

The Cold War period and the growing role of the UN

Mr. Guterres said that his predecessor’s tenure as Secretary-General coincided with two distinct eras in international affairs: first, some of the iciest years of the Cold War, and then, with the ideological confrontation at an end, a time when the UN began to play more fully the role envisaged by the founders.

In 1982, his tenure as UN chief started with intense negotiations between the United Kingdom and Argentina over the disputed sovereignty of the Falkland Islands/Malvinas. Persistent through the countless challenges, Mr. Pérez de Cuéllar  produced a now famous phrase, referring to the peace talks: “The patient is in intensive care but still alive.”

Despite health issues, he agreed to serve for a second term as UN chief. In his acceptance speech in 1986, he referenced the financial crisis that the UN was going through at the time, saying that “to decline in such circumstances would have been tantamount to abandoning a moral duty toward the United Nations.”

Reiterating his “unshakable faith” in the “permanent validity” of the Organization, he added that the UN’s “difficult situation” provided a “creative opportunity for renewal and reform.”

“Mr. Pérez de Cuéllar played a crucial role in a number of diplomatic successes — including the independence of Namibia, an end to the Iran-Iraq War, the release of American hostages held in Lebanon, the peace accord in Cambodia and, in his very last days in office, a historic peace agreement in El Salvador,” said the current UN chief.

His second term was also marked by the withdrawal of Soviet troops from Afghanistan. Among others, his team facilitated political stability in Nicaragua .

Long after his term as Secretary-General ended in 1991, he remained true to the values of the UN, and continued advocating for peace, justice, human rights and human dignity throughout his life. Decorated by some 25 countries, he was also the recipient of several honorary degrees.

In his speech to the Nobel Committee, which awarded the Nobel Peace Prize to UN Peacekeeping Operations in 1989, he defined the role of inter-governmental organizations like the United Nations as being to “draw the line between struggle and conflict.” Thanks to his unyielding determination, he helped many nations “stay on the right side of that line”.

“I extend my deepest condolences to Mr. Pérez de Cuéllar’s family, the Peruvian people and so many others around the world whose lives were touched by a remarkable and compassionate global leader who left our world a far better place,” said Mr. Guterres. 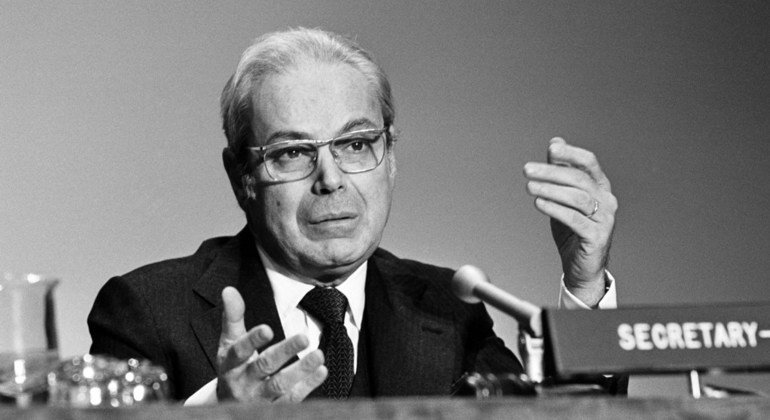