A shortage of protective equipment is endangering health workers worldwide, warned the World Health Organization (WHO) on Monday, citing “severe and mounting disruption to the global supply” caused by “rising demand, panic buying, hoarding and misuse”.

Speaking to the media in Geneva, WHO chief Tedros Adhanon Ghebreyesus said that “we can’t stop COVID-19 without protecting our health workers”. He warned that shortages of supplies such as gloves, medical masks, respirators, and aprons, are leaving doctors, nurses and other frontline healthcare workers “dangerously ill-equipped” to give proper care to patients.

In order to meet global demand for protective gear, the WHO is calling on industry and governments to significantly boost manufacture by some 40 per cent. In addition, says Tedros, secure supply chains are needed, export restrictions must be eased, and measures to stop speculation and hoarding need to be put in place.

The agency calculates that some 89 million medical masks, 76 million examination gloves and 1.6 million goggles will be needed for the COVID-19 response every month while the epidemic lasts. WHO has supplied around half a million sets of protective equipment to 47 affected countries, but these supplies are rapidly running out.

Prices have surged since the COVID-19 outbreak: the cost of surgical masks has risen some 600 per cent, and the price of gowns has doubled. Supplies can take months to deliver, says WHO, and market manipulation is widespread, with new stocks of equipment frequently going to the highest bidder. 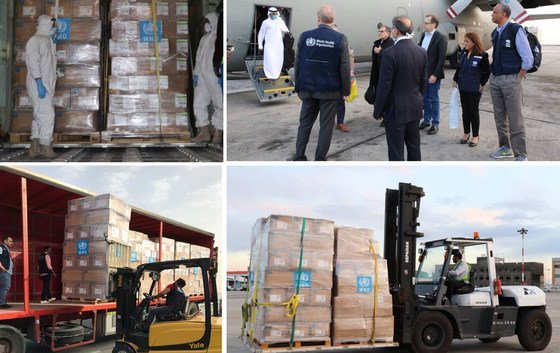 The World Health Organization has dispatched medical teams and supplies to Iran to help fight the outbreak of the coronavirus. , by WHO

Updating the press on the latest cases figures, Tedros shared the news that, over the latest 24-hour reporting period, China has confirmed 129 new cases. The smallest increase since January 20.

Outside China, 1,848 new cases were reported, across 48 countries, but 80 per cent of those are from just three countries: the Republic of Korea, the Islamic Republic of Iran and Italy.

12 new countries reported their first cases, and Tedros declared that the actions these newly-affected countries take will be “the difference between a handful of cases and a larger cluster.”

Responding to the increase of COVID-19 related deaths in the Eastern Mediterranean region, in particular the 66 deaths reported in Iran, Ahmed Al-Mandhari, WHO regional chief described the situation as “deeply alarming”.

Mr. Al-Mandhari said that the region has the required expertise, capacities and tools to contain the outbreak, but “the window of opportunity is closing, and we need to move fast.

WHO, he added, is working to minimize the risk of the virus entering countries, particularly those with weaker health systems. Areas with high-risk factors, such as camps and cities hosting mass gatherings, are of key concern. “Countries in the Region need to work together, share detailed and timely information, and show solidarity to those affected by the outbreak”, he said.

A digitally-enhanced microscopic image shows a coronavirus infection in blue of the first case discovered in the United States. , by CDC/Hannah A Bullock/Azaibi Tami

‘We are understanding this virus more and more’

Tedros acknowledged the fear that many people are experiencing, describing it as a natural response to a threat that we don’t fully comprehend, but he explained that, as WHO gathers more data, the agency’s understanding of the disease is improving.

There are important differences, he said, between the common flu virus and COVID-19, although both cause respiratory disease and spread the same way, via small droplets of fluid from the nose and mouth of someone who is sick.

However, COVID-19 does not transmit as efficiently as flu, according to the data received so far: people infected by COVID-19 (who are not yet sick) are not major drivers of transmission.

Only one per cent of reported cases in China are asymptomatic (i.e. they have the disease, but do not show symptoms), and most of those cases develop symptoms within two days.

The other major difference between COVID-19 and seasonal flu is that COVID-19 causes more severe disease. Also, because it is a new virus, no one has built up immunity, which means that more people are susceptible, and some will suffer severe disease.

Around 3.4 per cent of reported COVID-19 cases have died: by comparison, seasonal flu generally kills far fewer than 1% of those infected.

Whilst no vaccines or specific treatment are currently available, Tedros noted that more than 20 vaccines are currently in development, and clinical trials are ongoing. Unlike seasonal flu, containment, added the WHO chief, is still possible for COVID-19, which is why everything must be done to contain the spread of the virus.

Whilst several organizations around the world have announced the cancellation, or scaling down, of events involving gatherings of large numbers of people, the International Olympic Committee (IOC) has expressed its “full commitment to the success of the Olympics Games Tokyo 2020”, in a statement released on Tuesday.

After hearing a report into COVID-19, the IOC’s executive board said that it is encouraging all athletes to continue preparing for the games, which are scheduled to take place from July 24 to August 9.

A joint task force has been set up, involving the IOC, the Tokyo organizing team, the Japanese Government and the WHO; and international, national and regional sporting bodies are collaborating closely with regards to the preparation of the games, and addressing the challenges associated with coronavirus.