UN agencies together with the Bangladesh authorities have appealed for $877 million to support hundreds of thousands of Rohingya refugees from Myanmar, where conditions are still not conducive for their safe return, UN refugee agency chief Filippo Grandi said on Tuesday.

Speaking on the sidelines of the 2020 Joint Response Plan (JRP) launch for 855,000 ethnic Rohingya, and the more than 444,000 vulnerable Bangladeshis in host communities, Mr. Grandi urged Myanmar to take quicker action to help the displaced to return home.“The solution continues to be in #Myanmar. The problem is that things that need to be done there, to create conditions for refugees to return from Bangladesh into Myanmar, are too slow or not happening yet.” @Refugees chief @FilippoGrandi launches a new appeal for the #Rohingya. 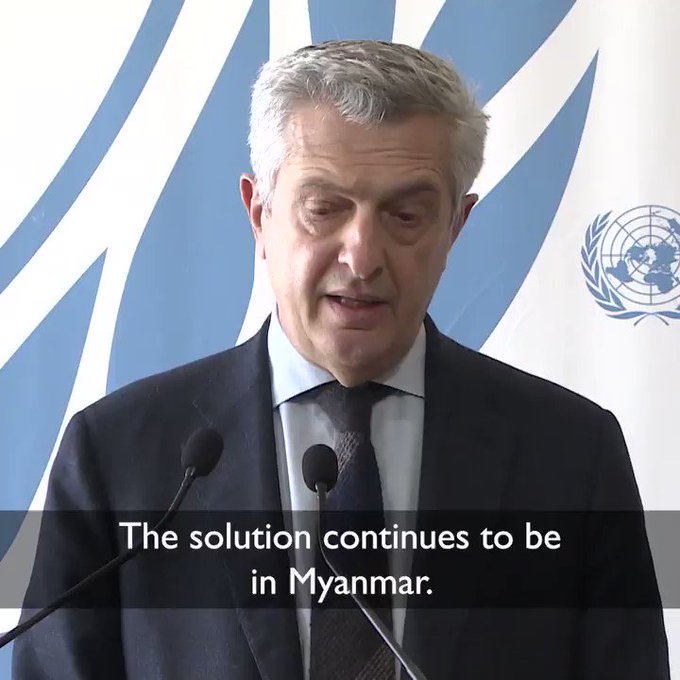 “The solution continues to be in Myanmar”, said the High Commissioner for Refugees (UNHCR). “The problem is that things that need to be done there, to create conditions for refugees to return from Bangladesh into Myanmar, are too slow or not happening yet.”

In August 2017, a military operation in Myanmar’s Rakhine state in response to separatist violence prompted hundreds of thousands of ethnic Rohingya to flee.

At the time, then High Commissioner for Human Rights, Zeid Ra’ad Al Hussein, likened the episode to a “textbook example of ethnic cleansing”.

Reporting to the Human Rights Council, he also cited reports of Myanmar authorities laying landmines along the border with Bangladesh and requiring returnees to provide “proof of nationality” – an impossibility, given that successive Myanmar governments have, since 1962, progressively stripped the Rohingya population of their political and civil rights, including citizenship rights.

At the current Human Rights Council session in Geneva, Zeid’s successor, Michelle Bachelet, noted that for over half a century, the policies of Myanmar had discriminated against religious and ethnic minorities.

Addressing Member States last week, she also said that the Government of Myanmar now had an historic opportunity to counteract systematic violations “by bringing its people together, as one”.

Listing the specific requirements of returning Rohingya refugees, Mr Grandi explained that they needed “freedom of movement, return of internally displaced people that are in camps in Rakhine state, respect of housing, land, property”.

They also needed “clarity on the pathway to citizenship that various commissions have indicated as being the fundamental step that needs to be taken”, the High Commissioner for Refugees insisted, in reference to recommendations by UN-appointed panels of experts.

Standing alongside the head of the UN migration agency (IOM) António Vitorino, Mr Grandi added: “There needs to be clarity in the minds of the refugees of what that means, in order for them not to be discriminated and to get eventually full integration in their own country, in their own society.”

In the months and years that followed the exodus from Rakhine state, Bangladesh has continued to host Rohingya refugees in a series of refugee camps in the south-east of the country, in an area known as Cox’s Bazar, along with host communities.

Highlighting the need for continued international assistance for Bangladesh, Shahriar Alam from the Bangladesh Ministry of Foreign Affairs noted that in the first 17 days alone after the exodus began, almost half a million Rohingya crossed into Bangladesh.

“We expect the UN Member countries to do more and work with me and do everything possible to put pressure on Myanmar to take their citizenship back…repatriation that is safe, voluntary and dignified,” he said.

Appeal provides for host communities too

According to UNHCR, IOM and the Bangladesh authorities, the 2020 appeal places stronger emphasis on supporting host communities that have taken in Rohingya refugees and fostering their well-being.

They need help with public service infrastructure – in particular, to reduce the impact of seasonal monsoon flooding – and access to sustainable livelihoods, along with initiatives to rehabilitate the environment linked to sustainable energy initiatives.

All Rohingya refugee households now use Liquefied Petroleum Gas (LPG) for cooking, which has led to a staggering 80 per cent drop in demand for firewood, the UN agencies said in a statement.

Some 30,000 local Bangladeshi families are also included in the initiative.

The introduction of LPG, together with reforestation measures, has resulted in a remarkable “re-greening” of the areas in Cox’s Bazar District where the Rohingya refugees are living, the appeal organisers maintained.

The appeal’s other objectives include strengthening protection for refugee women, men, girls and boys; delivering life-saving assistance to those in need and working towards sustainable solutions in Myanmar in line with the internationally agreed Sustainable Development Goals agenda.

Latest UN data shows that the 2019 Joint Response Plan was just over 70 per cent funded, meaning that donors provided $650 million against the $921 million requested.