Many parts of the world can expect above average temperatures in the coming months even without the presence of an El Niño event to drive warming, the World Meteorological Organization (WMO) said on Monday.

The UN agency published its latest update on El Niño/Southern Oscillation (ENSO), a naturally occurring phenomenon in the equatorial Pacific linked to heavy rains, floods, drought and other hazards.

El Niño occurs due to fluctuations in the temperature of the ocean and atmosphere. While it has a warming influence on global temperatures, its opposite, known as La Niña, has the reverse 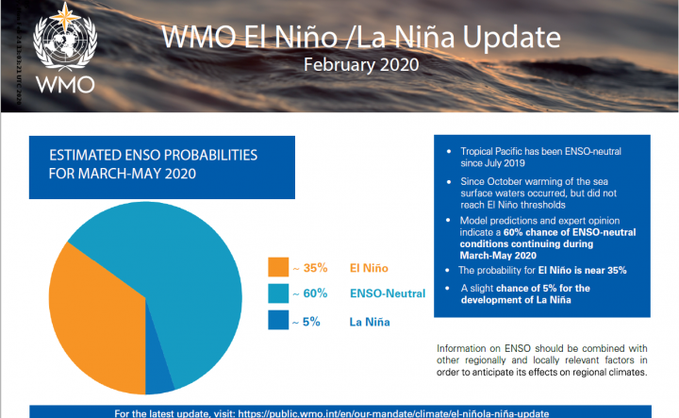 WMO reported a 60 per cent chance of ongoing ENSO-neutral conditions through May, with prospects for an El Niño or La Niña at 35 per cent and five per cent, respectively.

“Even ENSO neutral months are warmer than in the past, as air and sea surface temperatures and ocean heat have increased due to climate change. With more than 90% of the energy trapped by greenhouse gases going into the ocean, ocean heat content is at record levels”, said WMO Secretary-General, Petteri Taalas.

“Thus, 2016 was the warmest year on record as a result of a combination of a strong El Niño and human-induced global warming. 2019 was the second warmest year on record, even though there was no strong El Niño. We just had the warmest January on record. The signal from human-induced climate change is now as powerful as that from a major natural force of nature”, the weather agency chief added.

WMO explained that El Niño and La Niña are not the only naturally occurring phenomena that drive global climate patterns.

Others include the Indian Ocean Dipole (IOD), which has had a strong positive phase since last July but is now neutral.

The “Indian El Niño”, as it also is known, was linked to drought that contributed to bush fires in Australia as well as above average rainfall in Eastern Africa, which is a major factor behind the current desert locust infestation devastating the region.