© UNICEF/Baker Kasem
A child walks in the falling snow at a recently established informal settlement which continues to receive newly displaced families from southern Idlib and rural Aleppo governorates in northwest Syria. Facing freezing temperatures and bombing, more than 900,000 civilians in Syria’s north-west have been forced into ever smaller areas in search of safety, the UN’s top human rights official said on Tuesday.

“No shelter is now safe,” Michelle Bachelet’s spokesperson, Rupert Colville, said. “As the Government offensive continues and people are forced into smaller and smaller pockets, she fears even more people will be killed.”

“No shelter is now safe” – @UNHumanRights

“Out of nearly 550 health facilities in Syria’s north-west, roughly half are operational” – @WHO #Syria #Aleppo #Idleb 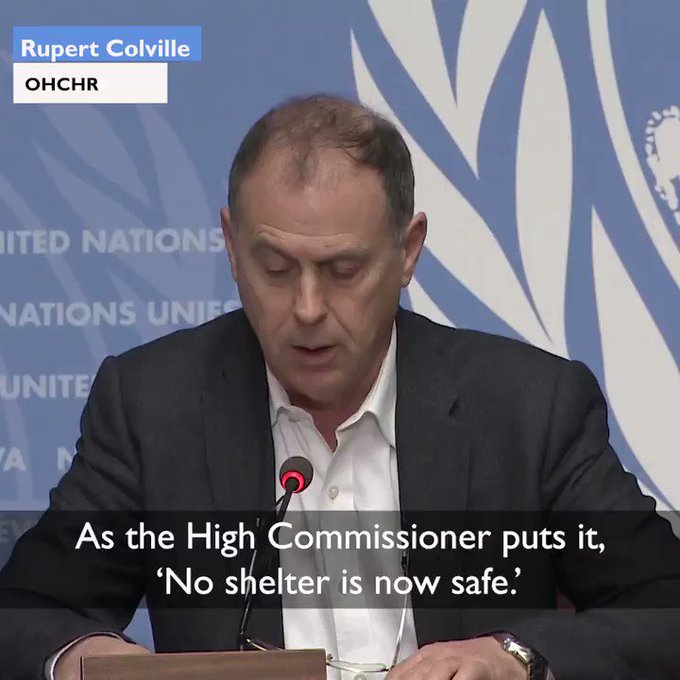 Since 1 January, the Office of the High Commissioner for Human Rights (OHCHR) has confirmed 299 civilian deaths in Idlib, as the Syrian Government continues its major military offensive to retake the last opposition-held area of the country.

“Around 93 per cent of those deaths were caused by the Syrian Government and its allies,” Mr. Colville explained. The remaining seven per cent of fatalities were attributable to non-State armed groups.

More than 80 per cent of the deaths attributable to Government forces and their allies – 246 out of 299 – came after airstrikes, the OHCHR spokesperson added.

In a statement, the High Commissioner expressed her “horror” at the scale of the crisis.

It was “cruel beyond belief” that mostly women and children sheltering under plastic sheeting were being hit, she said, noting that those fleeing the fighting have been “squeezed” into areas that were shrinking by the hour.

“They simply no longer have anywhere to go,” she added.

Asked whether the attacks on civilians and medical facilities contravened international norms, Mr. Colville highlighted their “sheer quantity” in the near nine-year conflict.

Other UN-appointed institutions had the means to investigate these attacks and ensure justice for victims, he noted, such as the Independent Commission of Inquiry on Syria – which was set up by and reports regularly to the Human Rights Council – and the International, Impartial and Independent Mechanism, established by the UN General Assembly in December 2016.

“The sheer quantity of attacks on these hospitals, medical facilities, schools, would suggest they can’t all be accidental,” Mr. Colville said. “At a minimum, even if they were accidental, it shows lack of proportionality, necessity, precaution and so on, all of which can contribute to something being attributed as a war crime.”

UNOCHA
Children play in a camp for displaced people in southern Idlib, Syria.

Amid the Syrian Government’s offensive in north-west Syria – the last bastion of opposition non-state armed groups – UN Children’s Fund (UNICEF) warned that of the four million people living in the north-west, just over two million of them are children.

“Virtually every child, up to 1.8 million of them, require humanitarian assistance,” spokesperson Marixie Mercado said.

She added that of the more than 900,000 people forced to flee the escalating violence, “over half a million children – 525,000 and climbing – have been forcibly displaced in north-west Syria since 1 December. At least 77 children were killed or injured in January alone. The breakdown is 28 children killed, and 49 children injured.”

In line with UNICEF Executive Director Henrietta Fore’s assessment that the situation in north-west Syria has become “untenable”, Ms. Mercado reiterated the agency’s call for an end to the violence.

“We ask for an immediate cessation of hostilities and an end to the war in Syria for once and for all, and we ask for all humanitarian workers to be able to respond to the massive needs in compliance with international humanitarian law,” she said.