UNAMA/Eric Kanalstein
In Afghanistan, despite favourable growing conditions for crops, many people are not getting enough to eat.

Over the last three months (August to October 2019), around one-third of the Afghan population required urgent humanitarian action, according to the latest Integrated Food Security Phase Classification (IPC) Alert, released on Monday, which declares that some 10.23 million people are living in a state of “severe acute food insecurity”.

The IPC, a coalition of UN agencies and other partners, classifies food insecurity in five distinct phases, from phase 1 (Minimal/ None), to phase 5 (Catastrophic/Famine): around 2.44 million Afghan are believed to be in an Emergency situation (phase 4), and 7.79 million in a Crisis situation (phase 3).

The IPC, which is monitoring a number of key food security indicators in Afghanistan, estimates that the situation is likely to get worse heading into next year, with the numbers of those experiencing severe acute food insecurity set to rise to 11.29 million (with 2.7 million in an Emergency situation, and 8.6 million in a Crisis situation), between November 2019 and March 2020.

A lack of opportunity in the labour market could, says the report, impact the livelihoods of vulnerable groups; as could the uncertain political climate and security situation, with upcoming elections affecting the outlook; food prices, which could rise in the Winter months; and extreme weather events, such as droughts and floods.
Focus on cash or ‘in kind’ assistance, and climate adaptation 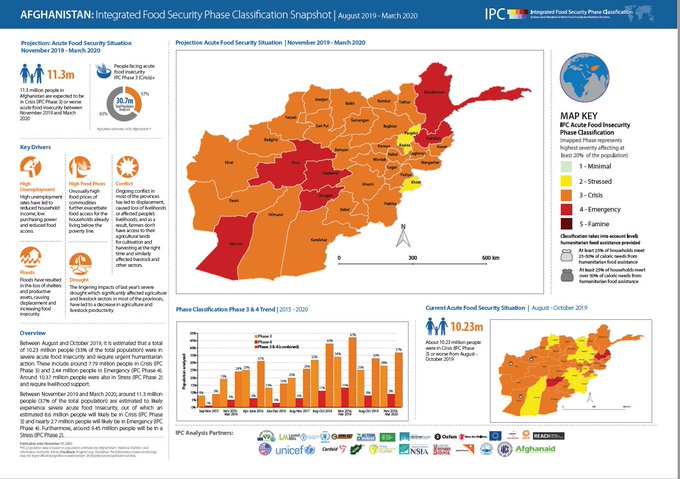 The November Alert from the IPC includes several recommendations to alleviate the food insecurity problems faced by the population. Providing humanitarian food assistance, in cash or kind, is one such proposal, as well as helping farmers to obtain quality seeds for the forthcoming season (most farmers do not have the capability to obtain seeds from any source).

The IPC urges partners to bear in mind the complex context of Afghanistan’s ethnic make-up, rugged terrain and “unrelenting civil unrest”, which should be considered when developing strategies for improving food security and livelihoods.

The report also calls for the impact of the changing climate to be addressed, with attention focused on programs that build resilience to disasters, and the reduction of disaster risks. Water irrigation systems should, in addition, be improved and strengthened.

The IPC brings together the Food and Agriculture Organization (FAO), the World Food Programme (WFP) and the UN Children’s Fund (UNICEF), as well as several NGOs and inter-governmental organizations, to produce internationally-recognized scientific assessments of food insecurity and malnutrition levels in countries.