Over half of the world’s population now live in cities, with numbers expected to double by 2050, but while urbanization poses serious challenges, cities can also be powerhouses for sustainable development; something the UN is spotlighting on World Cities Day, marked 31 October.

The UN Educational, Scientific and Cultural Organisation (UNESCO) will host a celebration at its Paris Headquarters on Thursday, convening representatives from all corners of the world for discussions on how cities can combat the climate crisis, create more inclusive urban spaces, and contribute to technical innovation. 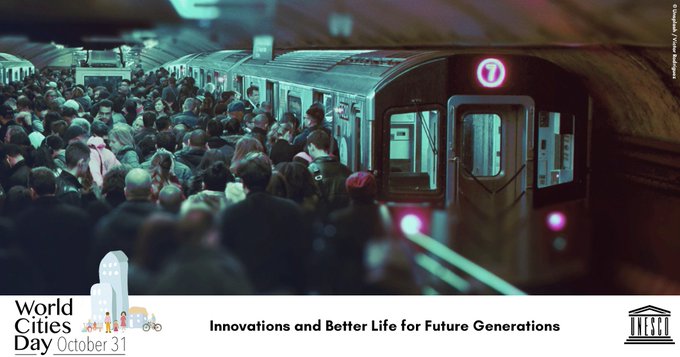 Cities provide a wealth of opportunities, jobs included, and generate over 80 per cent of gross national product across the globe, according to UN estimates. Urban areas also account for between 60 and 80 per cent of all energy consumption, despite only occupying three per cent of the planet’s surface and are responsible for three quarters of all greenhouse gas emissions.

In addressing these pros and cons, the Organisation has advocated for a “people-centred” development model, and aims to “re-humanise cities” in the face of trends impacting them, from population growth, demographic shifts, and increasing the risk of disasters induced by climate change.

This year’s theme: “Changing the world: innovations and better life for future generations” spotlights the role of technology and young people in building sustainable cities. To do so, Thursday’s commemorative event will be organized along four key discussion themes: ‘Cities 4 Sustainable Development Goals (SDGs)’, ‘Cities 4 Climate Action’, ‘Cities 4 Communities’, and ‘Cities 4 the Future’.

In line with its multidisciplinary mandate, UNESCO’s 2004 Creative Cities Network continues to harness the various ways cities spanning the globe are placing creativity and cultural industries at the heart of their development plans.

From gastronomy in Tucson, Arizona, to design in Nagoya, Japan, the network engages more than 246 cities, which integrate creative approaches in their development plans, 66 of which UNESCO announced as newcomers on the World Day. See the complete list of cities, and their creative undertakings here.

For World Cities Day this year, UNESCO is partnering with the UN”s Food and Agriculture Organisation (FAO), UN-Habitat, and refugee agency (UNHCR) to amplify the concerted action of the United Nations for cities alongside their planners and other urban players.

The UN’s Human Settlement Programme (UN-Habitat), co-hosted a commemorative event: “Better City, Better Life-Cultural Diversity and Innovation for Sustainable Communities” at UN Headquarters in New York on Thursday.  In a video message on the Day, the agency’s Executive Director, Maimunah Mohd Sharif said “fresh new ideas can transform the ways we live, and innovation can be simple indigenous ideas, or complex frontier technology…World City Days is a chance for us to reflect on ways to make cities more sustainable. It will help the planet improve our lives now and preserve the planet for generations to come.”

The UN-proclaimed World Day serves as a call for States, municipalities and city dwellers to work together for transformative change and sustainable strategies for cities, as urbanization continues to swell.

Secretary-General António Guterres explained in a statement attributable to his spokesperson,  that “the choices that will be made on urban infrastructure in the coming decades…will have decisive influence on the emissions curve. Indeed, cities are where the climate battle will largely be won or lost.”

From electric public transport to renewable and energy and better waste management systems, cities are “hubs of innovation and creativity, and young people are taking the lead.”

In addition, he highlighted that World Cities Day comes as “urban October” concludes, a month dedicated to raising awareness of urban challenges, and successes in sustainability.

“Let us commit to embracing innovation to ensure a better life for future generations and chart a path towards sustainable, inclusive urban development that benefits all”, he encouraged.