Money earned by the Myanmar military from international and domestic business deals, “substantially enhances its ability to carry out gross violations of human rights with impunity” according to a report released on Monday by an independent United Nations group looking into military-business ties in the South East Asian country.

In a statement, the UN Independent International Fact-Finding Mission on Myanmar called on the international community to impose targeted sanctions and arms embargoes on the Myanmar military.

The mission members declare that their latest report on Myanmar has established, for the first time, the degree to which the country’s military uses its own businesses, foreign companies and arms deals to support “brutal operations” against ethnic groups that constitute “serious crimes under international law”, bypassing civilian oversight and evading accountability.

According to the mission, the military, known as the Tatmadaw, have carried out “extensive and systematic” human rights violations” against civilians since 2016, including forcibly deporting more than 700,000 ethnic Rohingya to Bangladesh. During this period, they say, at least 14 foreign firms, from seven nations, supplied them with fighter jets, armored combat vehicles, warships, missiles and missile launchers.

The chairperson of the mission, Marzuki Darusman – a lawyer, human rights campaigner and former Attorney-General of Indonesia – said that the recommendations in the report, which include encouraging investors to engage with businesses that are not affiliated with the military, is to “erode the economic base” of the military, making it harder for them to block reforms, violate human rights and carry out operations without oversight:

“We have to promote economic ties with non-Tatmadaw companies and businesses in Myanmar. This will foster the continued liberalization and growth of Myanmar’s economy, including its natural resource sector, but in a manner that contributes to accountability, equity and transparency for its population.” 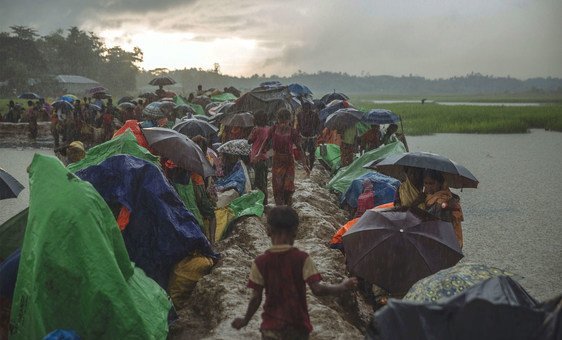 Rohingya refugees fleeing conflict and persecution in Myanmar., by IOM/Mohammed

In previous statements, the Mission has said that both men should be investigated and prosecuted for genocide, crimes against humanity and war crimes.

MEC and MEHL are involved in a diverse range of activities, including jade and ruby mining in Kachin and Shan states. International human rights and humanitarian law violations, including forced labour and sexual violence, have, say the report’s authors, been perpetrated by the Tatmadaw in northern Myanmar in connection with their business activities.

The report details how other, so-called “crony companies”, with close links to the Tatmadaw financed development projects in Rakhine State, such as the construction of a barrier fence along the Myanmar-Bangladesh border, that “furthered the military’s objective of re-engineering the region in a way that erases evidence of Rohingya belonging to Myanmar.”

Officials of such companies should be investigated, according to the mission, with “a view to criminal prosecution”, for contributing to crimes under international law, including crimes against humanity.

Foreign companies also come under scrutiny in the report, which found that at least 15 foreign firms have joint ventures with the military, while 44 others have some form of commercial ties with military-owned businesses.

These foreign companies, says the report, risk contributing to, or being linked to, violations of international human rights and humanitarian law, and should conduct heightened due diligence to ensure they are not benefiting the Tatmadaw.

The Fact-Finding Mission will present its final report to the UN Human Rights Council in September 2019.