UNICEF/Sokhin
A 16-year-old child swims in the flooded area of Aberao village in Kiribati. The Pacific island is one of the countries worst affected by sea-level rise.

Further inaction on climate change is “simply not an option”, United Nations Secretary-General António Guterres said on Wednesday in an opinion piece where he called for “rapid and deep change in how we do business, generate power, build cities and feed the world.”

If the world is to prevail against climate change, “then we must find the political will to take transformative measures,” declared the UN chief. 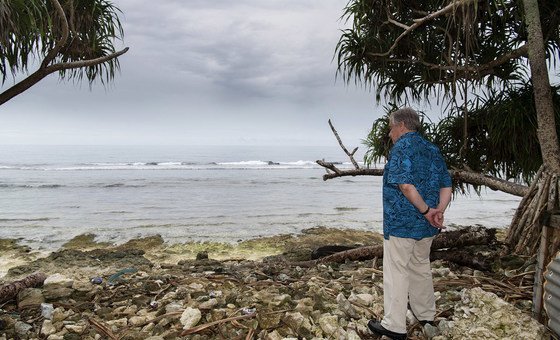 “Leaders must come to the UN summit in September armed with solutions as well as speeches”, he stressed, referring to the action-focused meeting he is convening in September to mobilize political ambition on climate change and push forward the goals of the Paris Agreement, which encompass greenhouse-gas-emissions mitigation, adaptation, and finance.

On his recent Pacific tour to the frontlines of the global climate emergency, he heard the rallying cry “Save Tuvalu; save the world,” while visiting the tiny island archipelago that is battling sea level rise and coastal erosion as warming temperatures threaten the region.

“I was there to show solidarity with those suffering the worst impacts of climate change and to draw attention to the innovative climate action underway in the region,” explained the UN chief.

Sea level rise in some Pacific countries is “four times greater than the global average”, he stated, saying that it poses “an existential threat to several island States”.

“Oceans are in serious trouble, from coral bleaching to biodiversity loss to plastic pollution”, he warned. “Extreme weather events are on the rise, jeopardizing lives and livelihoods”.

Mr. Guterres spelled out: “Nowhere have I seen the heartbreaking impacts of climate change more starkly than in Tuvalu, a remote coral atoll nation where the highest point is less than five metres above sea level.”

He recounted a visit to the home of a family “who live in a state of perpetual anxiety about inundation by the relentlessly rising seas just steps away”.

The UN chief was “deeply moved by the warmth of the Tuvaluan people and their intense devotion to their land, way of life and cultural heritage”, he said, adding that while these communities have contributed almost nothing to climate change, because of big emitters, “they are now fighting to preserve their country’s very existence”.

The ‘whole planet’ at stake

“Make no mistake: it is not just Tuvalu, or small islands, or the Pacific at stake”, underscored the Secretary-General. “It is the whole planet”. 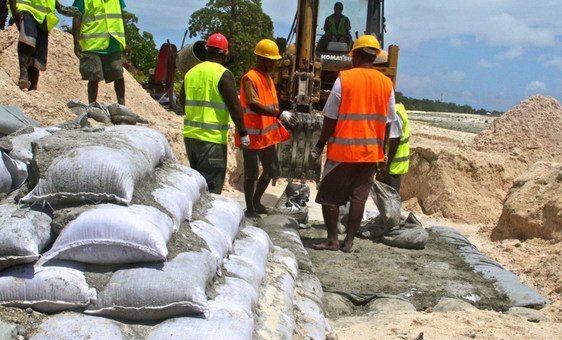 Lauren Day/World Bank | Building seawalls along the coastline in Tarawa, Kiribati, to to protect against high tides or tsunamis.

What is happening to these countries “is a sign of what is in store for the rest of us”, he warned. “People all over the world are starting to feel the impacts of the climate emergency – and these will only worsen”.

The UN chief recalled meeting young children who “are already fearful for their future and are relying on my generation to secure it”.

“As Secretary-General of the UN, I have many battles”, he said. “But as a grandfather, the struggle against climate change is the fight of my life”.

Noting that “we are not winning”, Mr. Guterres urged that political will must be fund “to take transformative measures”.

“We must acknowledge the moral authority of the Pacific nations, frontrunners in the race against the climate emergency”, he stated

“And we must find sustainable solutions, invest in renewable energies and increase resilience and adaptation”.

The clearly laid-out goals of the scientific community to achieve carbon neutrality by 2050 and limit global warming to 1.5C by the end of the century, are “essential”, according to the UN chief. 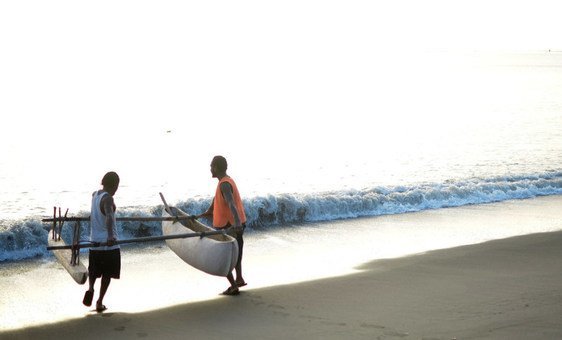 As the global community pursues those goals, he restated his message to Governments to “shift taxes from salaries to carbon”, saying “we should tax pollution, not people”.

He also urged them to “stop subsidizing fossil fuels” because “taxpayers’ money should not be used to boost hurricanes, spread drought and heat waves, and melt glaciers”.

“Stop building new coal plants by 2020”, he continued. “We need a green economy, not a grey one”.

He stressed that we have the tools to tackle the climate crisis, to “save lives and property, breathe less polluted air, access cleaner water and protect biodiversity”.

“Climate action could also yield a direct economic gain of $26 trillion, compared to business as usual, through to 2030, making it a cost-effective option” argued the UN chief.

Turning to his climate action summit, Mr. Guterres flagged that he is asking world leaders to come “not just with speeches” but with “plans to transform energy, mobility, industry and agriculture”, and to implement their commitments to climate financing, “not out of generosity but enlightened self-interest”.

“Urgent climate action is a choice we can – and must – make”, concluded the Secretary-General. “As the people of Tuvalu know all too well: Saving them will save us all”.