UNICEF/Quan
Students at the Quang Son Daycare Center in Ninh Thuan Province, Viet Nam. The daycare center serves children who are ethnic minorities in the area, as well as children with disabilities.

The UN Educational, Scientific and Cultural Organization UNESCO has long celebrated the power of International Book and Copyright Day, marked on 23 April, but this year, special attention is being paid to the protection of indigenous languages, many of which are threatened with extinction.

Beyond just pure enjoyment, books have always been considered a bridge between generations and across cultures. “Books are a form of cultural expression that lives through and as part of a chosen language”, said UNESCO Director-General Audrey Azoulay, in a message for the day.

“Each publication is created in a distinct language and is intended for a language-specific reading audience. A book is thus written, produced, exchanged, used and appreciated in a given linguistic and cultural setting”.

Highlighting the importance of this dimension, as 2019 also marks the International Year of Indigenous Languages, Ms. Azoulay emphasized the “commitment of the international community in supporting indigenous peoples to preserve their cultures, knowledge and rights.”

On this occasion, UNESCO and the international organizations representing the three major sectors of the book industry – publishers, booksellers and libraries – also select the World Book Capital from year to year, to maintain, through its own initiatives, the impetus of the Day’s celebrations.

“Don’t give up on your dreams.” 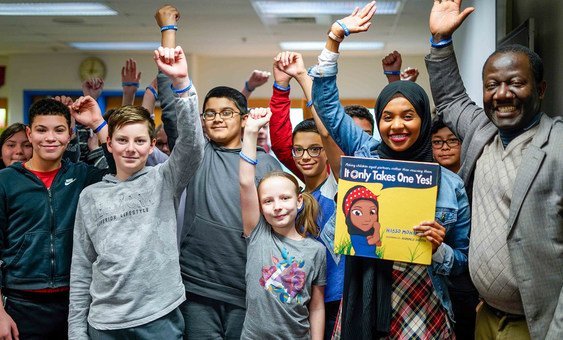 Speaking of her own experience as a 24-year-old former refugee from Somalia, Habso Mohamud, wrote It Only Takes One Yes, an illustrated children’s book to inspire children around the world.

The project supported by the UN refugee agency, UNHCR, tells the story of little Nasra, who dreams about being a queen who can feed the hungry and make books grow from trees, so that everyone could read.

Growing up in Dadaab refugee camp, in Kenya, Habso had to walk 45 minutes to get to school every day. Even so, she would never miss a class.

“The love of education really came from when I was in the refugee camp,” Habso explains. “I wouldn’t miss out on those opportunities even though they were far from my home.”

Now Habso is sharing that message with schoolchildren at readings across the United States, where she resettled with her family in 2005. By telling her story, she also aims to challenge stereotypes about refugees and mental health.