“Prime Minister Modi not only recognizes, knows and understands” the benefits of taking action to stop global warming, said the UN chief, but also “acts with enormous energy to make this change. And this leadership is today more necessary than ever.”

According to the UN Environment Programme (UNEP), Prime Minister Modi has been recognized for his extensive efforts to control plastic pollution, including a pledge to eliminate all single-use plastic in India, by 2022. He has also been recognized for his joint initiative with French President Emmanuel Macron to champion the International Solar Alliance – a global partnership to scale up solar energy use and reduce dependence on fossil fuels.

In his prize-giving speech, Mt. Guterres called on other world leaders to draw lessons from India and apply them in their own circumstances to “win the race against climate change.”

He also highlighted that climate action and development are not contradictory but are mutually supportive.

Prime Minister Modi, in accepting the award, said that he was doing so on behalf of millions of Indians “who protect the environment each day.”

“From fisherfolk who only take what they need or tribal communities who think of forests as their family. We will never be able to tackle climate change without bringing climate into our culture. And this is why India is taking so much action for our climate,” said the Indian leader.

Giles Clarke Secretary-General António Guterres pays visits to the Golden Temple in Amritsar, India, where he expressed his gratitude for a place that receives and shares with everybody.

Secretary-General shares a meal at a Langar

Also, on Wednesday, Secretary-General visited the Golden Temple in the city Amritsar, where he attended Langar – a community kitchen run by Sikh volunteers where people from all backgrounds and communities are provided nutritious food and clean water, at no cost.

During his visit, Mr. Guterres expressed his deep gratitude to the “wonderful practice that the Golden Temple represents, receiving everybody, sharing with everybody the food, but, more than the food, sharing this wonderful spirit of peace, of harmony, of understanding that we badly need in today’s world.”

The Langar at the Golden Temple is attended by thousands of people and pilgrims each day. It is the biggest community kitchen in the world, open 24 hours a day and uses no plastic or disposable utensils and cutlery.

Mr. Guterres is currently on his maiden visit to India as Secretary-General, during which he paid homage to Mahatma Gandhi on the 149th anniversary of his birth; inaugurated ONE UN House – the newly-refurbished building housing UN offices; held bilateral meetings with top Indian Government officials and spoke at the Mahatma Gandhi International Sanitation Convention, among other engagements. 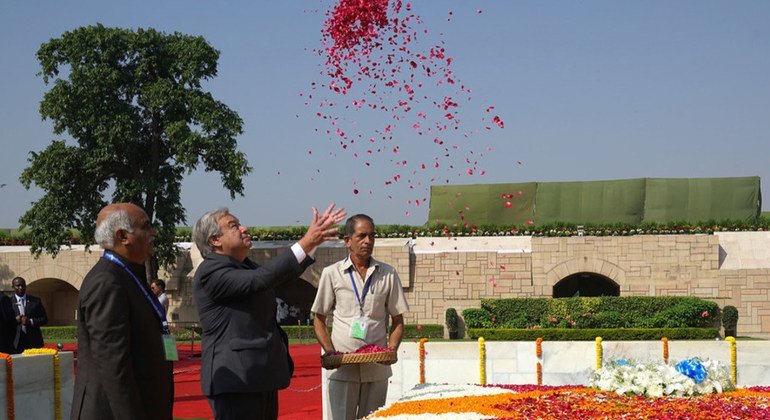 Paying respects at Gandhi memorial On 2 October, the birth-anniversary of Mahatma Gandhi, Secretary-General Guterres (right) paid his respects to the world leader of non-violence at Raj Ghat, a memorial dedicated to the Mahatma. Giles Clarke

UN Champions of the Earth award

Established by UNEP in 2005, the Champions of the Earth award recognizes “outstanding leaders” from Government, civil society and the private sector whose actions have had a positive impact on the environment.

Other winners of the Champions of the Earth award for 2018 are: Impossible Foods and Beyond Meat, an initiative creating high-quality vegetarian meat-alternatives; the Zhejiang River Chiefs programme, which works for protecting water from pollution as well as ecological restoration; Joan Carling, an indigenous and environmental rights activist; Cochin International Airport, the world’s first to be fully solar-powered; and French President Macron, for his international cooperation on environmental action.