OCHA/Sheldon Casimir | Surveying the aftermath of Hurricane Maria in Dominica. Maria was one of several storms that devastated the Caribbean region during the 2017 Atlantic hurricane season.

Hurricanes, monsoon floods and continuing severe drought made 2017 the costliest year ever for severe weather and climate events, according to a new report by the United Nations weather agency launched on the eve of World Meteorological Day.

“The start of 2018 has continued where 2017 left off – with extreme weather claiming lives and destroying livelihoods,” said Petteri Taalas, Secretary-General of the World Meteorological Organization (WMO) said Thursday.

Now in its 25th year, the WMO Statement on the State of the Global Climate in 2017 drew attention to the high impact that extreme weather had on economic development, food security, health and migration, pointing to estimates showing disaster losses from weather and climate-related events at $320 billion – the largest annual total on record.

The statement confirmed that last year was one of the three warmest on record, and the warmest not influenced by an El Niño event. It also examined other long-term indicators of climate change, such as increasing carbon dioxide concentrations, sea level rise, shrinking sea ice and ocean heat.

“The Arctic experienced unusually high temperatures, whilst densely populated areas in the northern hemisphere were gripped by bitter cold and damaging winter storms. Australia and Argentina suffered extreme heatwaves, whilst drought continued in Kenya and Somalia, and the South African city of Cape Town struggled with acute water shortages,” Mr. Taalas reflected on 2017.

According to the report, the North Atlantic hurricane season was not only the costliest ever for the United States, but it also eradicated decades of small Caribbean islands’ development gains.

“Since the inaugural Statement on the State of the Global Climate, in 1993, scientific understanding of our complex climate system has progressed rapidly,” Mr. Taalas stated.

“This includes our ability to document the occurrence of extreme weather and climate events, the degree to which they can be attributed to human influences, and the correlation of climate change with epidemics and vector-borne diseases,” he continued.

Compiled by WMO with input from national meteorological services and UN partners, the statement details that 2017 global mean temperatures were about 1.1 °C above pre-industrial temperatures. 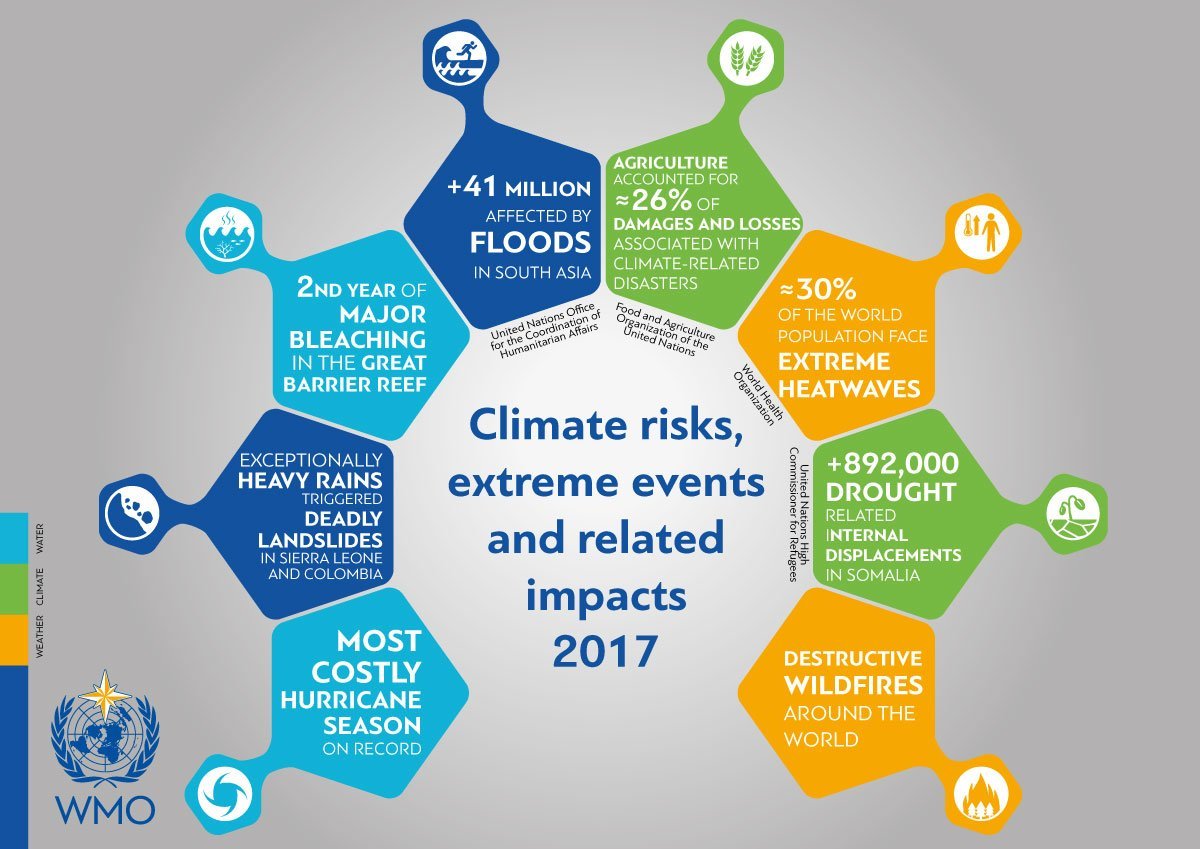 Source: WMO
State of the Global Climate in 2017

“In the past quarter of a century, atmospheric concentrations of carbon dioxide have risen from 360 parts per million to more than 400 ppm. They will remain above that level for generations to come, committing our planet to a warmer future, with more weather, climate and water extremes,” Mr. Taalas asserted.

The report revealed that the overall risk of heat-related illness or death has climbed steadily since 1980, with around 30 per cent of the world’s population now living in climatic conditions that deliver potentially deadly temperatures at least 20 days a year.

Additionally, from November 2016 to December 2017, 892,000 drought-related displacements were recorded.

“Now more than ever, we need to be weather-ready, climate-smart and water-wise,” concluded Mr. Taalas.