UN Photo/Eskinder Debebe
Participants at the opening of the annual Operational Segment of the UN Economic and Social Council (ECOSOC).

There are serious threats to the 2030 Agenda for Sustainable Development and the United Nations, especially its development system, must be effectively reformed in order to be able to limit the impact of those threats Secretary-General António Guterres said on Tuesday.

In his address to the opening of the annual operational segment of the Economic and Social Council (ECOSOC), Mr. Guterres warned that the world is facing a crisis of legitimacy, confidence and trust, rooted in legitimate fears

And while the benefits of globalization should be clear to all, “too many are being left behind.”

“Women are still far less likely to participate in the labour market – and gender pay gaps remain a global concern. Youth unemployment is at alarming levels. And inequalities are rampant – stretching the fabric of societies to the breaking point and undermining the social compact,” he stated, pointing out that “a handful of men hold the same wealth as half of humanity.”

Mr. Guterres underscored that exclusion resulted in frustration, alienation and instability.
“All of this compels us to do all we can to achieve inclusive and sustainable development – a goal in its own right, but also our best form of prevention against all kind of risks,” Mr. Guterres stressed.

An economic and social model that drives exclusion and environmental destruction cause deaths, missed opportunities, division and future conflicts.

“We need a global economy that works for all and creates opportunities for all,” he asserted.

According to the UN chief, the 2030 Agenda is crucial to rebuild the trust needed for fair globalization.

The Secretary-General flagged poverty eradication as the UN’s top priority, with the 2030 Agenda acting as its roadmap and the goals and targets its tools to get there.

He saw the Sustainable Development Goals (SDGs) as outlining the Organization’s commitment to expand dignity and opportunity for all on a healthy planet by empowering women, meaningfully including young people, reducing climate risk, creating decent jobs and mobilizing clean investments for inclusive growth.

He underscored the need to support countries’ efforts to mobilize domestic resources, which must be accompanied by the international community’s commitment to fight tax evasion, money laundering and illicit financial flows, which threaten development.

“We are focused on building a system that is demand-driven, oriented around achieving results at scale, and accountable in providing support to achieve the 2030 Agenda,” Mr. Guterres said, mentioning a proposed a set of global adjustments to make operations on the ground “more cohesive, effective and efficient.”

He encouraged all present to take inspiration from the 2030 Agenda to forge the future we want.

“We are now closer than ever to repositioning sustainable development at the heart of the organization and to having a development system that is an even stronger partner as we seek to deliver for people,” said the UN chief.

“Together, let us make good on our shared promise to humanity – a future of prosperity, peace and dignity for all,” he concluded. 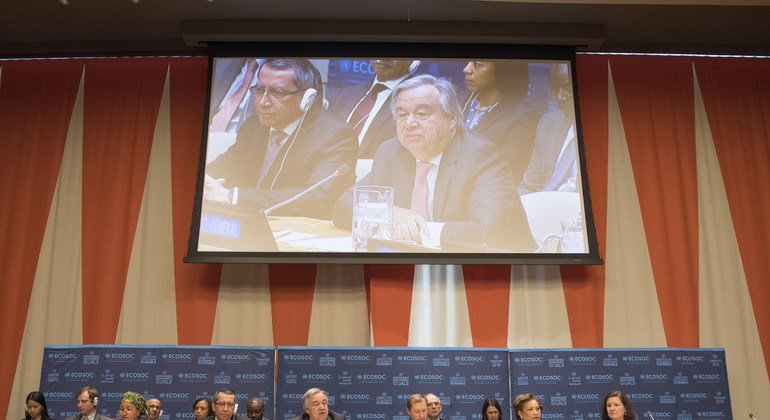 Opening the meeting, Marc Pecsteen de Buytswerve, Permanent Representative of Belgium to the United Nations and Vice-President of ECOSOSC said that repositioning the UN’s development system would be a unique opportunity to create a more integrated, effective, efficient and accountable system that matches the world’s commitments.

In short, he said, a development system that is “fit for purpose.”

He referred to the 2030 Agenda as demonstrating the commitment of Member States to promote peaceful, just and inclusive societies based on human rights, gender equality, empowerment of all women and girls, and free from poverty and fear and violence.

Mr. Pecsteen recalled the Secretary-General’s vision and concrete proposals to realign and reinvigorate the UN development system, which is necessary for the adequate and timely response Member States expect from the UN in the 21st century to help deliver on the 2030 Agenda promises.

He thanked Mr. Guterres for his leadership, vision and determination “to take on a challenge that is not easy,” adding that it was now up to the Member States to be “as bold in their desire to transform the system.”

He detailed that the ECOSOC Segment for Development will lay the groundwork for the consensus that will be forged in the coming weeks.

Panelists include senior government representatives from capitals, board chairs, UN leaders and key partners in the system.

Also addressing the meeting, Amina Mohammed, the UN Deputy Secretary-General, reiterated the importance of utilizing the opportunities offered by the  2030 Agenda to address the myriad challenges facing the world as well as to seize the momentum offered by it to ensure that the Organization is “fit to support” national efforts to realize the global goals.

In that context, she highlighted the important role that UN Resident Coordinators have to play.

“And it is at the centre of the mandate of the quadrennial comprehensive policy review,” she added.

The Policy Review is the mechanism through which UN Member States assess the effectiveness, efficiency, coherence and impact of UN development work. It also provides policy orientations for development cooperation at country level.

In her remarks, Ms. Mohammed also stated that strengthened Resident Coordinator system would ensuring a more accountable UN development system on the ground, one that is more responsive to national needs and more capable to deliver meaningful results.

“A system that can draw on the expertise across all entities – including non-resident entities, DESA [the Department of Economic and Social Affairs] and the regional economic commissions – to respond to country priorities,” she added.