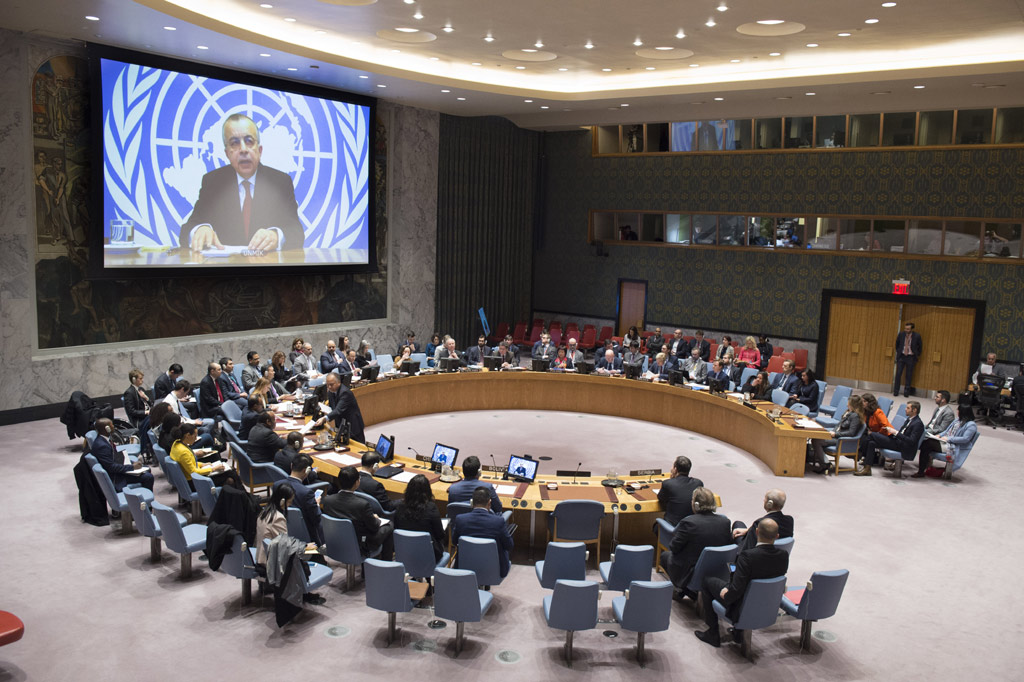 Zahir Tanin (on screen), Special Representative of the Secretary-General and Head of the UN Interim Administration Mission in Kosovo (UNMIK), briefs the Security Council. UN Photo/Loey Felipe
Even though significant differences persist between political leaders in Kosovo, the potential for trust and more forward-looking decision-making to address the challenges there should not be underestimated, a senior United Nations official told the Security Council today.


“I am convinced these leaders have a broader understanding of the nature of the challenges that need to be overcome, and equally, not to continuously postpone action to another day,” said Zahir Tanin, the Special Representative of the Secretary-General in Kosovo and the head of the UN Interim Administration Mission there (UNMIK), on Wednesday

Briefing the Council via a video-link, the senior UN official also informed Council members of new strategy of the European Union (EU) for the Western Balkans, launched on 6 February, and said it is “the most ambitious and far-reaching framework for engagement” since 2003.

“2018 can present a new momentum for this dialogue, and as the EU High Representative herself highlighted yesterday, the dialogue could be positively concluded, given sufficient will from the leaders, and adequate encouragement from the international community,” he added.

Further in his briefing, Mr. Tanin stressed the importance of solving the 16 January assassination of one of Kosovo’s most prominent Serbian politicians Oliver Ivanovic.

Identifying those responsible and holding them accountable would prove another important test of the Kosovo institutions, he added.

The senior UN official also spoke of recent examples of cooperation between Pristina and Belgrade, including in the immediate aftermath of the Ivanovic murder and subsequent Kosovo visit of Serbian President Aleksandar Vucic.

“It is important to note that the leaders in Belgrade and Pristina have reacted to this event in a prompt and responsible manner,” he said

Mr. Tanin also informed the Security Council of ongoing challenges in ensuring the rule of law; strengthening the role of women and youth in politics, responding to the economy and social conditions in Kosovo; and building trust between its communities, and underscored the importance of strong political will and unity to overcome the obstacles.