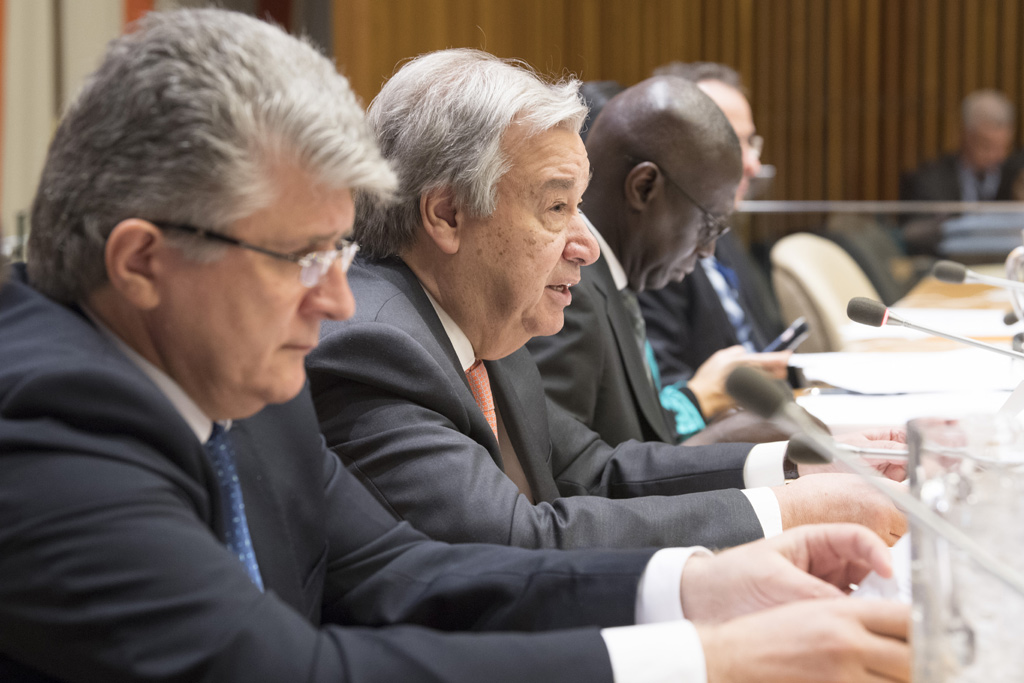 Secretary-General António Guterres (second left) addresses the 2018 opening session of the General Assembly’s Committee on the Exercise of the Inalienable Rights of the Palestinian People. UN Photo/Eskinder Debebe

International consensus on a two-State solution to end the Israeli-Palestinian conflict could be eroding “at a time when it is more important than ever,” Secretary-General António Guterres said on Tuesday, calling the ‘question of Palestine’ one of the longest unresolved issues on the agenda of the United Nations.

“We must face today’s difficult reality,” Secretary-General António Guterres told the opening of the 2018 session of the Committee on the Exercise of the Inalienable Rights of the Palestinian People, which was created by the UN General Assembly in 1975 to seek and end to the Israeli occupation and ensure the achievement of a two-state solution in the Middle East conflict.

“Negative trends on the ground have the potential to create an irreversible one-state reality that is incompatible with realizing the legitimate national, historic and democratic aspirations of both Israelis and Palestinians,” he added.

After decades, “convergence and global consensus could be eroding, making effective concerted action more difficult to achieve,” he stressed, noting “illegal” settlement expansion in the occupied West Bank as “a major obstacle to peace.”“It must be halted and reversed,” he maintained. Moreover, the humanitarian and economic situation in Gaza remains dire, with predictions by the UN Country Team in the Occupied Palestine Territory that unless concrete action is taken to improve basic services and infrastructure, it will become unliveable by 2020.

“Yet,” the UN chief continued “Gaza remains squeezed by crippling closures and a state of constant humanitarian emergency” as two million Palestinians struggle daily with an electricity crisis, chronic unemployment and a paralyzed economy – amid an unfolding environmental disaster.

The latest funding shortfall in the UN Relief and Works Agency for Palestine Refugees in the Near East (UNRWA) will further impair critical services and threaten the human security, rights and dignity of five million Palestine refugees across the Middle East.“I appeal to the generosity of the international community not to let that happen,” implored Mr. Guterres, adding “Reconciliation is a key step in reaching the larger objective of a Palestinian State and lasting peace.”He reiterated his commitment to supporting the parties’ efforts to a two-State solution.

“A two-State solution is the only way to achieve the inalienable rights of the Palestinian people and secure a sustainable solution to the conflict,” concluded the Secretary-General.