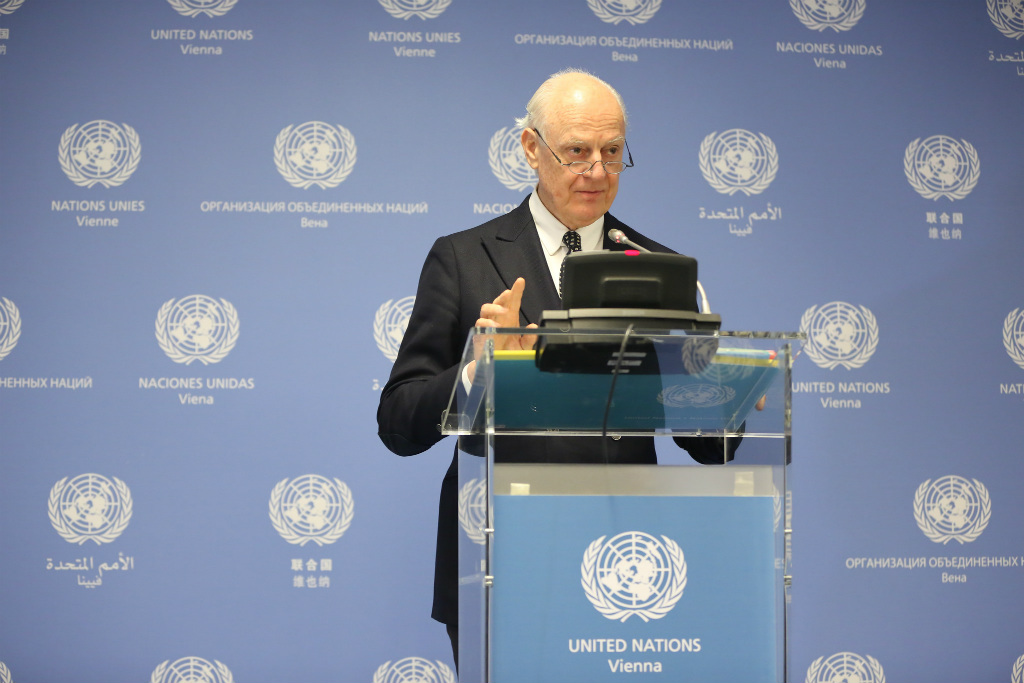 UN Special Envoy on Syria Staffan de Mistura speaking to reporters as Special Meeting on Syria wraps up at the UN in Vienna. Photo: Stanislav Jenis
United Nations Secretary General António Guterres will send his Special Envoy for Syria, Staffan de Mistura, to Sochi next week to attend the Russia-sponsored Congress of the Syrian National Dialogue, talks reportedly on a political solution towards ending the seven-year Syrian conflict.

Spokesman Stéphane Dujarric said the UN chief, who is in Addis Ababa, Ethiopia, attending the African Union Summit, was fully briefed by Mr. de Mistura, who himself just wrapped up two days of UN-facilitated talks with Syrian Government and opposition delegations in Vienna.

The Spokesman said that in making the decision to send his envoy, Mr. Guterres took into account Russia’s assertion that the outcome of the Sochi meeting, which will be held on 29 and 30 January, would be brought to Geneva as a contribution to the UN-backed intra-Syrian talks, in accordance with Security Council resolution 2254.

Adopted in 2015, that resolution endorsed a road map for a political process to end the conflict in Syria, including specific language on governance, a constitution and elections.

“The Secretary-General is confident that the Congress in Sochi will be an important contribution to a revived intra-Syrian talks process under the auspices of the United Nations in Geneva, based on the full implementation of the Geneva Communiqué and Security Council resolution 2254,” said Mr. Dujarric.

Closing out the constitution-focused special 9th round of intra-Syrian talks last night in Vienna, Mr. de Mistura told reporters that “the ultimate goal of a constitutional process is to enable the Syrian people to freely and independently determine their own future in UN-supervised parliamentary and presidential elections, meeting the requirements laid out in resolution 2254.”

Recalling that the only sustainable solution to the current crisis in Syria is through “an inclusive and Syrian-led political process,” the Special Envoy said it was his assessment that any Constitutional Committee would “at the very least” comprise Government and Opposition representatives in the intra-Syrian talks, Syrian experts, civil society, tribal leaders and women; and that care would be taken to ensure adequate representation of Syria’s ethnic and religious components.

The conflict is Syria, which erupted in the wake of massive popular demonstrations in 2011, has, according to the UN relief wing, been marked by unparalleled suffering, destruction and disregard for human life. Some 13.1 million people now require humanitarian assistance, including close to three million people in need trapped in besieged and hard-to-reach areas.

“I share the immense frustration of millions of Syrians, inside and outside the country, at the lack of a political settlement,” Mr. de Mistura said, expressing hope that the talks in Sochi will contribute to a revived and credible intra-Syrian talks process, which he plans to reconvene “in the near future.”

“Ultimately, what is required is political will. It is high time that diplomacy, dialogue and negotiation prevail for the interest of all Syrians,” he said.