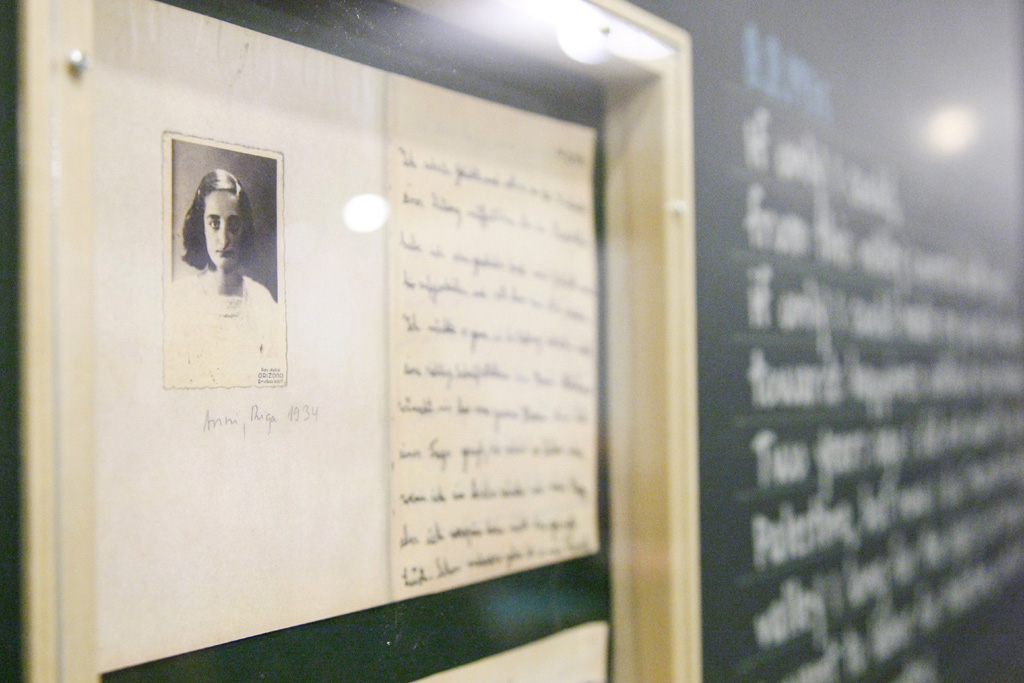 Close-up of a photograph of Anne Frank, part of the exhibit ‘Monument of Good Deeds: Dreams and Hopes of Children During the Holocaust,’ which was held in 2012 at UN Headquarters. UN Photo/JC McIlwaine
Calling on the world to “stand together against the normalization of hate, United Nations Secretary-General António Guterres has stressed in his message for the International Day dedicated to honouring Holocaust victims that everyone has a responsibility to quickly and decisively resist racism and violence.

Mr. Guterres recalled that the International Day, marked annually on 27 January, was created to honour the memory of six million Jewish men, women and children that perished in the Holocaust and countless others lost their lives as cruelty convulsed the world.

Yet, decades since the Second World War, there is still the persistence of anti Semitism and an increase in other forms of prejudice.

Citing Neo-Nazis and white supremacy groups as among the main purveyors of extreme hatred, the UN chief said that too often, vile views are moving from the margins to the mainstream of societies and politics.

“Whenever and wherever humanity’s values are abandoned, we are all at risk,” stressed the Secretary-General.

“All of us have a responsibility to quickly, clearly and decisively resist racism and violence,” he stated, adding: “Through education and understanding, we can build a future of dignity, human rights and peaceful coexistence for all.”

For his part, UN High Commissioner for Human Rights Zeid Ra’ad Al Hussein held the painful day of remembrance for Holocaust the victims as forcing us “to contemplate the horrors to which bigotry, racism and ultimately lead.”

“The sadistic brutality of the atrocities inflicted by the Nazi regime on Jews, Roma, Slavs, disabled people, political dissidents, homosexuals and others was nourished by layer upon layer of propaganda, falsifications and incitement to hatred,” he stated, adding how they were denigrated and smeared, “one after another, their rights were refused, and finally, even their humanity was denied.”

Mr. Zeid pointed to the statement of Primo Levi, who survived the Auschwitz Birkenau concentration camp: “It happened, therefore it can happen again.”

“As we honour the victims of the Holocaust,” Mr. Zeid continued, “we must also acknowledge the need to prevent the recurrence of anti-Semitism and all forms of racial and religious hatred and discrimination today.”

He specified the importance of upholding independent rule of law institutions and a free press; maintaining respect for human rights; and education, which must be at the core of all efforts to combat anti-Semitism, racism, and all forms of discrimination.

“In honouring the victims of the Holocaust, we must recognise that only if we regard each other as fully equal in dignity and rights will we be able to come together to overcome the many challenges facing humanity,” he concluded.

At the same time, Audrey Azoulay, the Director-General of the UN Educational, Scientific and Cultural Organization (UNESCO), citied the Day as a call to strengthen nations’ commitment to peace.

Recalling the possibility of the worst, also carries a memory that must be forward-looking, she said, adding that combating anti-Semitism, in whatever form, “is at the heart of this fight” in which everyone has a role to play.

“We can build up awareness against forgetting, denial, historical revisionism, relativization of crimes and the return of stereotypes that fuel hatred. We can oppose the manipulation of facts by speaking the truth,” she asserted.

Among a series of events taking place across the UN system, the annual United Nations Holocaust Memorial Ceremony hosted by Ms. Alison Smale, UN Under-Secretary-General for Global Communications, will take place on Wednesday 31 January. The Secretary-General, President of the seventy-second session of the General Assembly, Representatives of Israel, Germany and the United States, will deliver remarks.