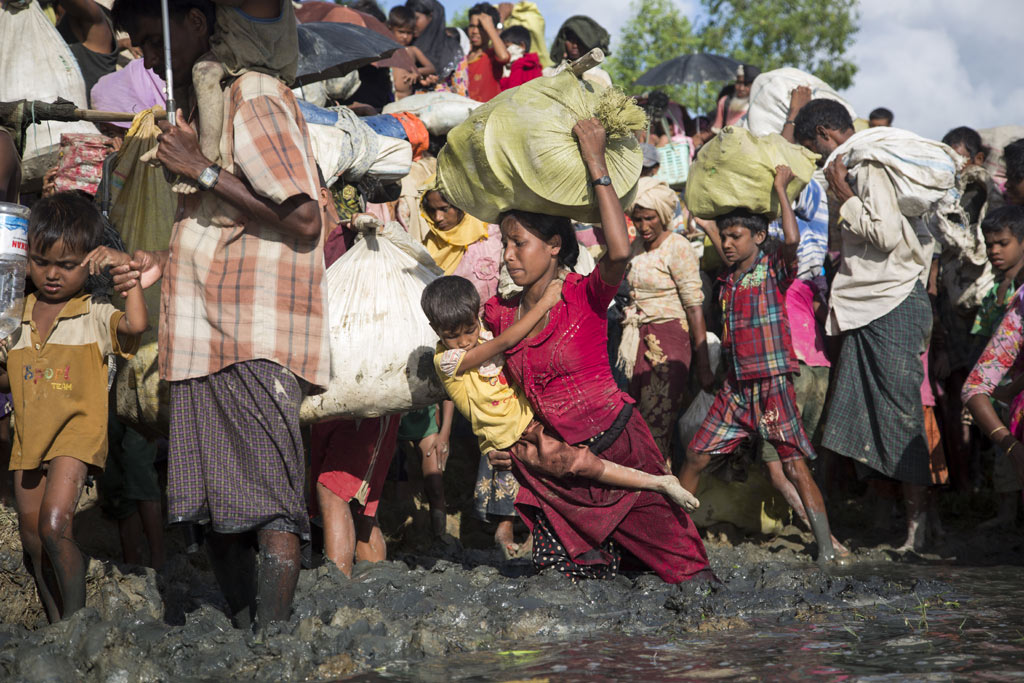 The speed and scale of people fleeing Myanmar has triggered a humanitarian emergency in Bangladesh, where hundreds of thousands of refugees now depend on humanitarian assistance for shelter, food, water and other life-saving needs, says the United Nations migration agency.

“The seriousness of the situation cannot be over-emphasized,” said International Organization for Migration (IOM) Bangladesh Chief of Mission Sarat Dash in a press statement.

According to the IOM-hosted Inter Sector Coordination Group (ISCG) of aid agencies, an estimated 536,000 people have fled Myanmar and arrived in Cox’s Bazar over the past 47 days. Numbers spiked again when some 15,000 more crossed into Bangladesh between 9-11 October.

Prior to the August influx, infrastructure and basic services in Cox’s Bazar were already under strain as it hosted over 200,000 displaced Rohingya.

“These people are malnourished and there is insufficient access to clean water and sanitation in many of the spontaneous sites. They are highly vulnerable. They have fled conflict, experienced severe trauma and are now living in extremely difficult conditions,” underscored Mr. Dash.

With many of the new arrivals requiring immediate health assistance, agencies have appealed for $48 million to scale up primary health care in the new settlements over the next six months.

“The risk of an outbreak of communicable disease is very high given the crowded living conditions and the lack of adequate clean water and sanitation,” said IOM Senior Regional Health Officer Patrick Duigan, pointing out that maternal, newborn and child health care are also in desperately short supply.

Speaking to reporters at UN Headquarters in New York after a closed-door meeting with the Security Council, which included non-Council members from Myanmar and Bangladesh, as well as representatives of civil society, former UN Secretary-General Kofi Annan, in his capacity as Chair of the Advisory Commission on Rakhine state, said the “good discussion” had focused mainly on the report produced by the Commission which was welcomed by the UN in August.

“It was clear that everyone agrees on what needs to be done in the short-term: stopping the violence; getting humanitarian aid to those in need, and helping with the dignified and voluntary return for those [refugees] in Bangladesh,” he explained.

This particular point “is not going to be easy,” he continued, stressing that the refugees would only go back if they had a sense of security and confidence that their lives would be better. Mr. Annan recalled that his report had stated that the refugees not be put in camps and that they must be allowed to go back to their villages and helped to rebuild and reconstruct their lives.

He went on to say that key question of citizenship and verification was “a real problem for the Muslim community.”

Mr. Annan pointed out that State Counsellor Daw Aung San Suu Ky had accepted the recommendations in his report and had agreed to set up an implementation committee.

“The report is generally accepted and could form a framework and basis for action as we move forward; hopefully Myanmar and the international community can work together on these core issues,” he said, expressing the hope that the issue of Rakhine could be settled to give the country “time and space to address the wider issues in the country.”

Asked by a reporter about the tenor of the discussions in the Council, Mr. Annan said: “I would hope that the resolution that comes out urges the Government to really press ahead and create conditions that will allow the refugees to return in dignity and with a sense of and security.”

The international community, he said, appears prepared to engage Myanmar and work on a common roadmap based on his report, as a common basis, “to go forward together and try to stabilize the situation,” or else this would become a “long-term festering problem.”

Asked about next steps, Mr. Annan said: “We worked on this report [for a year and] my work is done. There is no ‘plan B.’ We have to tackle the root causes, and the report deals with that and [if there is serious implementation] could ensure that we won’t have repetition of the violence and attacks.”

At the same time, the Office of the High Commissioner for Refugees (UNHCR) has been working with the Government in a new ‘family counting’ exercise to collect data on the estimated 536,000 newly-arrived refugees and their needs.

“The exercise will enable the Government, UNHCR and other agencies to have a better understanding of the size and breakdown of the population and where they are located,” UNHCR spokesperson Andrej Mahecic told reporters at today’s regular press briefing in Geneva.

“It is key for getting the right aid to the right people. It will also help flag refugees with special protection needs, such as single mothers with small infants, people with disabilities, or children and elderly refugees who are on their own,” he added.

The exercise has so far counted 17,855 families – more than 70,000 individuals. It is currently being carried out in the Balukhali Extension and Kutupalong Extension camps and should cover an estimated 525,000 people over the coming weeks.