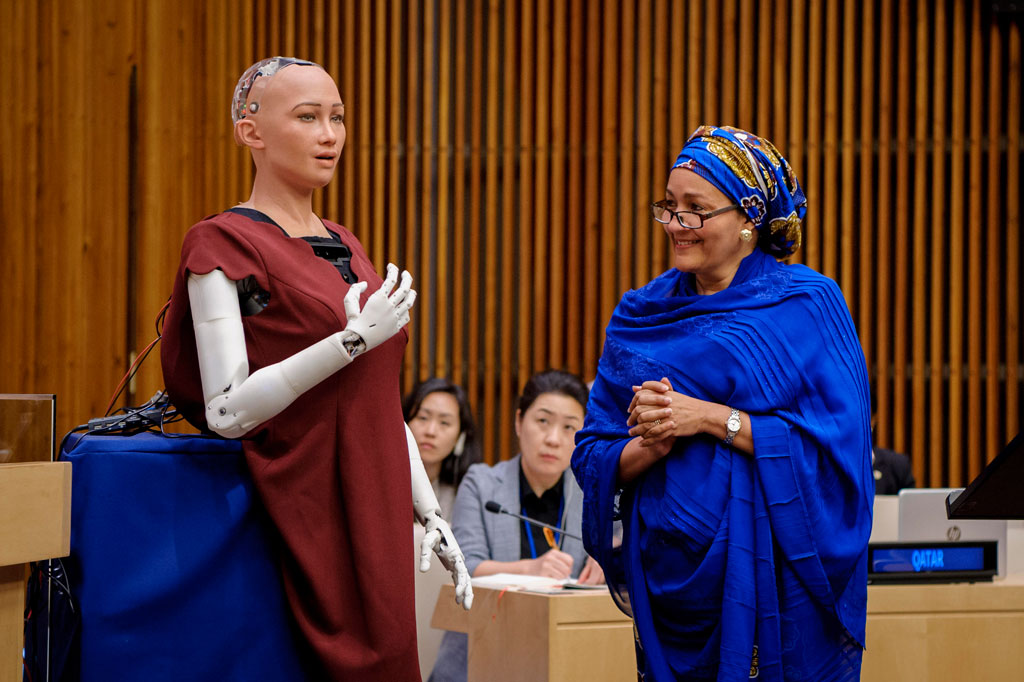 Artificial intelligence has the potential to accelerate progress on global development goals, but also poses a range of complex challenges, including ethical questions, human rights issues and security risks, speakers told a United Nations event today that featured a robot as one of the panellists.

A moment that drew big applause during the day-long event, ‘The future of everything – sustainable development in the age of rapid technological change,’ came when Sophia, a humanoid robot, had brief interaction with UN Deputy Secretary-General Amina J. Mohammed.

To Ms. Mohammed’s question about what the UN can do to help people in many parts of the world who have no access to the Internet or electricity, Sophia said “the future is already here. It’s just not very evenly distributed […],” quoting renowned science fiction writer William Gibson. “If we are smarter and focused on win-win type of results, A.I. [artificial intelligence] could help proficiently distribute the world’s existing resources like food and energy.”

Sophia is Hanson Robotics’ latest and most advanced robot. Sophia has also become a media sensation, having given numerous interviews to multiple media outlets, performed in concert, and even graced the cover of one of the top fashion magazines.

In her opening speech, Ms. Mohammed warned that despite profound potential for accelerating progress on the Sustainable Development Goals (SDGs), if technological progress is not managed well, it risks exacerbating existing inequalities.

“The influence of technology on our societies should be determined by the actions of us, humans, not by machines,” she said. “Technology is here for us to explore and use for the benefit of all.”

The meeting was co-organized by the UN Economic and Social Council (ECOSOC) and the UN General Assembly’s main economic and financial body (Second Committee).

ECOSOC President Marie Chatardová said that the long-term consequences of the deep technological changes underway, for economies and societies at large, are unknown.

“We are only starting to see the benefits, but we do need to assess the risks of these technologies,” she said.

Sven Jürgenson, of Estonia, Second Committee Chairman, said that AI-based solutions are taking his country’s digital society to the next level.

He said the Government is working on a full legal and cyber-risk management framework for using fully autonomous vehicles in regular road and traffic conditions. And door-to-door robot transport will reshape how goods are shipped and delivered locally.

“Today, Internet access is a social right in Estonia. Every Estonian resident has an electronic ID and nearly all public services are accessible online, including i-Voting in Estonian Parliamentary elections,” he said.

“The development of e-Estonia has not happened in one day – it took us 17 years to start from changing legislation and creating our first e-solutions,” he added.