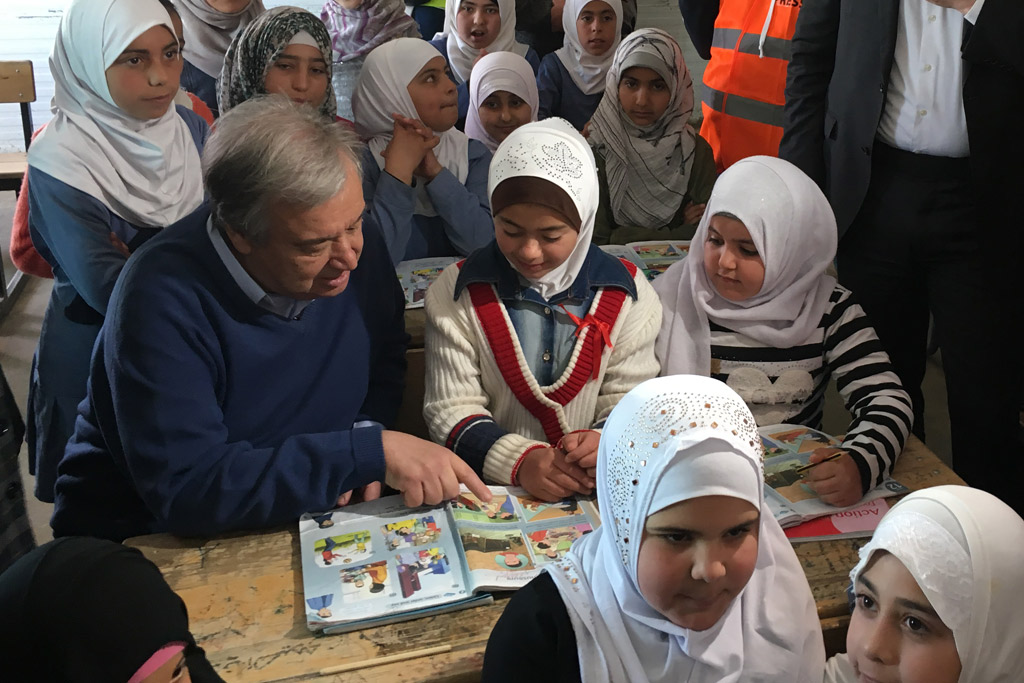 Visiting the Zaatari refugee camp in Jordan that is hosting about 80,000 Syrian refugees, the United Nations chief urged the parties to the conflict in Syria and the countries that have influence over them to realize that the crisis is not only a tragedy for Syrian people but also a threat to regional stability and global security.

“This is the moment for all countries that are involved, directly or indirectly in the conflict, to put aside their differences and understand […] the common interest from the fact that they are all threatened by the new risk of global terrorism,” UN Secretary-General António Guterres told reporters at a press conference at the camp.

“Solidarity with Syrian refugees is also a way to be able to express our capacity to guarantee global security. It’s not only an act of generosity. It’s also an act of enlightened self-interest,” he added, noting that by failing to support refugees, groups such as the Islamic State of Iraq and the Levant (ISIL/Da’esh) and al Qaida could use such inactions as arguments to further their own vested interests and put global security at risk.

In his remarks, Mr. Guterres also hailed the generosity of the Government and the people of Jordan for supporting refugees despite having a vulnerable economy, and appealed for international solidarity with countries such as Jordan that have been hosting Syrian refugees.

“I hope that that if all countries that have an influence on the Syrian situation are able to come together, these refugees, [who have been living here for more than four years,] will be able to restart their lives again, to find jobs, to work, to have a normal life,” he said.

He also underscored the importance of Arab unity and said that when Arab countries are divided, it has allowed others to intervene and to manipulate situations, creating instability, breeding conflict and facilitating activities of terrorist organizations.

VIDEO: ‘It’s terrible that the tragedy of Syria is still going on and on,’ UN Secretary-General António Guterres said today as he visited the Zaatari refugee camp in Jordan.

The UN Secretary-General further called on to the wider international community to increase their humanitarian support as well as to make sure that more opportunities are given to the refugees and to make sure that the countries that have an influence on the parties to the conflict “come together to put an end to this tragedy”.

Hope that one day, Syrian women will have the chance to go back to their lives

Also today, during his visit to camp, Mr. Guterres stopped by the Women and Girls Oasis, a women’s centre and safe space operated by the UN Entity for Gender Equality and the Empowerment of Women (UN Women) and took stock of cash-for-work programmes run by the UN.

“We no longer feel helpless, our work makes us feel productive and empowered,” one woman, a head tailor at a workshop at the Oasis, told the UN Secretary General.

There are three such Oases at the camp, and between them, they serve about 16,000 users per year.

Speaking with the women, Mr. Guterres reiterated the need to restore peace in Syria: “I hope one day these women can go back home and, when they return, they will have the chance to go back to their jobs and lives.”