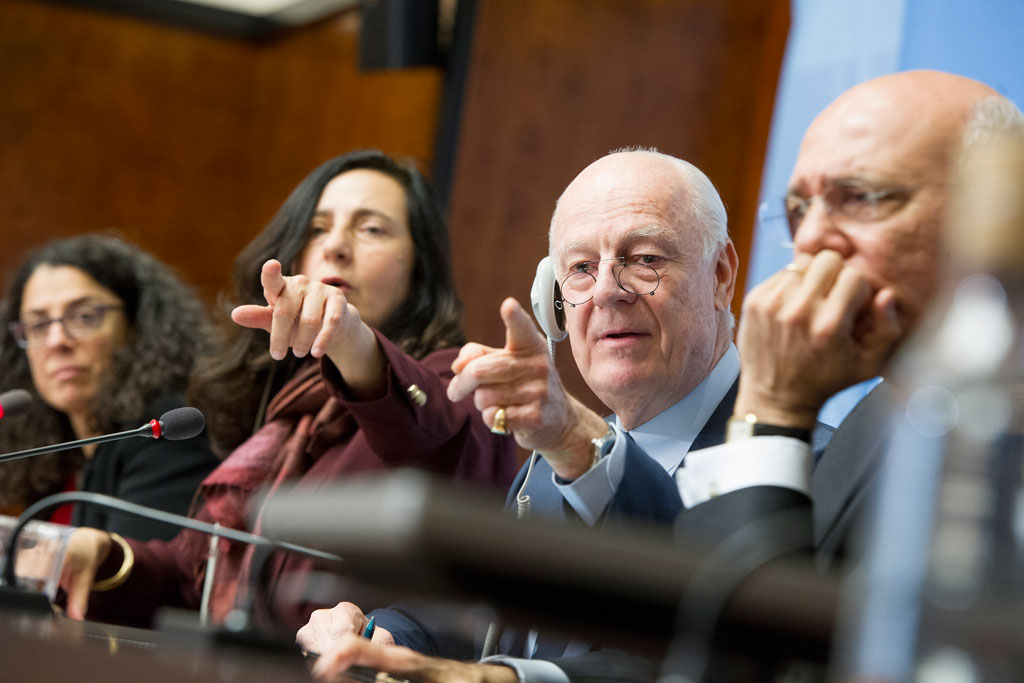 A day before negotiations on the crisis in Syria kick off in Geneva, the United Nations Special Envoy for the war-torn country acknowledged that while he is “not expecting a breakthrough,” the proactive momentum needs to be sustained, and the top United Nations relief official told the Security Council that the country’s humanitarian needs would remain critical for a long time.

“As has been stated so many times already, there is no humanitarian or military solution to this conflict,” the UN Emergency Relief Coordinator and Under-Secretary-General for Humanitarian Affairs, Stephen O’Brien, told the Security Council today.

“A genuine political commitment to peace will be needed if 2017 is to offer any different prospect than the death and destruction of the past six years,” he added, emphasizing the need for fighting to stop.

The conflict, now into its sixth year, has left hundreds of thousands of women, men and children dead and millions more dependent on aid both within the country and beyond Syria’s borders.

However, humanitarian actors continue face myriad challenges in reaching those most in need.

In particular, Mr. O’Brien voiced serious concerns over continued attacks on civilians and civilian infrastructure, which have further limited humanitarian access to those areas, as well as leading to further displacements that in turn add to the humanitarian needs.

He also underlined that the conflict has taken its worst toll on children: thousands have been killed and maimed or have lost their parents to the violence. Many more have suffered physical and psychological trauma, forced into early marriages and lag years behind in school.

The formal education system has lost about 150,000 education personnel and one in three schools in the country have been damaged, destroyed or rendered inaccessible, and 5.82 million children and youth from pre-school to secondary school-age are in need of education assistance inside Syria.

Concluding his briefing, the UN relief chief urged: “The eyes of all of Syria, and the eyes of the world, are looking to Geneva [where intra-Syrian negotiations will be held].”

“Millions of battered and beleaguered women, men and children depend on meaningful action and the constructive engagement by the Syrian parties and their allies […] to assure Syrians that an end to the conflict may finally be within reach.”

I am not expecting a breakthrough, but I am determined to keep the momentum – UN envoy

Also speaking to the press in Geneva, the UN Special Envoy for Syria, Staffan de Mistura, said is critical that the momentum provided by the negotiations “outpace” those that wished to see the negotiations come to nothing.

“There are spoilers, we have seen it all the time during the last talks and perhaps they may even be attempting or tempted to [do] something before or during the talks to provoke one side or the other to walk out,” he warned.

“I am not expecting a breakthrough, but I am expecting and determined for keeping a very proactive momentum,” said Mr. de Mistura, highlighted the need to “outpace” those wished to “spoil” the negotiations and see that it come to nothing.

“There is a rush between us and the spoilers […] we have to outpace those few but clear spoilers with momentum on the political track,” he added.

On the eve of the UN-facilitated negotiations between the parties to the conflict in Syria, Mr. de Mistura said he would be continuing to push for a resolution to the conflict based on Security Council Resolution 2254 that endorsed a road map for peace process in war-battered Middle East nation, including non-sectarian governance, a new constitution and free and fair elections.

Also, the UN envoy said that while the ceasefire remained fragile, it was largely holding and noted that “we would not have been able to have these talks if there was a breakdown of the cease-fire.”

Mr. de Mistura added that the bottom line remains that it is “delicate moment” and that there are fragile incidents but these need to be controlled and need to be taken care of.

In conclusion, he noted that one should not focus too much on the rhetoric and even dismissive statements but instead to “look for the substance, for what would happen during the talks and at the end of the talks,” he said.