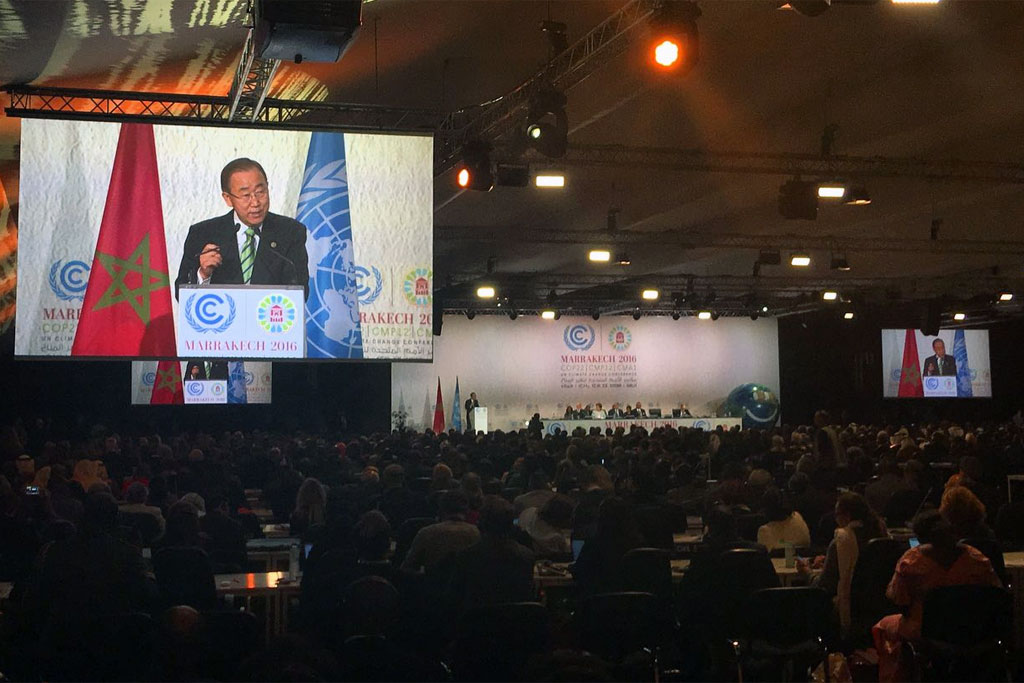 Ten days after the entry into force of the Paris Agreement on climate change, world leaders showed strong support for the implementation of this agreement at the opening of the high-level segment of the United Nations Climate Conference in Marrakech, Morocco, (COP 22) today.

“Countries have strongly supported the Agreement because they realize their own national interest is best secured by pursuing the common good. Now we have to translate words into effective policies and actions,” Mr. Ban said as he opened the High-Level segment of the 22nd Conference of Parties to the UN Framework Convention on Climate Change (UNFCCC).

“This is critical to protect our planet, safeguard the most vulnerable and drive shared prosperity. Low-emission development and climate resilience will advance all the Sustainable Development Goals (SDGs)”, added Mr. Ban.

Adopted by 196 States Parties to the UNFCCC last December, the Paris Agreement, so-named after the French capital where it was approved by the previous Conference, known as COP 21, aims to strengthen the global response to the threat of climate change by keeping the global temperature rise this century well below 2 degrees Celsius above pre-industrial levels and to pursue efforts to limit it to 1.5 degrees Celsius.

In early October, the accord cleared the final threshold of 55 countries representing 55 per cent of global emissions required for it to come into effect within one month. Its entry into force was extremely swift, particularly for an agreement that required a large number of ratifications and the two specific thresholds.

The Agreement entered into force in time for COP 22, which has been under way since 7 November. Before the meeting wraps up on Saturday, 18 November, parties hope to define the rules of implementation of the Paris Agreement and establish a viable plan to provide financial support to developing countries to support climate action.

Mr. Ban said that the United Nations will help countries implement the Agreement and he called on developed countries “to honour their commitment to mobilize climate finance – $100 billion by 2020 ¬– to help developing countries to mitigate and adapt to climate vulnerability.”

The UN chief also said that after a decade of making sure climate change was at the top of the international agenda, he would leave delegations with some key lessons:

In his remarks, the President of the UN General Assembly, Peter Thomson, encouraged all Parties to the Paris Agreement to implement and enhance ambition of their nationally determined contributions (NDCs) “without delay.” He added that urgent action on climate change “must be seen as a moral, environmental, scientific, and developmental imperative, guided by ambition, action and equity.”

The Executive Secretary of UNFCCC, Patricia Espinosa, stressed in her remarks the need to “accelerate climate action” and “to make climate action a cornerstone of the transformation to truly sustainable development.”

“This profound transformation will not be easy and will involve difficult decisions. Leadership is needed now more than ever. And the contribution to this transformation by business, subnational governments, indigenous people, youth, women and many others cannot be overlooked,” she added.

Ahead of the official opening of the high-level segment of the Conference, Mr. Ban told a press conferencethat “every country is aware that climate change is a reality” and “no country, however resourceful or powerful, is immune from the impacts of climate change.”