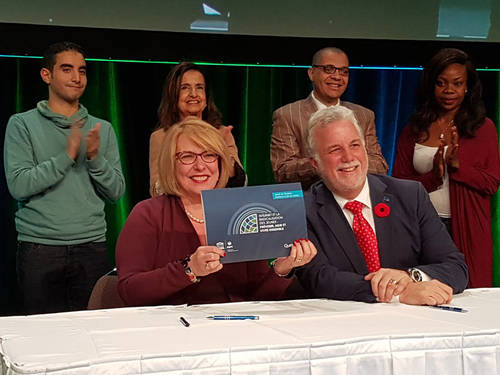 Participants at the international conference, Internet and the Radicalization of Youth: Preventing, Acting and Living Together, organized by UNESCO and the Government of Quebec in Quebec City, Canada, from 30 October to 1 November, have reaffirmed the positive potential of information technologies to build bridges among people and convey narratives that counter hate speech and violent extremism.

Throughout the event, 500 participants from some 70 countries stressed that violent extremism does not reflect the tenets of any religion, culture or ethnic group.

At the conference, the Director-General of UNESCO, Irina Bokova, emphasized that responding to extremists’ use of the internet required the engagement of a digital citizenry, educated to exercise critical thinking: “I see this as a new global struggle of ideas, a struggle for hearts and minds. Young women and men must have knowledge to claim humanity’s cultural heritage and diversity as their own and they must have skills to build dialogue through diversity. This means nurturing the internet’s full potential for peace,” she argued.

“We cannot fight alone. We need the international community to cooperate and strengthen efforts to prevent youth radicalization and fight against violent extremism in all its forms,” said Chafica Haddad, Chair of UNESCO’s Information for All Programme (IFAP), a co-organizer of the conference.

Speakers also voiced commitment to freedom of expression online and encouraged all stakeholders to facilitate access to all information and communication platforms, and promote narratives that condemn violence and hate speech, promote inclusion, equality, intercultural dialogue and peace.

Anantha Kumar Duraiappah, Director of the UNESCO Mahatma Gandhi Institute of Education for Peace and Sustainable Development (MGIEP), said we needed “to fire the Gandhi neurons of young people,” emphasizing the value of, and need for; compassion, empathy, and moral courage.

Internet is not the problem, contended many participants. “We should work on why young people yield to propaganda and messages for youth radicalization,” said one young participant, Kouakou Wilfried from Abidjan, Côte d’Ivoire, who reflected many experts’ view that youth radicalization could only be contained through a multidimensional approach.

“Pulling hate material from the internet will never be enough to curb the phenomenon of violent extremism, because when one website goes down, two or three more are up the very next day,” explained Ross LaJeunesse, Head of International Relations at Google. “You need to engage the speakers who are promoting radicalization and hate online and prepare our communities to respond or counter them with better arguments and facts.”

“Most importantly we must engage young people in the consolidation of peace,” argued Ahmad Alhendawi, UN Special Envoy for Youth, recalling UN Resolution 2250, which calls for better representation of youth in decision making at all levels.

On the last day of the conference, the Premier of Quebec, Philippe Couillard, and the Minister of International Relations and la Francophonie, Christine St-Pierre, launched the Call of Quebec that is to rally support for a responsible response to radicalization online.