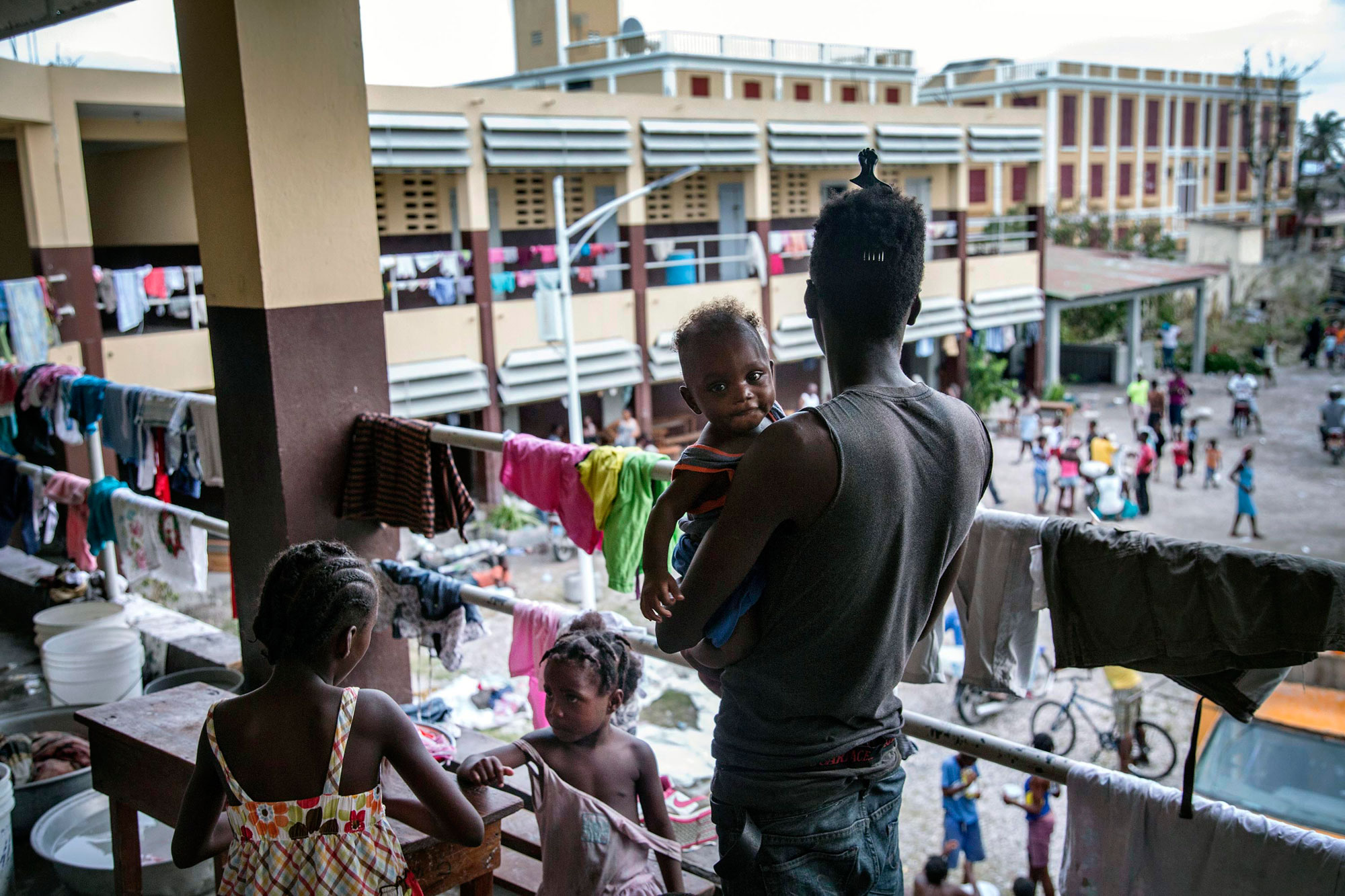 One week after Hurricane Matthew slammed into Haiti, United Nations agencies are continuing the massive relief effort under way on the ground, scrambling to fend off the threat of cholera, delivering life-saving supplies and rehabilitating damaged infrastructure, such as schools.

Yesterday, the World Health Organization (WHO) decided to send one million cholera vaccine doses and dispatch Dr. Dominique Legros, WHO’s cholera focal point, to Haiti at the end of the week to discuss with the Ministry of Health how to best use the vaccines.

WHO had already deployed some 80 staff from its regional office, and had also provided materials for cholera care, treatment centres, beds and materials for treatment of patients. The agency has also mobilized partners, such as Médecins Sans Frontières, known as Doctors Without Borders, which deployed 40 of its own staff.

“The top priority for people affected by the hurricane is to give them access to safe drinking water. It is the only way to control cholera on the long term in Haiti and elsewhere,” Dr. Legros told reporters in Geneva at the regular bi-weekly press briefing, noting that Hurricane Matthew hit at a time when cholera was still putting a heavy burden on the tiny Caribbean island nation.

In the context of flooding and potential contamination of drinking water by faecal sludge, WHO was concerned about the further increase in cholera cases, particularly at this time of the year, as there is usually an increment in cases reported between November and January, he said.

About a quarter of the health care facilities, or 35, including cholera treatment centres and units, have been either destroyed or seriously damaged in the south of the country, which caused problems of access to health care for patients, Dr. Legros said, adding that with partners, WHO staff are actively rebuilding health care facilities.

“It is necessary to plan for the worst case scenario and be ready to face the situation with all the usual elements of a response plan such as surveillance, access to safe water, and vaccines,” Dr. Legros said.

He said that before the storm, WHO had vaccinated about 400,000 people in Haiti, using 800,000 doses, or two doses per person, essentially in the central part of the country and towards Cap Haitien.

Another one million doses announced yesterday would cover 500,000 people, or one million people if a single-dose approach is used, Dr. Legros explained. Then the protection would be relatively short.

He went on to note that WHO has had one experience of a large-scale single-dose campaign in Bangladesh two years ago. It had proved effective for six months. After six months, there was still a 60 to 70 per cent effectiveness for severe cholera cases. After one year, the effectiveness had disappeared.

“Protection for six months would be enough to cover the period of highest risk in Haiti,” he said.

Dr. Legros said that since the beginning of the cholera outbreak in October 2010 there had been 790,000 cases and more than 9,000 deaths in Haiti. There had since been a sharp drop, but from 2014, cases have increased every year. In 2016, there had been 30,000 cases to date. Not having access to safe water is the main reason for these cases, he added.

Nearly 100 per cent of crops destroyed in hard-hit southwest

Meanwhile, the UN World Food Programme (WFP) has reported that in the country’s northwest, 60 to 90 per cent of the harvest has been destroyed, and the fishing industry was paralyzed because boats and fishing materials had been swept away. However in the southwest, where Hurricane Matthew made landfall, almost 100 per cent of the crops are gone.

Picking Up The Pieces. Credit: WFP

WFP spokesperson Bettina Luescher said that food for 300,000 people has been prepositioned in the country, and it has delivered food rations to more than 10,500 people in Jérémie and Les Cayes in the southwest. WFP has been flying aid workers into that part of the country as roads had been damaged.

Once the markets start working again, WFP will move to cash aid, the spokesperson said.

Education should not be forgotten in emergency situations

“Education should not be forgotten in emergency situations,” said Christophe Boulierac, spokesperson for the UN Children’s Fund (UNICEF) in Geneva.

In the storm’s wake, more than 100,000 children in Haiti are missing out on learning as their schools were either damaged or converted into shelters.

“At least 100,000 children today will not experience the joy, safety and stimulation that being in a classroom brings,” said UNICEF’s Deputy Representative in Haiti, Jean Metenier, in a news release. “We need to get them back to learning as soon as possible. Hurricane Matthew took away their schools, homes and textbooks. It shouldn’t take away their sense of hope.”

Schools have reopened across the country but, according to initial national estimates, at least 300 public schools have been partially or entirely damaged in the country and many others are being used to shelter displaced families. Schools in Sud and Grande Anse departments will remain closed for at least another week. Together with its partners ACTED and Oxfam, UNICEF has prepositioned emergency supplies for 10,000 people in the departments of Grand Anse and Sud, including water kits, water purification tablets, and mosquito nets. UNICEF has also provided a 10,000 liter water reservoir to the hospital in Les Cayes.

Meanwhile, Denis McClean, spokesperson for the UN Office for Disaster Risk Reduction (UNISDR) said it is totally unacceptable that hundreds of people could die in a disaster which was as well forecast as Hurricane Matthew.

“There had been plenty of time for warnings to be issued and for evacuations to take place,” he said. “The question now has to be asked: why, six years after the earthquake in Haiti, adequate multi-hazard warning systems were not in place to ensure a minimal loss of life in such events?”

UNISDR is calling for a zero-casualty approach to cyclones and hurricanes preparedness to be supported, in countries like Haiti, he stressed. This requires investment in disaster risk governance to ensure that warnings are disseminated and acted on.

People should know they have a safe place to go to in their neighbourhood, be it a church, a school or another public building, he said, urging greater efforts to ensure that populations in hazard-prone areas are risk-informed, and fully understand the nature of the threat they are facing.

Mr. McClean said that earlier this year, Fiji was hit by a Category 5 cyclone, the strongest storm ever to hit the island nation. The death toll was 44 even though one million people were affected. Similarly, India and Bangladesh had remarkable successes against major cyclone events, which in years past, would have cost thousands of lives. These lessons need to be applied elsewhere, he stressed.